Clearly the New York Times Magazine had zero idea just how much its heavily promoted 30,000-word climate story was going to rile up environmental activists. Or did they? The response to the Times article from the climate crowd was fast and furious – and was made possible by theTimes itself.

As EID pointed out last week, the Times story is a crushing blow to the infamous #ExxonKnew narrative funded by wealthy anti-fossil fuel organizations: that the energy company knew the “truth” about climate change decades ago, but covered it up to mislead the public. The Times, however, destroyed that narrative by showing that #EveryoneKnew as far back as the 1970s that climate change was real and happening, but there simply was little interest among elected leaders to do anything.

Activists were ready to pounce and show their deep displeasure with the story because the Times had actually provided activists the story in advance of publication. And if that’s not bad enough, top brass at the paper hosted a private dinner with activists the night before publication. If theTimes was unaware of the blowback about to hit them, they certainly heard from activists that night.

How do we know this? Because environmental activists couldn’t help themselves. 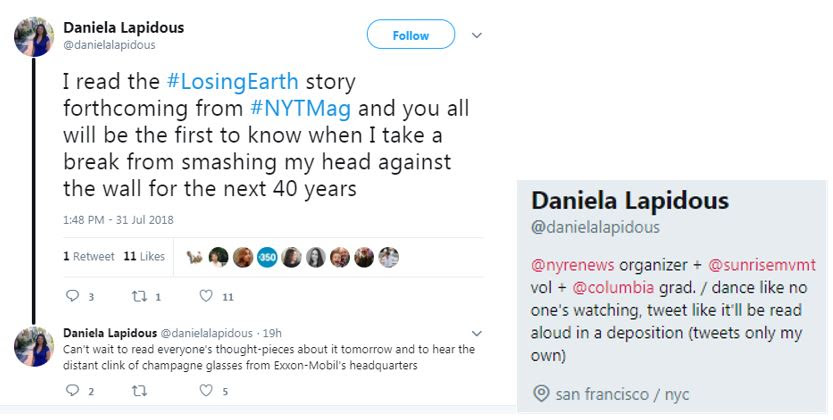 According to news reports, New York Times magazine editor-in-chief Jake Silverstein, Times executive editor Dean Baquet and publisher A.G. Sulzberger, along with the author of the piece, Nathaniel Rich, hosted a number of activists at a swanky hotel the night before publication. Reporters with the Huffington Post, Politico, E&E News and Yale University Communications School were also guests.

Minutes after the Times magazine piece went live, criticism came pouring in from the usual suspects.

The Atlantic, Mother Jones and the Center for American Progress’ blog ThinkProgress were all lined up and ready to pounce. The Mother Jonesarticle screamed, “The New York Times Fails to Name and Shame Climate Villains.” Meanwhile, ThinkProgress’ own resident climate blogger Joe Romm whined:

“The article’s thesis is that the reason we failed to act during this supposedly ‘decisive decade’ was neither Republican intransigence nor Big Oil’s efforts to downplay the issue and block action, but just human nature…But the claim that ‘nothing stood in our way’ is simply ahistorical.”

“Frankly, I think a lot is missing. The article feels tone-deaf to me. Its message, to quote the great and powerful OZ, seems to be ‘pay no attention to that billions-dollar fossil-fuel industry disinformation campaign behind the curtain.’ At a time when dark money and its poisoning of our politics is the greatest obstacle to averting catastrophic climate change, the author seems to want to give a free pass to the bad actors involved and instead engage in victim (‘us’) blaming.”

The debate also raged on Twitter, where activists tried to redirect people on social media to preferred outlets like InsideClimate News (bankrolled by the same foundations that fund environmental groups) and anti-oil and gas researcher Naomi Oreskes to control the message.

.@NYTmag‘s #LosingEarth argues that thanks to “human nature,” we’ve lost the climate fight.

Maybe news to NYT, but a movement millions strong knows who’s really to blame—fossil fuel billionaires. And we sure as hell haven’t lost yet. #RiseForClimate https://www.nytimes.com/interactive/2018/08/01/magazine/climate-change-losing-earth.html …

So, yes: I applaud the @nytimes for trying to put climate change in people’s living rooms this Sunday. It is the biggest challenge of our lives. But next time they should get the narrative right. Maybe start by interviewing @NaomiOreskes or reading this https://www.nature.com/articles/nclimate2875 …

Andrew Revkin, a reporter for National Geographic who previously wrote for the New York Times, defended Rich’s article from climate activists, noting that the very people who claim to want to solve the problem of climate change also reject nuclear energy. Revkin seems to suggest that climate activism is less about solving climate change and more about demonizing and blaming the fossil fuel industry.