by P Gosselin / Aug 1, 2018
The media like the New York Times herehyperventilated over Japan setting a new all-time record high temperature on Monday.

According to the Times, the temperature hit a high of close to 106 degrees on Monday at a Japanese location outside Tokyo.
Japanese blogger Kirye, who happens to live in Tokyo, informs that temperature reading was recorded at the Kumagaya weather station, some two hours outside of Tokyo.

It turns out there’s a story behind that all-time “record high” and that it likely got a little help.

Kirye decided to take the 2-hour commute to Kumagaya. Armed with a SEEK brand thermal imaging attachment for her mobile phone, she made thermal-image photos of the record-setting station. 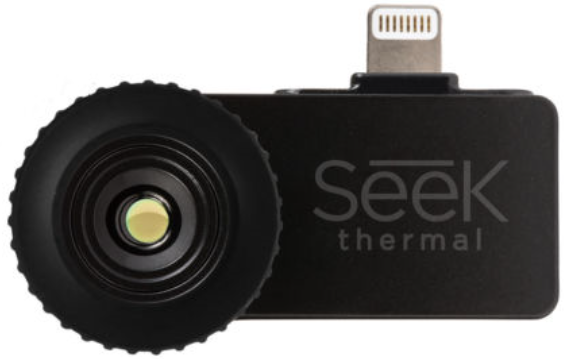 It turns out that the record temperature that the media like the Times got all excited about has little to do with global warming, but likely a lot more with the urban heat island effect, where nearby asphalt, steel and concrete act as huge summertime heat sinks and so distort the readings of nearby instruments.

What follows is the daytime photo of the entrance to the Kumagaya weather station (All of the following images are the property of Kirye, and may be used only by linking to this post!): 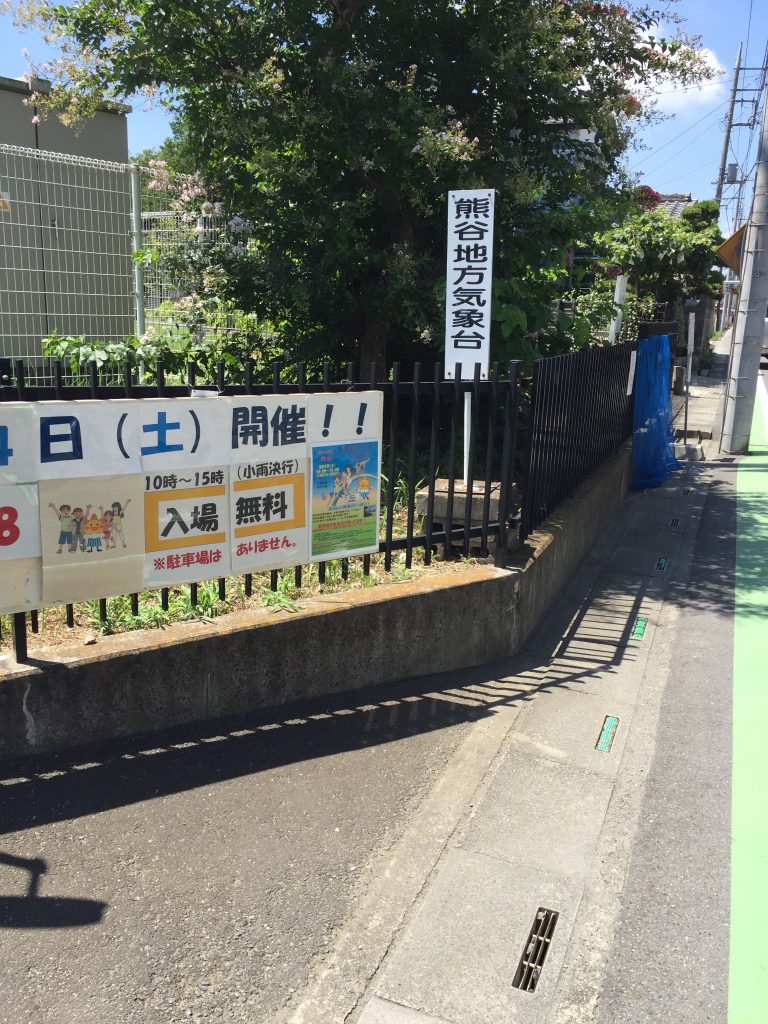 Note in the photo above the tall building to the left and surrounding asphalt street and concrete and steel structures.

Next is a photo Kirye made of the weather station itself: 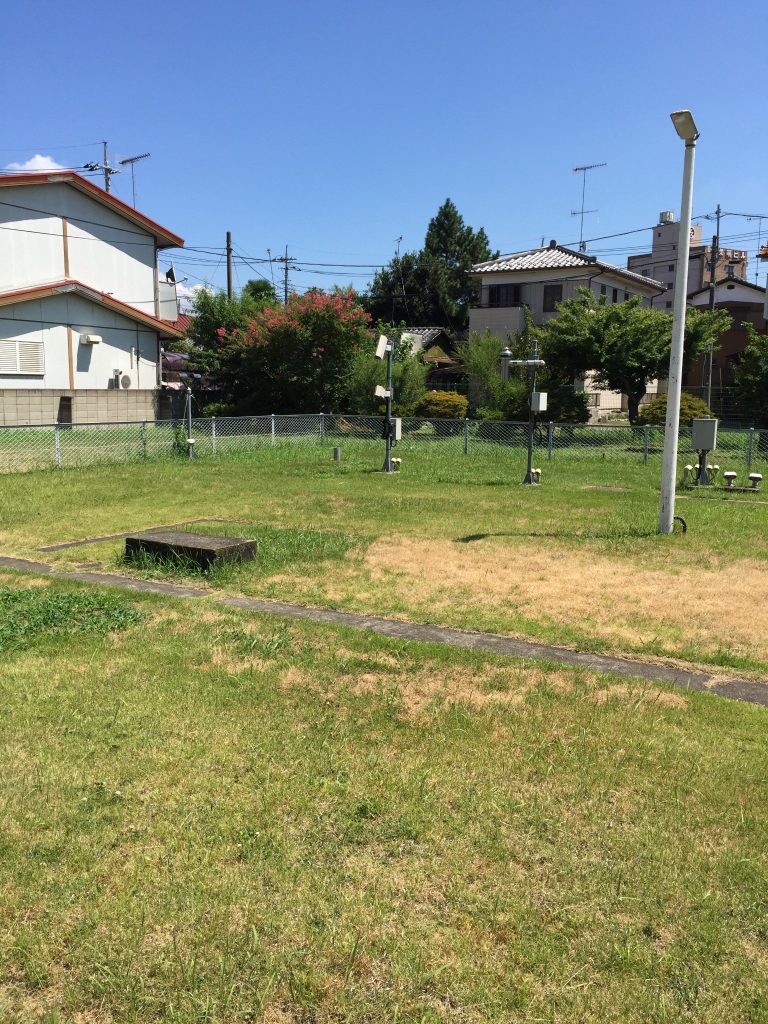 Then she made a thermal image of the photo and then placed it side by side for comparison: 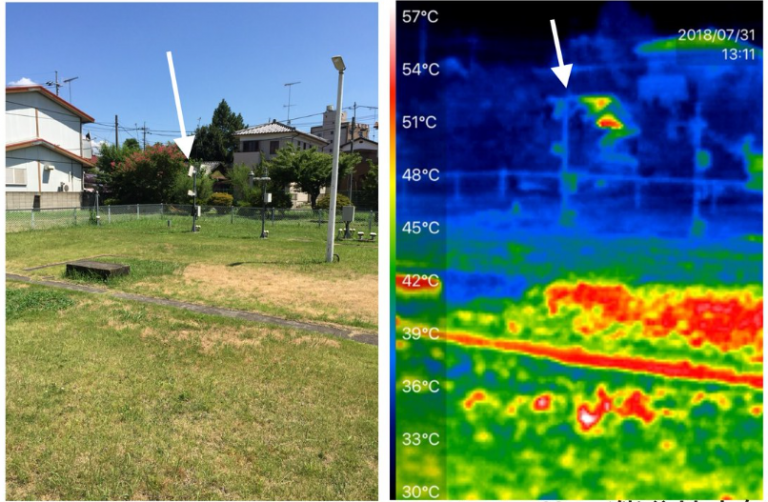 The white arrows in the images indicate the equipment containing the thermometer. Although the siting of the instruments is not as bad as some we’ve seen documented by Tony Watts, it is far from being optimally sited, located in an urban environment, surrounded by buildings and other heat sinks.

What follows is another view. Note the 55°C hot concrete pad on the ground right near the instruments: 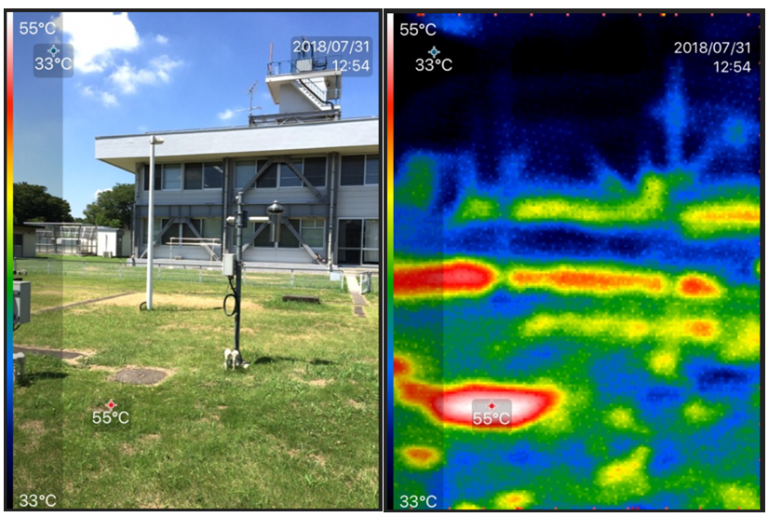 Spider webs choking up the instruments?

Kirye also informed NoTricksZone that an official of Meteorological Office told her that they were cutting the weeds to keep them from growing. They also told her that the device with the thermometer “may have spider webs in its air port” and they “would also check it.”

Yet don’t expect NASA to rush to adjust the temperature downward here, should that station data in fact be used.

By the way, NASA assigned a Brightness Index (BI) of 82 for that station, which is way above the index of 10 or less that is needed to qualify it as a “rural” station. That index shows pretty urban conditions.

To illustrate the urban heat island (UHI) effect further, Kirye also made thermal images of Tokyo at night. The following was taken 2 days ago at some 28 minutes past midnight: 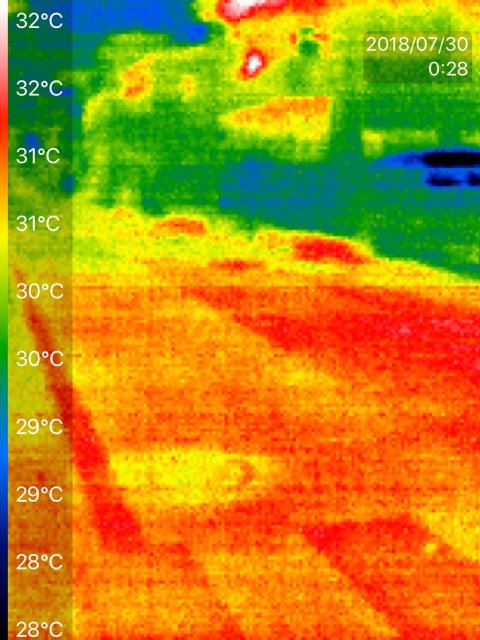 This is a picture I took using my thermography camera in Tokyo’s densely built-up area. This is a known problem that asphalt-paved roads make tropical nights, but alarmists think that is the result of AGW.”