New Paper: 54% Of ‘Vulnerable’ SW Pacific Islands Studied Had Shorelines That EXPANDED From 2005-2015

New Paper: 54% Of ‘Vulnerable’ SW Pacific Islands Studied Had Shorelines That EXPANDED From 2005-2015

Despite a rapid local sea level rise rate nearly 3 times the global mean (1.8 mm/yr), 15 of 28 studied atoll islands in the southwest Pacific increased in shoreline area during 2005 to 2015 according to a new study (Hisabayashi et al., 2018). For the 3 islands that experienced extreme shoreline erosion – with one atoll island even “disappearing” – a Category 5 cyclone was identified as the most likely causal factor.

Consequently, the authors conclude that “the dramatic impacts of climate change felt on coastlines and people across the Pacific are still anecdotal”.

Summary: “Atoll islands are low-lying accumulations of reef-derived sediment that provide the only habitable land in Tuvalu, and are considered vulnerable to the myriad possible impacts of climate change, especially sea-level rise. This study examines the shoreline change of twenty-eight islands in Funafuti Atoll between 2005 and 2015 … Results indicate a 0.13% (0.35 ha) decrease in net island area over the study time period, with 13 islands decreasing in area and 15 islands increasing in area. Substantial decreases in island area occurred on the islands of Fuagea, Tefala and Vasafua, which coincides with the timing of Cyclone Pam in March, 2015.” 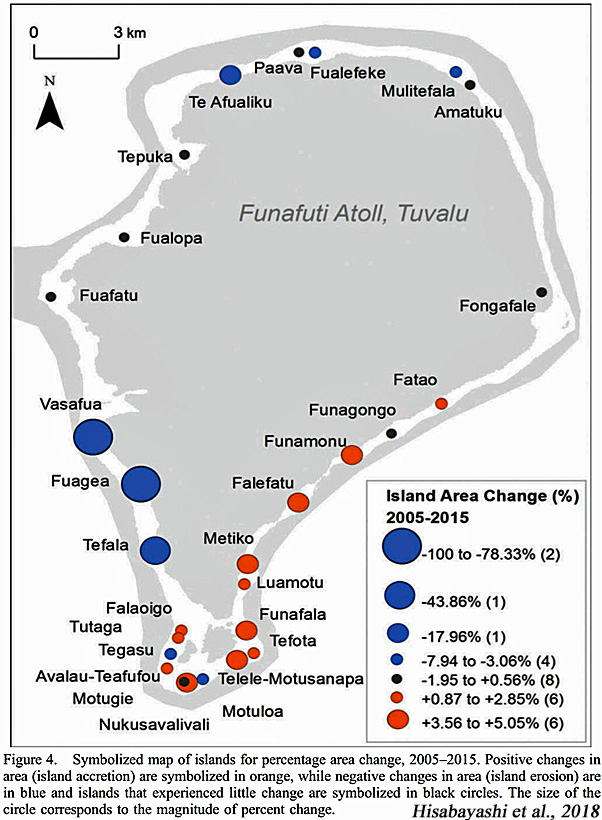 “The imagery captured in 2015 reveals a significant change in shape and size of the vegetated area for all three islands, and Vasafua’s vegetation is completely missing in the 2015 image. These drastic differences between the 2014 and 2015 imagery are most likely the impacts of Cyclone Pam, which was a Category-5 tropical cyclone that struck the Pacific region on March 9–16 in 2015. Substantial decreases in island area were detected in three small, uninhabited islands all located in the southwestern rim of Funafuti Atoll (Fuagea, Tefota, and Vasafua). … The most drastic changes in these islands occurred between December 2014 and June 2015, which we deduce to be the impact wrought by the Category 5 Cyclone Pam that passed through the southwest Pacific Ocean in March 2015…. [T]he level of details observed in this study on Vasafua islet that lost all vegetation due to Cyclone Pam would not have been detected if not for the availability of fine spatial resolution data and the short revisit times.” 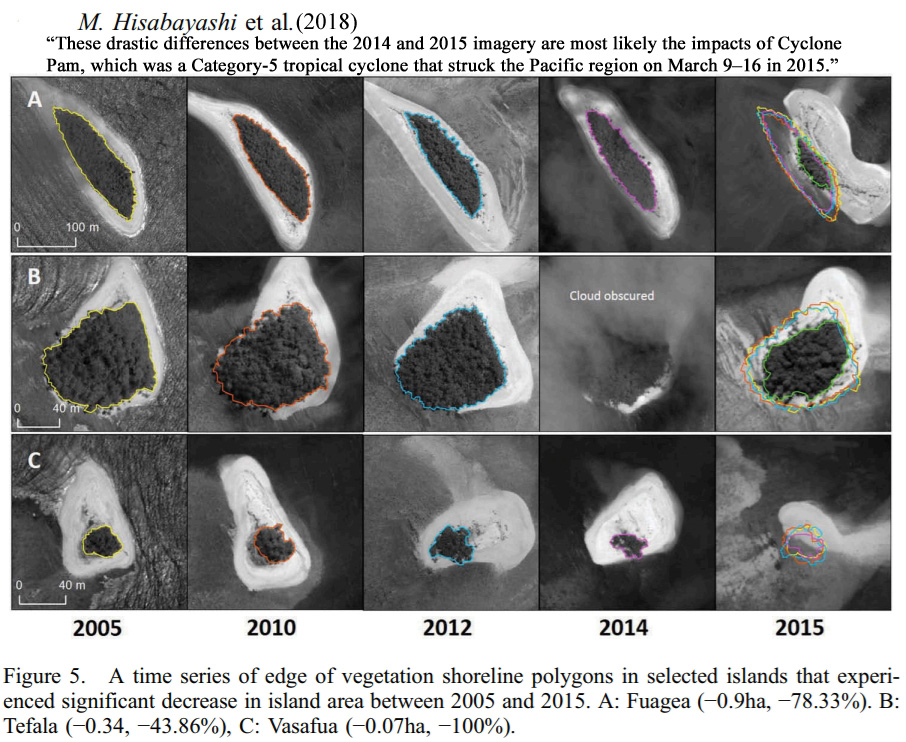 “Some studies (Leatherman, Zhang, and Douglas 2000; Romine et al. 2013; Albert et al. 2016) have systematically/rigorously shown the relationship between sea-level rise and shoreline changes, but the dramatic impacts of climate change felt on coastlines and people across the Pacific are still anecdotal and highlights the urgent need for further research.”