By Kenneth Richard , No Tricks Zone

Unearthed new evidence (Mangerud and Svendsen, 2018) reveals that during the Early Holocene, when CO2 concentrations hovered around 260 ppm, “warmth-demanding species” were living in locations 1,000 km farther north of where they exist today in Arctic Svalbard, indicating that summer temperatures must have been about “6°C warmer than at present”.

In these 3 new papers, none of the scientists connect the “pronounced” and “exceptional” Early Holocene warmth to CO2 concentrations.

“Shallow marine molluscs that are today extinct close to Svalbard, because of the cold climate, are found in deposits there dating to the early Holocene. The most warmth-demanding species found, Zirfaea crispata, currently has a northern limit 1000 km farther south, indicating that August temperatures on Svalbard were 6°C warmer at around 10.2–9.2 cal. ka BP, when this species lived there. … After 8.2 cal. ka, the climate around Svalbard warmed again, and although it did not reach the same peak in temperatures as prior to 9 ka, it was nevertheless some 4°C warmer than present between 8.2 and 6 cal. ka BP. … The occurrence of the blue mussel, Mytilus edulis, suggests that climate around Svalbard was 2°C warmer than at present as early as about 11 cal. ka BP.  The climate was about 6°C warmer than at present between 10.0 and 9.2 cal. ka BP, as shown by the presence of Zirfaea crispata.  One single specimen of Mytilus is dated to 900 years BP, suggesting a short-lived warm period during the Medieval Warm Period of northern Europe.” 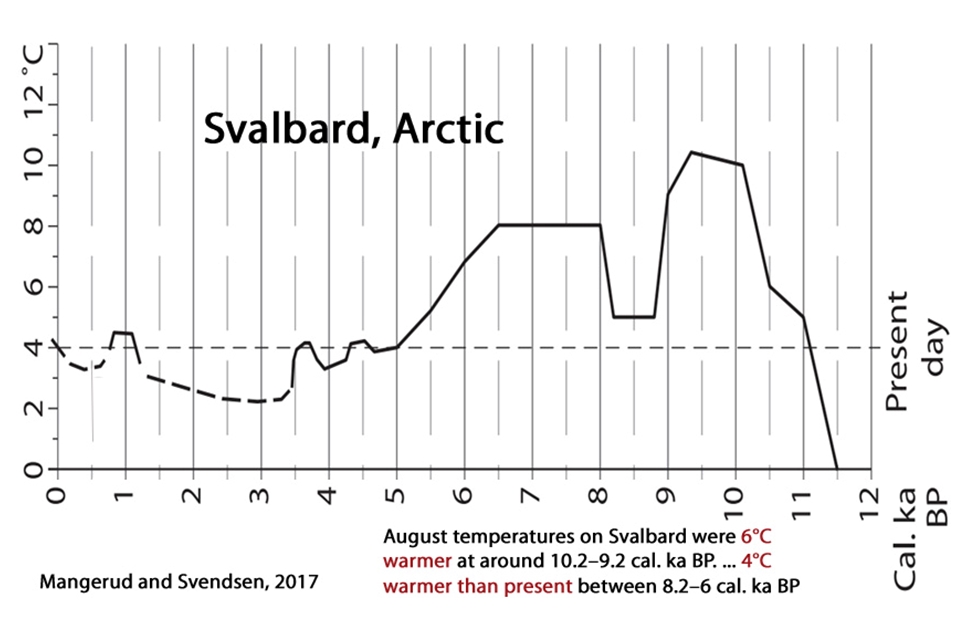