Morano: 'Kids from kindergarten through college are prime targets for the climate change fear promoters’ propaganda.'

'Black and brown people are essentially being told they can never be allowed to have the same standard of living that the predominantly white Western world has enjoyed since the Industrial Revolution.'

'It’s not enough for the warmists to regulate our light bulbs, coal plants, and SUVs. Now they want to regulate the size of our families.' 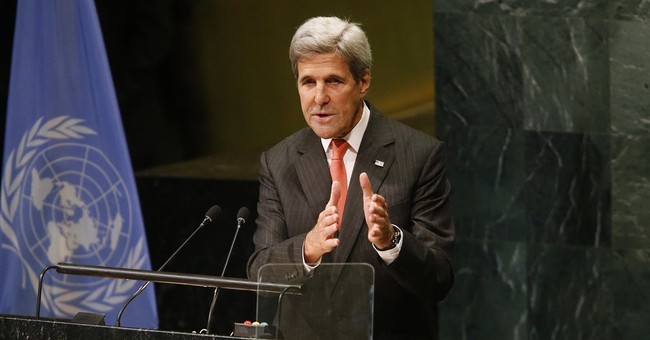 Editor’s Note: The following is an excerpt from author Marc Morano’s new book, The Politically Incorrect Guide to Climate Change.
If you can’t indoctrinate adults on climate change, who is a more willing and pliable audience than children? John Kerry signed the Paris climate pact at the UN with his two-year-old granddaughter seated on his lap for full effect. Kids from kindergarten through college are prime targets for the climate change fear promoters’ propaganda. Politicians, academia, Hollywood, and global warming activists have focused on kids, feeding them a steady diet of fear and doom, using vulnerable children to promote climate fears. The media and Hollywood amplify these tactics: everyone, from ABC News to Leonardo DiCaprio, is of the opinion that “We need to get kids young.”

The Politically Incorrect Guide® to Climate Change is designed to provide you with the facts you need to understand and resist this baseless political agenda. Read on to equip yourself against the lies that your children are being taught in school – or even the lies you are being taught yourself.

1.     Climate change activists care more about the earth than they care about YOU.

Climate change activists want to regulate the size of our families. On the one hand, activists believe climate change threatens the children. On the other hand, having children is terrible for the environment. So U.S. environmentalists are taking a page from China’s mandatory one-child policy, even as China abandons the policy. It’s not enough for the warmists to regulate our light bulbs, coal plants, and SUVs. Now they want to regulate the size of our families. In 2007, Bill Nye featured a professor on his Netflix program, Bill Nye Saves the World, warning that having too many kids is bad for the planet. Nye asked, “So, should we have policies that penalize people for having extra kids in the developed world?” Professor Travis Rieder responded, “I do think that we should at least consider it.” And Nye answered, “Well, ‘at least consider it’ is like ‘Do it.’” A later NPR segment featured professor Rieder saying, “we should protect our kids by not having them.”

According to several analyses, global temperatures have been essentially holding nearly steady for almost two decades. Not that you’d know it from the media and climate activists. USA Today blared that “the planet sizzled to its third straight record warm year in 2016.” Former vice president Al Gore also touted 2016 as “the hottest year on record – confirmed by NASA and NOAA (the National Oceanographic and Atmospheric Administration).” The New York Times claimed that the 2016 heat “record” was “trouncing” previous years’ temperatures. The Times used phrases like “blown past” to describe the alleged heat record. Curiously, though, the actual numbers for “the hottest year” claim did not appear in the Times piece. “We are not told what the average global temperature was, how much higher this is than last year’s record or any previous records,” wrote Robert Tracinski of The Federalist, “Or what the margin of error is supposed to be on those measurements.”