Morano: "If you look at actual data, in 2003, in the month of August, in Europe, 35,000 people died, 14,000 in France alone, from a heat wave. Widely blamed on the fact they didn't have enough air-conditioning and air-conditioning wasn't widely available. So as we go forward, you look back to the 1930s, thousands died in heat waves. Heat waves kill. Air-conditioning saves lives."

Stuart Varney: >>> A study finds, wait for it, increased air conditioner use will lead to nearly 1000 extra deaths and cost the economy $9 billion every year by mid-century. Joining us now, ClimateDepot.com founder, Marc Morano. Let me see if I got this right, mark. It is not the air coming out of the air conditioners. It is energy required to cool the air, so much that it increases global warming and kills people. That is the way this is supposed to work out, correct? Marc Morano: >> Yes. There have even been calls — because of this alleged crisis — to ration air–conditioning. The problem, even if you buy this study, which actually says, uncertain computer models estimate what is going to happen in the year 2050. If you look at actual data, in 2003, in the month of August, in Europe, 35,000 people died, 14,000 in France alone, from a heat wave. Widely blamed on the fact they didn’t have enough air-conditioning and air-conditioning wasn’t widely available. So as we go forward, you look back to the 1930s, thousands died in heat waves. Heat waves kill. Air-conditioning saves lives. What is interesting in Europe as well, they are actually now trying to ration heaters in the winter, by increasing electric bills. Huge number of senior citizens in England that die every year. This is classic dilemma of humans allegedly causing global warming. Humans, by dealing with it, they have air-conditioning. Now we have the whole thing where the air-conditioning, instead of being available will be restricted to prevent global warming which will cause more lives.

Varney: The public will not buy this. If this is ever put to a vote, we’re not going to vote for it. I just can’t see that how about you?

Morano: No. That is the problem. These are never put to a vote. These are usually done in the back corners of bureaucracy, little things called the Clean Power Plan that Obama, oddly named Clean Power Plan, that Obama Administration passed and now the Trump administration trying to undo. They all happen behind the scenes in bureaucracy, as you slowly get strangled. People ask why is air-conditioning so much, why is heating so much, I would not discount their ability to achieve these controls. Our ability to control indoor air is phenomenal. We can heat and cool. Our ability to control the outside air, climate, weather, temperature, are poorly understood, not even possible. It harkens to medieval witchcraft to think your air conditioner can control the climate.

Varney: Marc, you got to right again. See you, sir.

Air conditioners may save you from the humidity and brutal summer heat, but according to a new study from the University of Wisconsin-Madison, it could also be killing you.

The study, published in early July, found the increased use of air conditioning in buildings could actually contribute to global warming by further degrading air quality, and worsening the toll of air pollution on human health. In fact, researchers estimated that it could contribute to an additional 1,000 deaths per year in the Eastern U.S.

Not everyone agrees with the study though. According to ClimateDepot.com founder Marc Morano, air conditioning doesn’t kill people; it saves lives.

During the Chicago heat wave 1995, temperatures soared to blistering heights, resulting in the deaths of 739 people, most of whom could not afford air conditioning. And in 2003, a heat wave across Europe — the hottest summer on record — led to thousands of deaths, with some analysts placing the death toll at more than 70,000.

Modeling Study: Increased use of A/C to cope with predicted heat waves in 2050 will kill more due to increased air pollution from the A/C

‘Turn up the AC — please! – Air conditioning is a human right’ – “If this heatwave has taught me anything, it’s that the 30 UN human rights — including equality, privacy, freedom of expression, food, clothing, housing and time off work — are essential and admirable. But they can’t beat air conditioning.”

2016: Washington’s War Against Your Air Conditioner – John Kerry explained in a speech in New York last month, the Obama administration targeted HFCs. Kerry conceded that since ratification of the Montreal Protocol “nearly 100 of the most ozone-depleting substances have been completely phased out. As a result, the hole in the ozone layer is shrinking and on its way to full repair.” “The bad news is that the substances banned by the Montreal Protocol have been replaced by substances that cause a different kind of danger,” Kerry said. “HFCs may be safer for the ozone, but they are exceptionally potent drivers of climate change itself, often thousands of times more potent than, for example, carbon dioxide.” 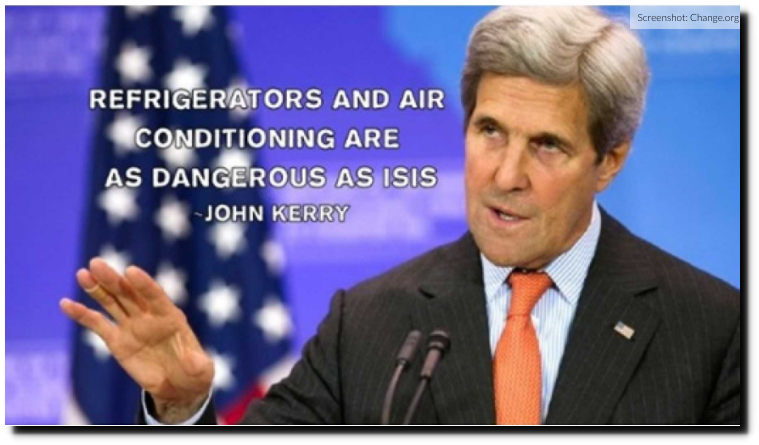 Kerry: Regulating refrigerator chemicals are ‘of equal importance’ to battling ISIS – Kerry made the remarks as part of a pep talk for negotiators working through the weekend to amend a 1987 treaty called the Montreal Protocol to deal with the chemicals used as refrigerants. “Yesterday, I met in Washington with 45 nations — defense ministers and foreign ministers — as we were working together on the challenge of [the Islamic State], and terrorism,” he said. “It’s hard for some people to grasp it, but what we — you — are doing here right now is of equal importance because it has the ability to literally save life on the planet itself.”

2016: Wash. Post writer: ‘I don’t need air conditioning, and neither do you’ – ‘A/C made Americans greedy and silly’ – Touts ‘lower carbon footprint’

2015: Discovery Mag.: ‘Is Air Conditioning Killing the Planet?’ – ‘The desire for a more comfortable and cooler home and office will likely make the planet bake even faster.’

2010: Lifestyle Control: In the heat wave, the case against air conditioning — Call to end ‘lavish use in everyday life’ – ‘Turning buildings into refrigerators burns fossil fuels, which emits greenhouse gases, which raises global temperatures, which creates a need for — you guessed it — more air-conditioning…health benefits during severe heat waves do not justify its lavish use in everyday life’

2018: ‘The World Wants Air-Conditioning. That Could Warm the World’

NYT: ‘Should Air-Conditioning Go Global, or Be Rationed Away?’ — Is A/C a modern-day right like clean water…or an unsustainable luxury that we should give up or ration?’ – Author Stan Cox [email protected] says A/C is ‘A Luxury the World Can’t Afford’ — ‘The resulting greenhouse emissions create need for even more air-conditioning there’s little we can say until we end our own society’s dependence on lavish cooling’