German climate and weather analyst “Schneefan” (Snow Fan) here writes a summary of the first half of 2018 thus far. All data show that the surface temperature of the globe has been cooling strongly over the past months and polar ice mass growing.

He writes that in the first half of this year we have seen weak solar activity and La Nina conditions acting to cool the globe’s surface. Moreover Arctic and Antarctic ice mass have grown in comparison to the previous years.

The 2-meter surface temperatures have reached there lowest levels so far this year:

Arctic sea ice area remains within the normal range at the start of July 2018, and according to the University of Bremen and the Alfred Wegener Institute (AWI), it is even higher than the previous years:

Though sea ice area being within the normal range may not sound impressive at all, it is yet remarkable in light of the fact that just ten years ago some scientists warned that there would not be any Arctic sea ice left come late summer!

Schneefan reports that what’s “especially amazing” is the “powerful growth” in Arctic sea ice volume, which has surged well above the mean of the previous years, according to the data from the Danish Meteorological Institute (DMI):

Japanese climate skeptic Kirye at Twitter confirmed the growing Arctic ice volume, as she has produced and posted a wonderful GIF graphic animation showing the course of Arctic sea ice volume for the past weeks compared to the past 16 years: 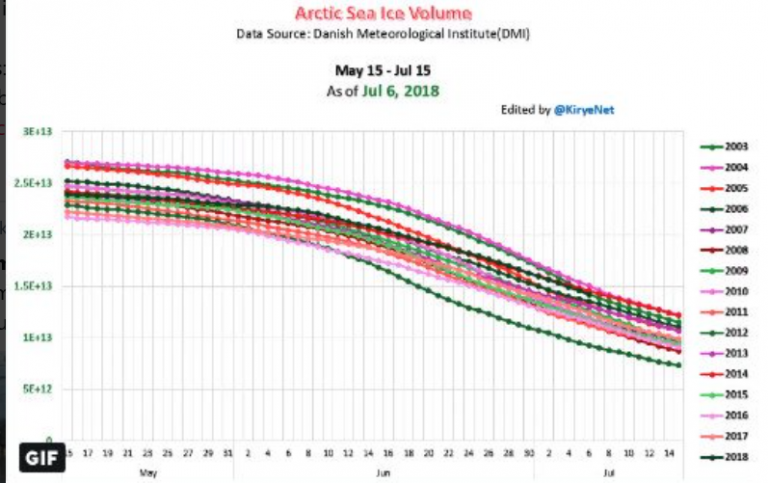 Antarctic sea ice area has also grown significantly since last year and has rebounded to a normal level. As of July 5, sea ice extent was just under 12 million sq. km.

Schneefan also reports that Greenland ice mass balance grew for the first time in the current century, and was just recently (July 1st) some 75 billion tonnes above the WMO 1981-2010 climate mean.

Also the mid troposphere at about 7500 meters altitude (400 hPa) shows a very cool temperature level compared to the other years since 2002: