TOTAL FAILURE of the climate crusade: Coal power has the same energy share it had 20 years ago

A couple of days ago, we noted that this year’s edition of BP’s annual Statistical Review of World Energy report on global energy use is out, and it contains one of the most telling charts about the failure of the climate crusade’s “war on coal” ever presented.

Most of the lamestream media coverage has focused on this particular chart from the BP report,  which shows coal having a small uptick in 2017 after several years of decline. Doesn’t look like much, does it? Just a blip. Nothing for the enviro-faithful to worry about, the net trend is still down, right? They are blaming president Trump for it.

But, despite Trump’s focus on putting coal miners back to work during his presidency, that really doesn’t figure in much for the rest of the world.

Here is the real kick in the pants for environmentalists from the BP report:

In 1997, coal power had a 38 percent share of global power generation.

And….in 2017, despite billions being thrown at renewable energy, it still had a 38 percent share of global power generation.

The idea that Al Gore, Bill McKibben, and their army of trained flying monkeys hell bent on stamping out coal use have made a difference in the past 20 years of climate crusading just went up in smoke. But, get this, their buddy, George Soros, has invested millions in coal, according to the Guardian.

Meanwhile, in the USA, greenhouse gas production drops for the third straight year,

h/t to Marc Morano (via email)

UPDATE: WUWT Author David Middleton adds this graph in comments, noting that CO2 emissions from coal use have risen sharply. 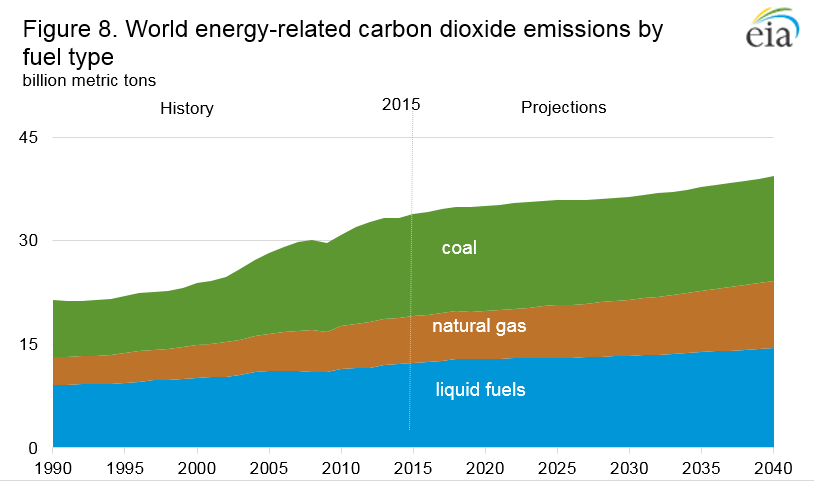 That’s why the planet is greening.