EPA Chief Pruitt Fires Back At DC: ‘We have an opportunity to get things right for decades to come’ 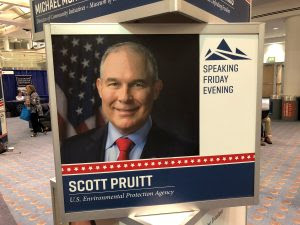 Calling his agency’s approach in the past “wrongheaded,” Environmental Protection Agency Administrator Scott Pruitt fired back at Washington, D.C., rejecting the false choice between air and water quality and a growing economy in an exclusive interview with Western Wire.

Pruitt also spoke before hundreds of conservative activists at the Western Conservative Summit in Denver Friday. The convention is hosted by Colorado Christian University.

“The past administration had an unapologetic declared war on a sector of our economy,” Pruitt said, including fossil fuels, and manufacturers but also farmers and ranchers. “That just to me is so wrongheaded.”

“We have done such a great job advancing air quality since the inception of the Clean Air Act while growing our GDP,” Pruitt said. “Our CO2 footprint fell 20 percent from 2000 to 2014 through innovation and technology, not government mandates.”

This week, the EPA rolled out a “500 Days of American Greatness” campaign, touting its successes over the first year and a half in withdrawing from the Paris climate agreement, reducing regulations that could save Americans $1 billion, repealing the controversial Clean Power Plan and Waters of the United States rules, and ending “sue and settle” abuses.

“The American citizen in our economy and what we’ve done to advance these key issues, we’ve done it better than anybody in the world,” Pruitt said. “Our job is to tell the story. We shouldn’t pick winners and losers. We shouldn’t use regulatory power to engage in a weaponization of the agency.”

In addition to his speech, Pruitt spent Friday afternoon speaking with his Region 8 staff and state delegations.

“I spent some time at our Region 8 headquarters meeting with state delegations from all six states,” Pruitt said, in a conversation with Region 8 Administrator Doug Benevento. The bulk of the discussions focused on air and water quality, along with Superfund efforts across the West.

“It was very constructive,” Pruitt said.

“What I love about it is I’ve put a lot of emphasis on cooperative federalism to ensure we are interfacing with the states and actually trying to advance environmental outcomes through better use of state implementation plans,” Pruitt said. He pointed to the previous administration’s emphasis on enforcing federal implementation plans.

“There’s been an awakening of states that are very excited about revisiting the commitment to cooperative federalism,” he said. “These meetings are very important.”

Working with the West rather than against it is a sea-change from the previous EPA leadership.

“I think that’s missed from a Washington, D.C. perspective,” Pruitt said, noting his bipartisan work with the Western Governors’ Association and Democratic governors like Steve Bullock of Montana and John Hickenlooper of Colorado.

“I was there onsite, recognizing the failure of the agency,” Pruitt said, referring to the Gold King Mine spill initiated by the EPA in 2015 in southwest Colorado. “[T]hey caused the spill in the Animas River and then walked away from responsibility to private property owners in Colorado, New Mexico, and Utah.”

Pruitt said that now, the Western Governors’ Association is a “key partner” with his agency.

On Superfund cleanups, Pruitt said that 2017 saw a three-fold increase in delisting, and even more this year. He addressed farmers and ranchers in the West by tackling the Waters of the United States rule, which designated dry river beds and other questionable areas as “waters” and therefore subject to EPA rulemaking. 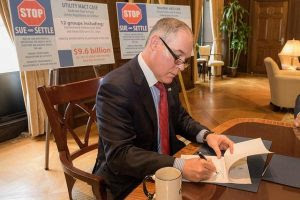 “We are actually hearing from stakeholders. They say, ‘WOTUS killed us, fix it,’” Pruitt said. “We ought to be talking to those that we regulate.”

“The citizens across this country care about water and air quality,” Pruitt said. “There are bad actors in the marketplace, and we should prosecute those bad actors. But we shouldn’t start from the presumption that all industry, farmers, ranchers, don’t care about the environment.”

“To me what we’re doing is less deregulation, and more regulatory reform. We’re getting rid of the deficient rules and providing answers consistent with our authority, recognizing the role of states and private property owners,” Pruitt said. “It’s a glorious time to be serving.”

Yesterday the agency announced it would explore cost-benefit reform when evaluating its regulations in and advance notice of proposed rulemaking (ANPRM), “soliciting public input on whether and how to change the way it considers costs and benefits in making regulatory decisions.”

“It’s just a night and day difference in the sense of how we approach these issues,” Pruitt said.

“While the Obama EPA estimated the social cost of carbon to be an average of $36 per ton of carbon dioxide emitted, this EPA calculated an average of $5 per ton,” the agency said in a statement Thursday.

The Wall Street Journal editorial board blasted the previous administration regulatory push that repeatedly underestimated costs of proposed regulatory action to push through a large slate of new rules.

“Barack Obama’s Environmental Protection Agency jammed through an average of 565 new rules each year during the Obama Presidency, imposing the highest regulatory costs of any agency. It pulled off this regulatory spree in part by gaming cost-benefit analysis to downplay the consequences of its major environmental rules,” the board wrote.

The EPA “gamed” the system, the WSJ argued, by introducing “social costs” and “social benefits” calculations into the deliberation. They called these interjections “scientifically imprecise” and “irrelevant” to the analysis of various regulations, like the Clean Power Plan or the Mercury and Air Toxics Standards.

Partnerships with the states, and governors in particular, has been a key focus in his time at the helm of the agency, he said. Instead of interagency interfacing with state departments of environmental quality and the EPA, Pruitt said, “go to the governors” and work directly with the states and not just regulators.

Pruitt said that following and enforcing the law, rather than creating new regulations that lacked legislative backing, was a key difference between his EPA administration and that of his predecessors.

“I’m very sanguine about our ability to defend what we do because we do something the previous administration didn’t, we actually do what the statute requires,” Pruitt said.

“It’s 5th grade civics. When you’re in the executive branch you enforce the law you don’t pitch hit for Congress,” Pruitt said.

According to Pruitt, the difficulties and pushback experienced by the previous administration on issues like the Clean Power Plan and Waters of the United States was self-inflicted.

“They literally made it up,” Pruitt said. “That’s not editorial comment, that’s what the courts have said.”

But pushing back against Pruitt’s efforts has created a cottage industry of deep-pocketed legal fellows under the guidance of a former deputy secretary and chief operations officer at the Interior Department under both the Clinton and Obama administrations, David Hayes.

In March, Hayes, Executive Director of the State Energy and Environmental Impact Center at New York University School of Law, spoke at a Denver climate conference, touting the new law fellowship he spearheads aimed at pushing climate initiatives and a commitment to the “goals of the Paris agreement,” and suing the current administration, through friendly state attorney general offices.

“Let me talk about state AGs . . . there is a tendency to think of state attorneys general as, ‘whoa, I don’t know if we’re ready to talk to them,’” Hayes said in March. “Those guys are the law enforcement folks.”

“When it comes to climate change and clean energy, they are enforcing the law in the way that I think all of us in this room want them to—at least the progressive AGs,” Hayes said.

Western Wire has reported on the fellowship, noting that New Mexico’s attorney general office was among the first seven states, and first in the West, to receive the fellows, alongside Illinois, Maryland, Massachusetts, New York, Washington, and Washington, D.C. The states are all members of the ‘Green 20’ group of attorneys general. So far, at least 14 fellows have been placed through the NYU fellowship program.

The “special assistant attorneys general” will “fight against regulatory rollbacks,” with particular attention paid to the EPA.

“We start with the statute, and then emphasize process with stakeholders having a say,” Pruitt said, pointing to the Administrative Procedures Act.

“If we do those things right, and we do it in a timely manner, which the agency has never done, we’ll be fine,” Pruitt said.

Wolk, Executive Director of the Colorado Department of Public Health and Environment (CDPHE) and Chief Medical Officer for the state of Colorado, joined Cox, President of Cox Associates and an expert specializing in quantitative risk analysis, on the CASAC committee.

As part of the seven-member CASAC, established under the Clean Air Act amendments of 1977, Wolk and Cox provide advisory recommendations to Pruitt on air quality and National Ambient Air Quality Standards (NAAQS), serving for three years.

“I knew coming in to this position, this has been a place with a worldview that is antithetical to everything we’ve been talking about,” Pruitt said, including regulatory reforms and a shift in agency priorities.

Pruitt described the agency’s mindset prior to his arrival as fixed in the false choice between the economy and the environment.

“It was about picking winners and losers. We can’t be about job growth and environmental stewardship,” Pruitt said, acknowledging his embattled position and frequent controversy. “With great change comes great opposition.”

Pruitt compared today’s “enhanced rhetoric”—referring to the acrimony and attacks—to that of the Reagan era.

“This is a transformative time, and we have an opportunity to get things right for decades to come,” Pruitt said.

President Trump offered praise Pruitt Friday, saying his EPA chief “is doing a great job within the walls of the EPA. I mean, we’re setting records.”

While Trump said Pruitt is “being attacked very viciously by the press,” he added that his top environmental regulator wasn’t “blameless.”

“He’s a man of courage and he’s a man of results. And he expects that from those who serve in the cabinet,” Pruitt said of his boss.

Earlier in the day, Pruitt told the Faith and Freedom Coalition’s annual Road To Majority conference that he believed the current administration’s efforts would have a lasting impact.

“There are certain times in history that when you’re living in them you recognize that what’s happening is going to impact generations into the future,” Pruitt said. “We must embrace, we must advance, we must make change.”

“Under President Trump and Administrator Pruitt’s leadership the EPA has gone from being an agency directed against Americans to agency working for Americans. As a member of the transition team, it’s exciting to see many of the policy action items being implement,” said Independence Institute Executive Vice President Amy Oliver Cooke, who was part of the Trump administration transition team for the agency. “The list of accomplishments from rolling back the controversial, costly Clean Power Plan to withdrawing from the Paris Climate Treaty is impressive. Administrator Pruitt has proven that the President’s philosophy—that we can responsibly develop our natural resources, be great stewards of our environment, and enjoy a thriving economy—can and does work.”

A handful of protesters gathered outside the Denver Convention Center to express their opposition to the conference. One of the protesters opposing Pruitt by name was Ron Binz, former chairman of the Colorado Public Utilities Commission. He was holding a sign that read, “Pruitt = Swamp Thing.” 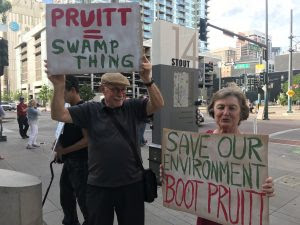 Binz withdrew his nomination as Obama’s pick to head the Federal Energy Regulatory Commission in 2013.

“Were down on Pruitt right now because of his misbehavior in office,” Binz told Western Wire.

“Appointing him to the EPA is the most cynical move I’ve ever heard of in Washington,” Binz said, comparing Pruitt to former EPA administrator Ann Gorsuch, a Reagan appointee, who resigned in 1983 amid controversy.