What Pruitt is really ‘guilty’ of is reining in the rogue Environmental Protection Agency: Opposing view 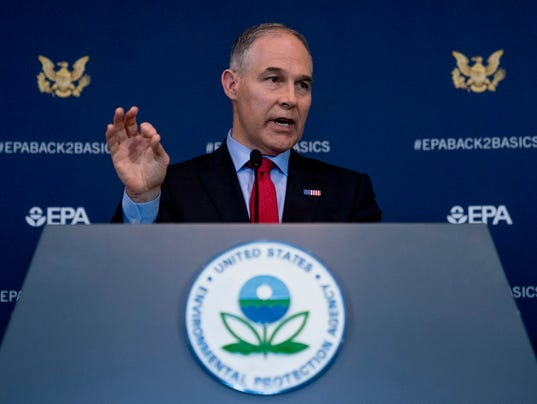 President Trump should ignore calls to fire Environmental Protection Agency Administrator Scott Pruitt. As mountains are made of molehills and double standards are everywhere, regulatory reform accomplishments are vilified for partisan reasons.

Yes, it seems that Pruitt made some avoidable but minor errors in judgment that he should have known would be blown out of proportion by opponents. But here’s what I weigh these trivial infractions against.

Executing on a President Obama campaign vow, the Obama EPA waged a partisan and junk science-fueled war against the coal industry. This gross abuse of power, combined with a glut of natural gas, erased 94% of the industry’s market value, bankrupted the largest companies, killed thousands of jobs, and wreaked havoc in local communities. By the time the Supreme Court reined in the agency, the damage was done. Instead of being chastised, Obama EPA chief Gina McCarthy publicly gloated about it.

OUR VIEW:Why Pruitt should go

That’s just one example of the many abuses of power of the Obama and Clinton EPA chiefs — all of whom, by the way, went out of their way to dodge public records laws. They improperly deleted email from hard drives, used email aliases, and deleted text messages to avoid the Freedom of Information Act.

What Pruitt is really “guilty” of is effectively executing Trump’s campaign promises and executive orders to rein in the rogue EPA. The war on coal is over. So is the Obama EPA’s bid to extend jurisdiction over every square inch of the U.S. by regulating mud puddles as “navigable waters.”

Most recently, Pruitt launched opponents into orbit by starting to make a rule to ensure that EPA science is transparent to the public — something I’ve advocated for more than 25 years.

So Scott Pruitt flew first class a few times and got a deal on a condo lease? Give me a break.

Steve Milloy, who publishes JunkScience.com, was on the Trump EPA transition team and is the author of Scare Pollution: Why and How to Fix the EPA.

If you can’t see this reader poll, please