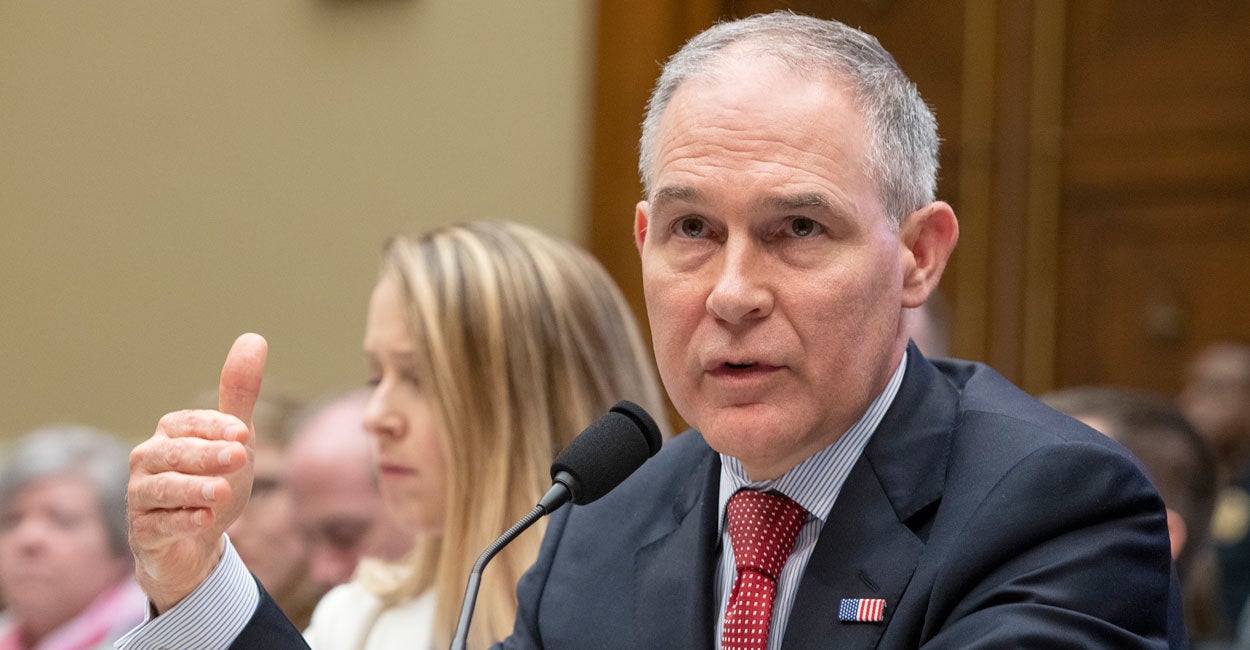 EPA Administrator Scott Pruitt offered up a vigorous defense of his record amid negative media coverage of his travel, security, and living expenses Thursday while appearing before two House subcommittees.

“Much of what has been targeted toward me and my team has been half-truths or at best stories so twisted they do not represent reality,” Pruitt said in opening remarks to the Energy and Commerce Committee’s energy subcommittee.

The chief of the Environmental Protection Agency, who also testified before an Appropriations Committee panel, said attacks on him and his staff are part of a larger agenda to derail President Donald Trump’s efforts to cut burdensome regulations on individuals and businesses.

“I simply will not let that happen,” he said.

Although both hearings had been scheduled to address the EPA’s budget, committee members spent the bulk of their time questioning Pruitt about allegations concerning his public expenditures and management decisions.

The document cites information showing that Pruitt’s international travel costs so far actually are lower than those of his predecessors in the Obama administration.

Allegations against Pruitt made by political opponents and some in the media have been looked into by the EPA’s inspector general, the House Oversight and Government Reform Committee, the Government Accountability Office, and the White House.

Interior Secretary Ryan Zinke also has come under criticism in the media, in large part for his use of chartered flights. But as The Daily Signal reported last week, Zinke’s chartered flight expenses are lower than those of two predecessors under the Obama administration.

In his opening statement before the Energy and Commerce subcommittee on environment, Pruitt, the former attorney general of Oklahoma, defended himself against the allegations while highlighting cost savings to taxpayers that have been produced through deregulation.

“I realize there have been very troubling media reports over the past few weeks,” Pruitt told committee members, adding:

I promise you that I more than anyone want to establish the hard facts and provide answers to questions surrounding these reports. Let me be very clear, I have nothing to hide as it relates to how I have run the agency for the past 16 months. I’m not afraid to admit that there has been a learning process. When Congress or independent bodies find fault in our decision-making, I want to correct that and ensure that it does not happen again. Ultimately, as administrator of the EPA, the responsibility for making necessary changes rests with me and no one else.

With that being said, facts are facts and fiction is fiction. And a lie doesn’t become truth just because it appears on the front page of a newspaper. Much of what has been targeted toward me and my team have been half-truths or at best stories so twisted they do not represent reality.

But committee Democrats who insisted on simple “yes or no” answers to their questions accused Pruitt of evading responsibility for the EPA’s deregulatory and other actions that they and other critics have questioned.

Rep. Frank Pallone, D-N.J., the ranking member on the full Energy and Commerce Committee, asked Pruitt whether he had taken any action against employees who disagreed with his views. Pallone also asked about the agency’s decision to delay a ban on a certain chemical.

“I think your actions are an embarrassment to President Trump and distract from the EPA’s ability to effectively carry out the president’s mission, and if I were the president I wouldn’t want your help,” Pallone said to Pruitt. “I’d get rid of you.”

Although Pallone demanded “yes or no” answers, Pruitt provided explanations and points of clarification.

Pruitt said he did not “ever recall” having any conversations about retaliatory measures against employees who differed on any policy. He said the agency continues to review its policy on the chemical in question, and that he had made no final decision.

Rep. Jerry McNerney, D-Calif., asked whether Pruitt had adopted a policy of “pay to play” where he would meet only with oil and gas interests while declining to meet with environmental and health groups. Pruitt replied that he had not exercised such preferential treatment.

Rep. Diana DeGette, D-Colo., asked about the purchase and installation, for $43,000, of a soundproof booth for his office, which the Government Accountability Office ruled was illegal.

Pruitt told lawmakers that he did ask for a secure phone line, but that he was not involved in decisions that led to higher costs.

The soundproof booth is discussed at length in the document released by the EPA. Career officials with purchasing power were responsible for the rising costs associated with the booth, according to the document. EPA officials who solicited bids initially estimated it would cost $13,500.

Some of the Republican lawmakers who questioned Pruitt attempted to bring the focus back to his policy decisions.

Rep. Bill Flores, R-Texas, credited Pruitt for working to make the EPA’s use of scientific data more open and transparent. Earlier this week, Pruitt signed off on a proposed rule to make public any underlying data from scientific studies that underpin regulatory decisions.

Rep. Joe Barton, R-Texas, said Pruitt is a “victim of Washington politics” who is being targeted by opponents of his reforms to the EPA.

In his opening remarks, Pruitt also highlighted deregulation initiatives that he said had generated significant cost savings for Americans:

There is consequential and important work being done at the EPA since the beginning of the Trump administration, both in terms of improved environmental outcomes as well as substantial regulatory reform.

We are stripping burdensome costs to the American economy at an unprecedented pace and we are doing this while inspiring confidence in the American people that government is going to work with them, as opposed to against them, to achieve harmony between jobs and growth and environmental stewardship. In a short time in the Trump administration, we have made enormous progress in terms of improved environmental outcomes.

Pruitt told committee members that the EPA has “removed over three times the number of polluted sites of contaminated communities across the country, as compared to the previous administration, for 2017.”

Trump’s goals for the EPA are not limited to the agency’s fulfilling its “core mission” with greater efficiency, but to achieve “comprehensive regulatory reform,” Pruitt said.

These actions are providing America’s job creators with the regulatory clarity they deserve. By repealing and replacing the so-called Clean Power Plan, we are ending one-size-fits-all regulation on energy providers and restoring rule of law. By rescinding and revising the Water of the United States (WOTUS) rule, we are ending Washington’s power grab over land use decisions across the country.

It is indisputable that we have made enormous progress in advancing president Trump’s agenda and pruning back decades of regulatory overreach that was unnecessary, burdensome, and ultimately harmful to hardworking Americans across the country.

Pruitt’s entire appearance before the energy subcommittee may be viewed here.

The EPA administrator testified Thursday afternoon before the House Appropriations Committee’s subcommittee on interior, environment, and related agencies. That hearing may be viewed here.

The Daily Signal depends on the support of readers like you. Donate now