“Donald Trump ought to fire him,” Gore said in an interview with CNN’s Van Jones on “The Van Jones Show,” airing Saturday. “It won’t do him any good for me to say that,” the former vice president quipped. “But if I told him to keep him on, maybe that would make him fire him.”
Pruitt has come under intense scrutiny as a result of being involved in multiple controversies. Recently, he’s faced questions about his housing arrangement in Washington, D.C., which involved his renting of a condo co-owned by a lobbyist whose husband works for a firm that has lobbied the EPA on energy issues. 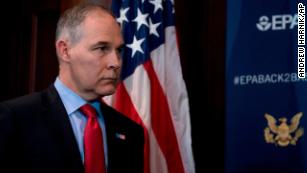 EPA chief Scott Pruitt’s long list of controversies
Gore, who won a Nobel Peace Prize in 2007 for his environmental activism, sees Pruitt’s scandals as proof of corruption.
“I will tell you that I would be very surprised if 90% of the American people looking at that situation did not think that there was the appearance of outright corruption there,” he said.
Stressing the importance of government integrity, Gore told Jones that “regardless of party, regardless of ideology or his policies, the American people have a right to believe there is some modicum of integrity in the way our government is operating.”
In their interview, Gore also told Jones that “Putin is a threat” to American democracy and that he “appears to be trying to reverse the outcome of the Cold War.” Also a threat, Gore said, is Fox News, Rush Limbaugh and Sinclair Broadcasting Group, which recently came under fire for forcing anchors to read a statement denouncing fake news.
“It had a totalitarian feel to it,” Gore said. “There was a specific deal made by Sinclair with someone in the White House giving them special access in return of them parroting the Trump line.”