We all recall the hysterical reactions from global warming alarmists whenever an Antarctic glacier calves and a huge chunk of ice cap breaks away in the summertime. The headlines would scream: Ice chunk as big as Manhattan breaks off! (due to global warming, they want us to believe).

Yet in the wintertime when such a mass (or even far more gets added suddenly), you only hear silence.

Our Japanese skeptic and friend Kirye at Twiiter informs us, citing data from the Danish Meteorological Institute (DMI), that Greenland added some 12 gigatonnes of snow and ice on February 24 alone. 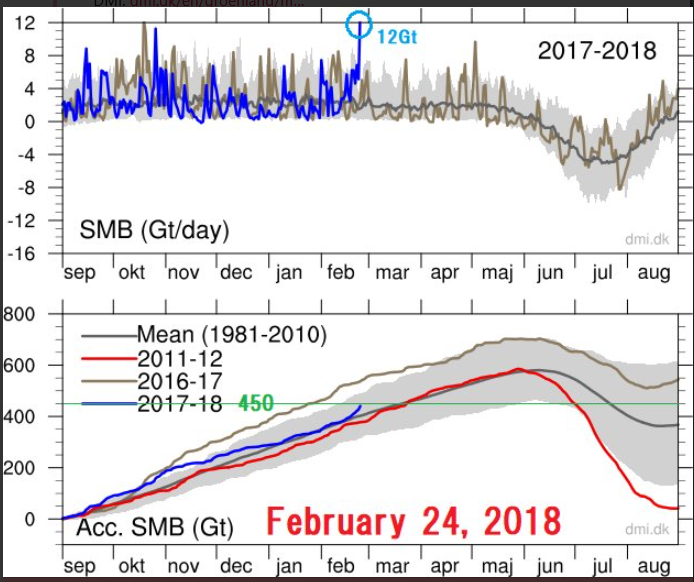 February in total so far has added some 100 gigatonnes, or enough to cover 2,285 Manhattans with half a meter of ice. Of course, we never hear about this in the media.

Although alarmists have been recently hyperventilating over balmy Arctic temperatures, what they ignore is that the cold Arctic air has been shifted down to the middle latitudes by weather patterns. Europe today is getting pounded by a “super freeze”:

Frigid temperatures in the -20°C range have been gripping large swaths of Europe.

In Germany meteorologist Dominik Jung tweets that the country’s highest peak, Zugspitze, broke a 117-year cold record this morning, posting a reading of -30.5°C. Much of Europe saw bitter cold temperatures below double-digit minus readings. The commercial meteorologist Jung comments on the Zugspitze record, citing data from the Germany DWD national weather service:

The online Munich-based Abendzeitung here reports that Germany today find itself in a “shock-frozen” and that a reading on the Zugspitze below -30°C is “really an extreme for the end of February”.

Currently Germany is having its “coldest February in years.”