Never mind the severe cold hitting the Super Bowl this year, or scientists lecturing us on global warming while their host resort Davos got buried in snow.

There’s been a lot of cold gripping all over the northern hemisphere this winter – much more than many of us expected. Europe has also joined in on the freeze-fest as the harsh winter spreads across the old continent and even into Africa: 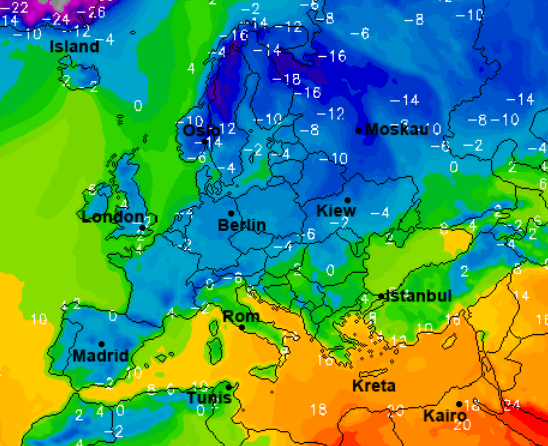 Cold is forecast to keep Europe shivering this week. Image cropped from wetter.online.de.

One reason for this could be due to the rapidly falling global surface temperatures  as recorded by satellite data. In January the global mean temperature anomaly dropped to +0.26°C, with the tropics (where most of the heat is found) posting a nippy -0.12°C anomaly, according to Dr. Roy Spencer.

Other cooling factors include the current La Nina and possibly the low solar activity playing a role. IceAgeNow here reported last July that solar activity was at its most rapid decline in 9300 years.

In Northern Europe cold winter are normal, but the recent forecast for the Finnish region of Lapland warned of temperatures down to -40°C. This Finnish website here writes:

Temperatures have been low all winter in Finnish Lapland, but the cold dip expected this week could see record-breaking extremes.”

Snow and cold are also forecast across UK as the Express here reports: “Britain set for FOOT of heavy snow NEXT WEEK in COLDEST freeze for decade.”

Spain, North Africa get frostbitten and snowed on

The wintry conditions will likely impact agriculture and the European food markets. Fruitnet.com here writes: ” The cold snap gripping much of the Spanish peninsula is likely to reduce the availability of vegetables and salads on the European market during the coming weeks.”