Cooling, Not Warming, Leads To 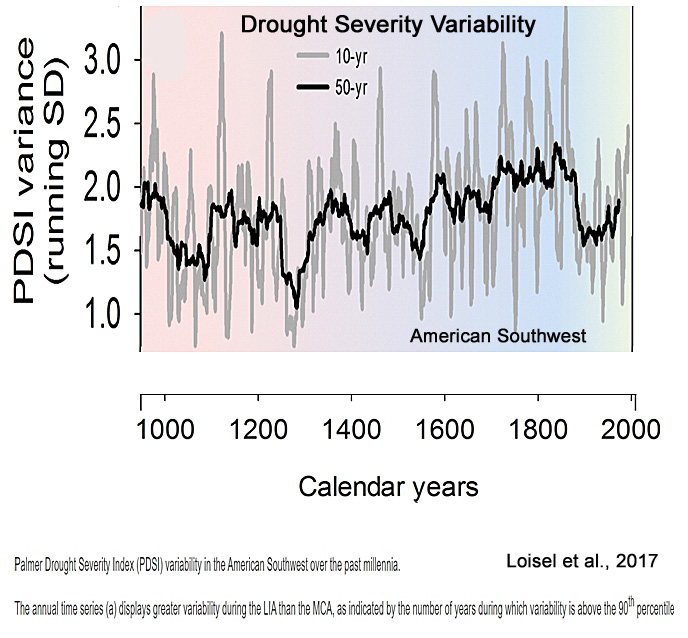 Numerical experiments using a fully coupled atmosphere-ocean general circulation model with freshwater hosing in the northern North Atlantic showed that climate becomes most unstable in intermediate glacial conditions associated with large changes in sea ice and the Atlantic Meridional Overturning Circulation. Model sensitivity experiments suggest that the prerequisite for the most frequent climate instability with bipolar seesaw pattern during the late Pleistocene era is associated with reduced atmospheric CO2 concentration via global cooling and sea ice formation in the North Atlantic, in addition to extended Northern Hemisphere ice sheets.

The hurricane analysis conducted by Burn and Palmer (2015) determined that hurricane activity was subdued during the [warm] Medieval Climate Anomaly (MCA) (~900-1350 CE) and became more produced during the [cold] Little Ice Age (LIA) (~1450-1850 CE), followed by a period of variability occurred between ~1850 and ~1900 before entering another subdued state during the industrial period (~1950-2000 CE). In general, the results of this study corroborate these findings … [W]hile hurricane activity was greater during the LIA, it also had more frequent periods of drought compared to the MCA (Burn and Palmer 2014), suggesting that climate fluctuations were more pronounced in the LIA compared to the MCA. The changes in the diatom distribution and fluctuations in chl-a recorded in this study starting around 1350 also indicate that variations in climate have become more distinct during the LIA and from ~1850-1900.

[C]limate variability has increased following the onset of the Little Ice Age (~1450-1850 CE), however it is difficult to distinguish the impacts of recent anthropogenic climate warming on hurricane activity from those of natural Atlantic climate regimes, such as ENSO.

Results indicate that the midlatitude summer cyclone activity over East Asia exhibits decadal changes in the period of 1979–2013 and is significantly weakened after early 1990s. …  Moreover, there is a close linkage between the weakening of cyclonic activity after the early 1990s and the nonuniform surface warming of the Eurasian continent. Significant warming to the west of Mongolia tends to weaken the north–south temperature gradient and the atmospheric baroclinicity to its south and eventually can lead to weakening of the midlatitude cyclone activity over East Asia.

5. More Hydroclimatic Variability During Cold Periods…Models Say Warming Causes More Instability, So The 21st Century Will Be Like The Little Ice Age, With More Instability/Megadrought

Our tree ring-based analysis of past drought indicates that the Little Ice Age (LIA) experienced high interannual hydroclimatic variability, similar to projections for the 21st century. This is contrary to the Medieval Climate Anomaly (MCA), which had reduced variability and therefore may be misleading as an analog for 21st century warming, notwithstanding its warm (and arid) conditions. Given past non-stationarity, and particularly erratic LIA, a ‘warm LIA’ climate scenario for the coming century that combines high precipitation variability (similar to LIA conditions) with warm and dry conditions (similar to MCA conditions) represents a plausible situation that is supported by recent climate simulations. … Our comparison of tree ring-based drought analysis and records from the tropical Pacific Ocean suggests that changing variability in El Niño Southern Oscillation (ENSO) explains much of the contrasting variances between the MCA and LIA conditions across the American Southwest. The Medieval Climate Anomaly (MCA, ~950–1400 CE) is often used as an analog for 21stcentury hydroclimate because it represents a warm (and arid) period. The MCA appears related to general surface warming in the Northern Hemisphere, prolonged La Niña conditions, and a persistent positive North Atlantic Oscillation mode. It has been referred to as a stable time interval with ‘quiet’ conditions in regards to low perturbation by external radiative forcing. In this study, we demonstrate that the Little Ice Age (LIA, ~1400–1850 CE) might be more representative of future hydroclimatic variability than the conditions during the MCA megadroughts for the American Southwest, and thus provide a useful scenario for development of future water-resource management and drought and flood hazard mitigation strategies. 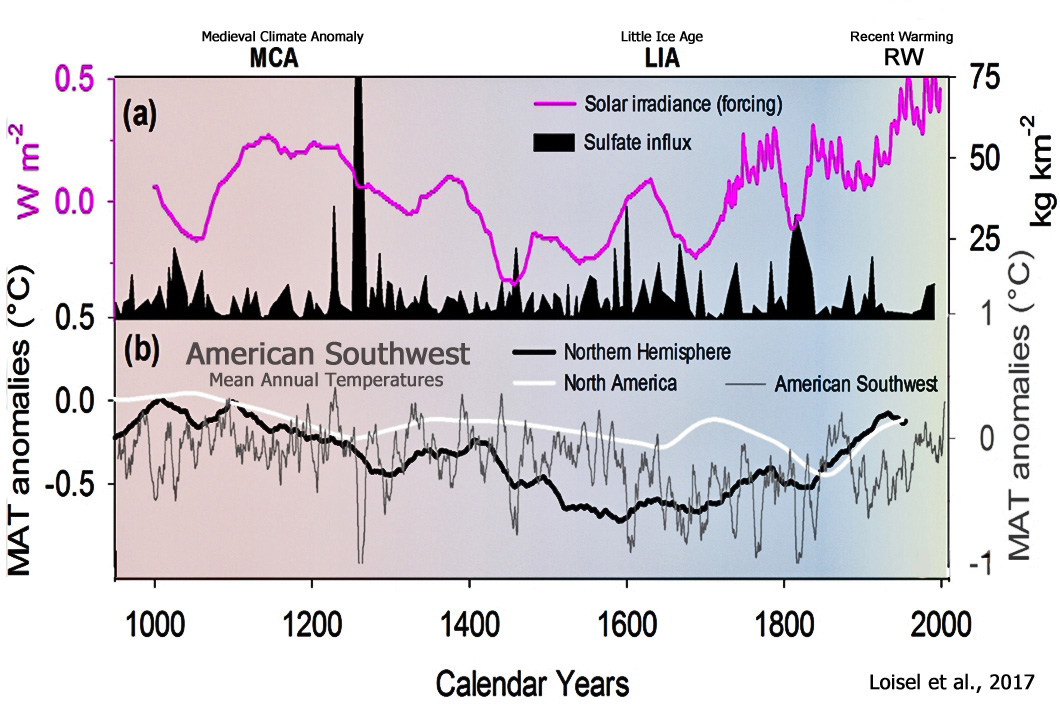