How an American Family Escaped From Amazon Pirates

By Paulo Trevisani and
Paul Kiernan

PORTO DOS DIAS, Brazil—In October 2012, Adam and Emily Harteau, a California couple in their early 30s, set out on an overland journey to the southernmost tip of South America in their Volkswagen Westfalia camper van. With colorful travel photos, $16,301 raised on Kickstarter, and the hashtag #vanlife, they drew an army of social-media followers intrigued by their seemingly blissful existence.

“As we grow older, time is punctuated by appointments and alarm clocks, and we forget how to live at our own pace,” Ms. Harteau wrote in a photo essay published in the New York Times’ travel section in August, nearly five years into what was initially planned as a yearlong trip. “We wanted to slow down time again by raising a family on the road and use their questions about nature and life as our curriculum. We are world-schooling our kids.” 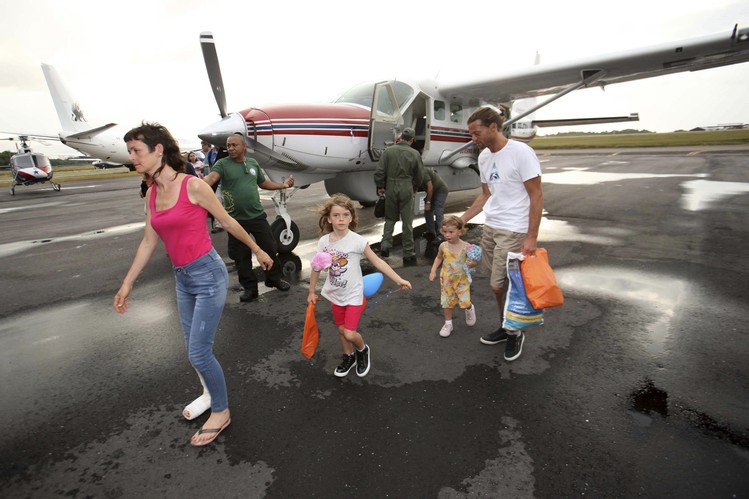 Adam Harteau, right, Emily Harteau, left, and their two daughters arriving at the international airport in Belém in Brazil’s Para state on Nov. 2. The California family had been missing for days after pirates attacked their boat in the Amazon River delta area. PHOTO: MARCELO LELIS/ASSOCIATED PRESS

The Harteaus’ adventure came to a harrowing end on Nov. 1, when a ferry captain plucked the couple and their two daughters, 6-year-old Colette and 3-year-old Sierra, from a river in Pará state in the Brazilian Amazon. They had spent the previous three days hiding in the jungle after pirates in a wooden canoe ambushed the barge carrying them upriver on their return journey to California.

“They were very, very scared, hungry and covered by insect bites,” said Dinei dos Santos, the boat’s manager, who spotted them signaling for help.