Weather and climate analyst Schneefan here writes that the 2017/18 winter in Europe could be one of the coldest of the last 20 years.

Meteociel/CFS prognosis dated 1 September 2017 for the temperature deviation from the long-term mean at 850 hPa (approx. 1500 m) in Europe for the 2017/18 winter. Source: http://www.meteociel.fr/modeles/cfsme_cartes.php

Schneefan writes one has to go back to the 1990s to find a negative 2.0°C deviation from the 1961-1990 mean that is projected for Germany. That deviation translates to almost 3°C when compared to the 1981-2010 mean. That would would be awfully cold.

The following chart shows the winter temperature anomalies for Germany for each year since 1901: 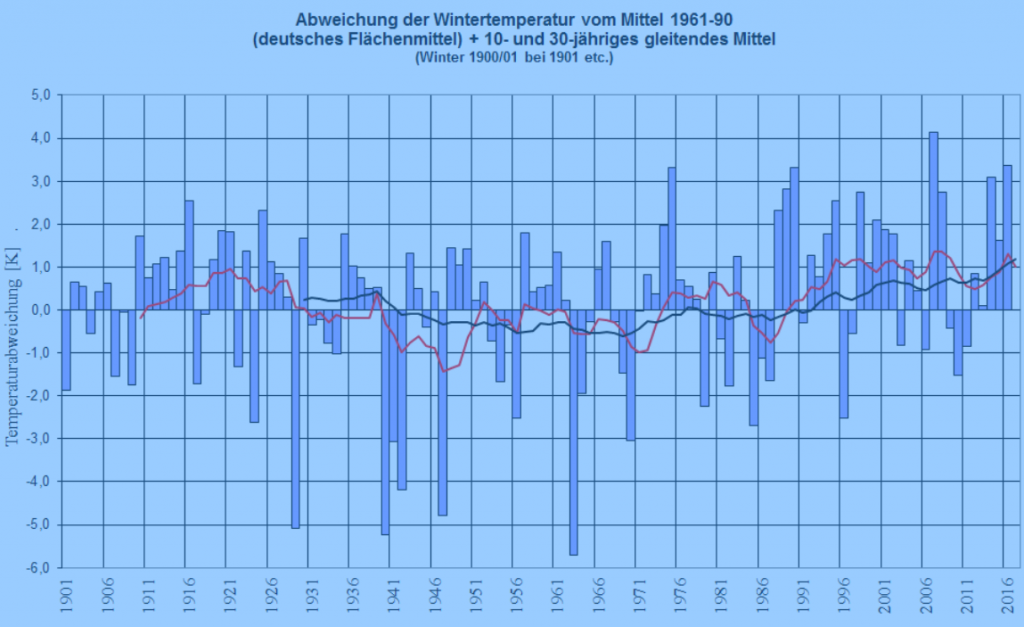 The latest CSFv2 model run confirms the earlier cold projections that have been calculated since mid June, 2017.

Projections for this fall (September, October, November) are also on the cool side. An analysis from 17 September shows that Central Europe will see temperatures that are about 1°C below the 1981-2010 mean. So far the first three weeks have been right on the money.

Schneefan warns that it’s still too early to rely on the latest trend and to bank on it, but adds: “If these cold projections for the 2017/18 winter keep appearing in the next model runs this fall, then the probability increases.”

Also Schneefan writes that we should not expect any general warming trend soon after the coming winter, due to the lowest solar activity is 200 years, the cooling La Niña that is beginning to take hold, and the already falling temperatures taking place in the wake of the 2015/15 El-Niño.

There are other signs that change is possibly in the works:

After the ice mass growth in Greenland for the first time in the current century and a new record cold July temperature (-33°C) set in Greenland, no one should be surprised that the 2017/18 winter will be the coldest in Europe and other parts of the northern hemisphere this century.

And to potentially make matters worse, the Bali volcano Agung is now at warning level “orange”. The last eruption was in 1963 with a VEI of 5!. So rapidly could global climate unexpectedly and naturally change.

Readers need to note that the projections involve considerable uncertainty, and the winter of course may develop completely differently. Yet, many meteorologists had projected earlier this year a severe hurricane season this year based on oceanic patterns, and that has come true.