Gore challenged by Mayor at CNN townhall: ‘If sea level rise is occurring, why am I not seeing signs of it?’ 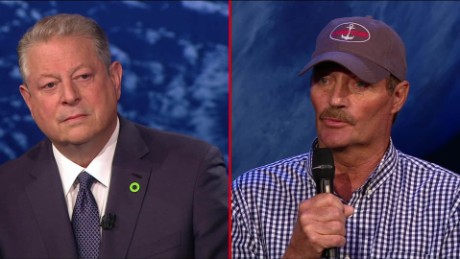 TANGIER, Va. (AP) — An enthusiastic supporter of the president who is mayor of a Virginiaisland that’s sinking into the Chesapeake Bay got a chance to challenge former Vice President Al Gore on climate change during a town hall Tuesday night.

“I’m not a scientist, but I’m a keen observer. If sea level rise is occurring, why am I not seeing signs of it?” Eskridge asked during the town hall that aired on CNN. Participants had screened Gore’s new documentary, “An Inconvenient Sequel: Truth to Power.”

The former vice president said he was sorry for what the island’s residents are going through and reiterated scientific findings, saying scientists forecast another 2 feet of sea level rise.

“One of the challenges of this issue is taking what the scientists say and translating it into terms that are believable to people where they can see the consequences in their own lives,” Gore said.

Scientists say Tangier Island is eroding into the bay while sea levels are rising against its shores. Studies predict its dwindling population of 460 people may have to abandon Tangier in 25 to 50 years — if not sooner.

But Eskridge, 58, a lifelong waterman who harvests crabs from the bay, was among the 87 percent of voters in this deeply spiritual community who supported Trump.

When CNN aired a segment on Tangier’s plight in June, Eskridge told meteorologist Jennifer Gray: “I love Trump as much as any family member I got.”

Eskridge and others believe that erosion, not sea-level rise, is the real threat because they can see it. And they believe infrastructure, such as a sea wall around the island, can save it.

“The erosion that’s taking place you can almost see every week, every month for sure,” he told The Associated Press in May.