Analsyis: NYT claims hot summers of today ‘virtually unheard of in the 1950s’ but claim ‘is exact opposite of reality’ 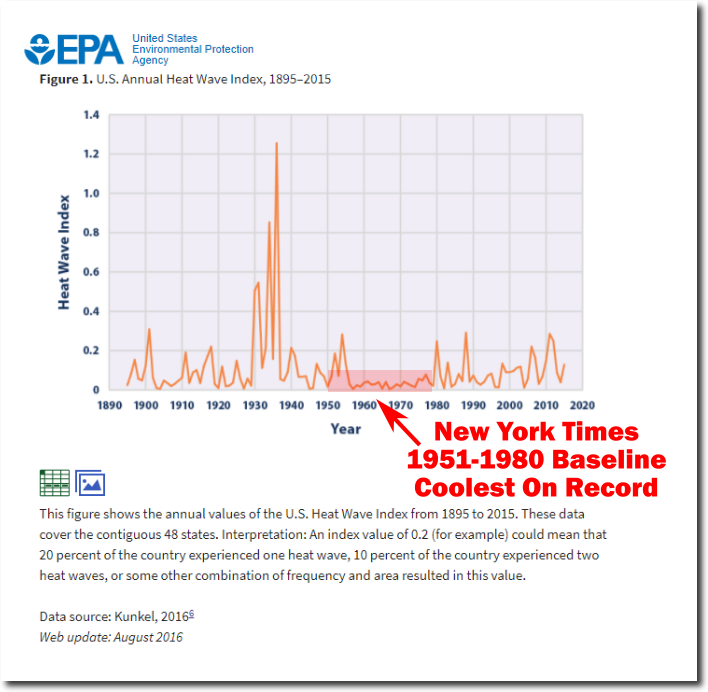 The New York Times said yesterday that heatwaves in the past were “virtually unheard of in the 1950s”, temperatures approaching 130 degrees didn’t used to occur, and summer temperatures have shifted towards more extreme heat. 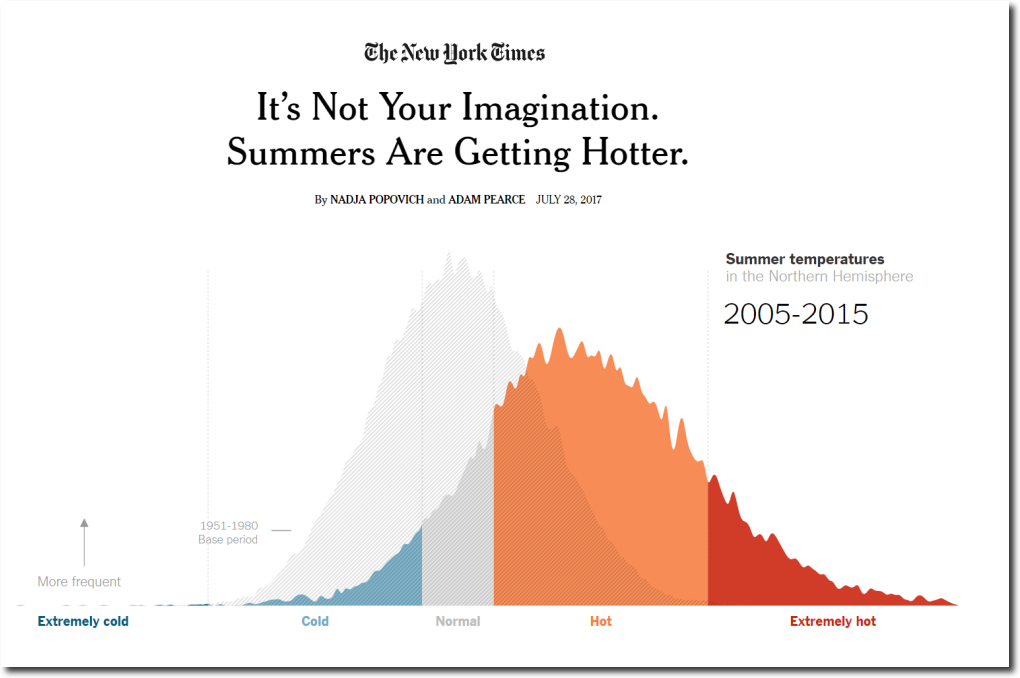 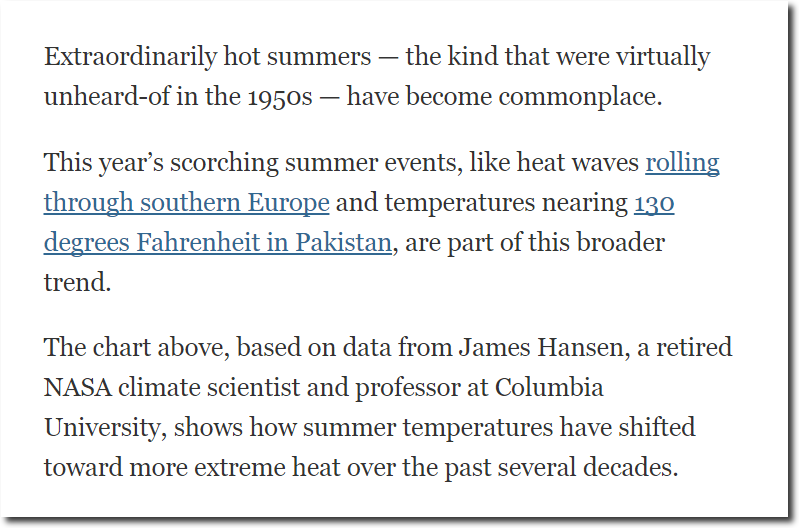 It’s Not Your Imagination. Summers Are Getting Hotter. – The New York Times

Every single claim in the article is patently false, and the exact opposite of reality. The authors intentionally started their study in a cold period, after the extreme heat of the 1930’s. 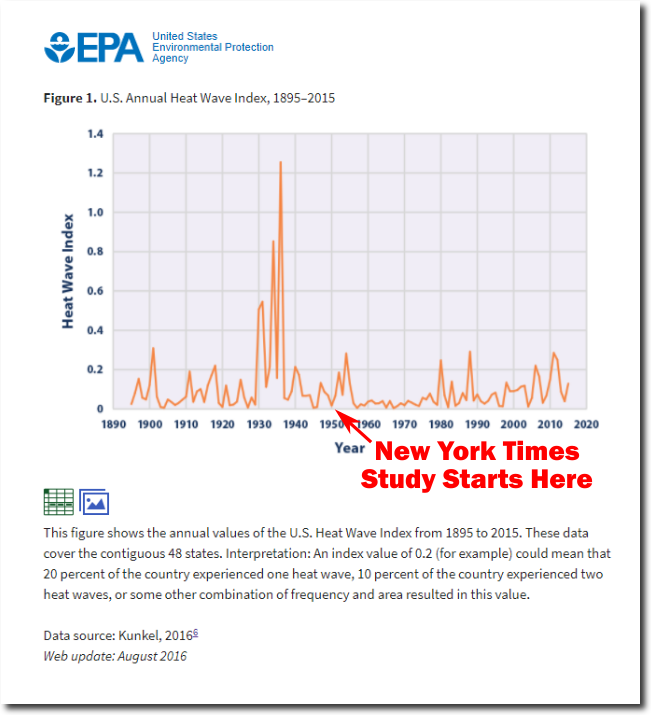 Then they chose a baseline which included the coolest period on record, and declared the record cool to be normal.

The EPA graph above is helpful, but isn’t very accurate. Summers were much hotter during the 1950’s, and heatwaves have been plummeting in frequency, intensity and duration over the past century.. 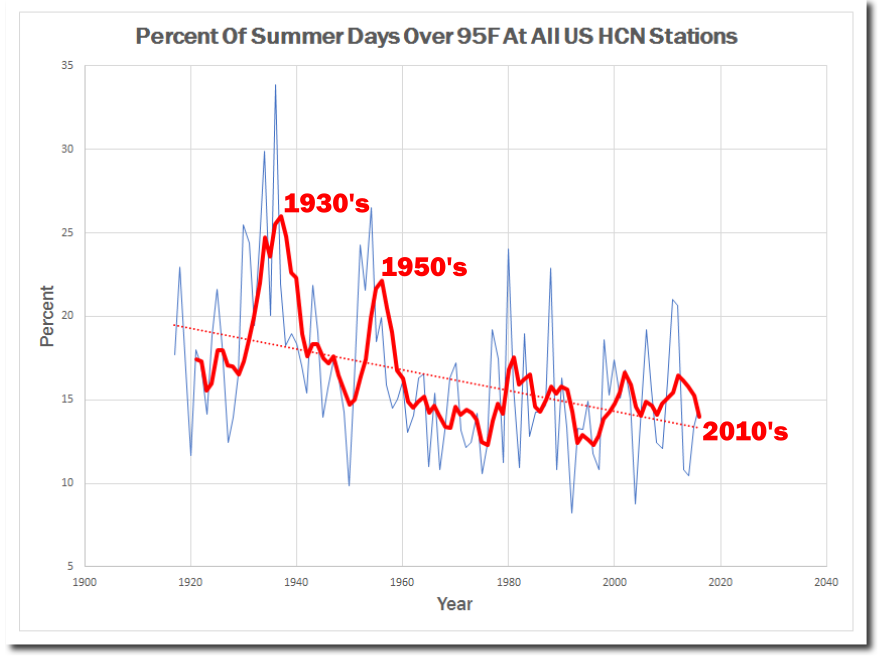 If New York Times writers actually read the New York Times, they would have known that temperatures approaching 130 degrees occurred in Australia in 1896, including several days of 129 degrees in “proper shade” 500 miles west of Sydney. 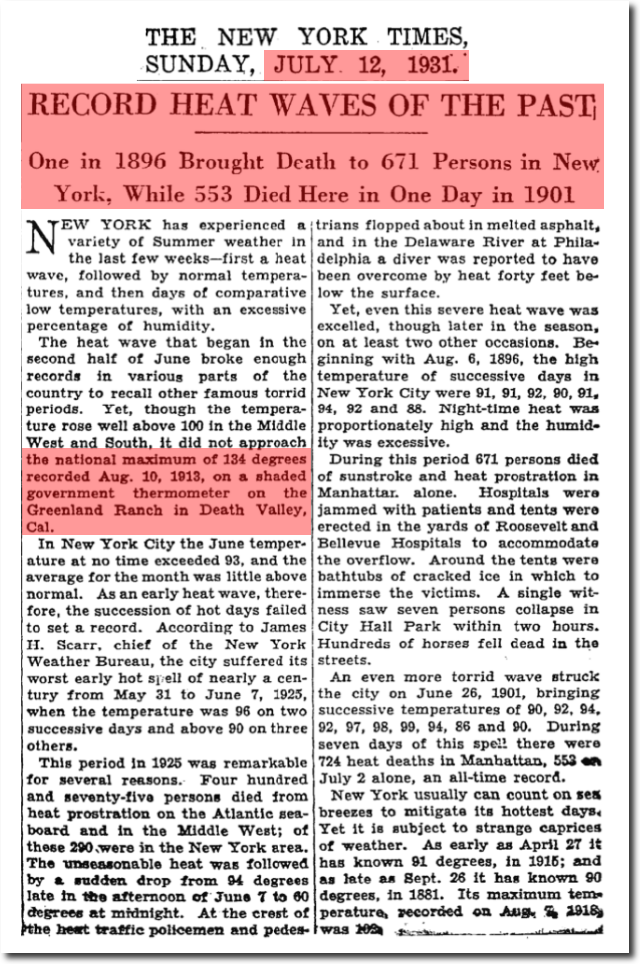 The New York Times headlines from the 1901 heatwave were quite remarkable.

Later in July 1901, the heatwave expanded to Europe

THE HEAT WAVE IN EUROPE.; Numerous Deaths in London — Effects of Drought Serious — No Signs of a Change in England.

And continued into August.

UNPRECEDENTED HEAT IN ITALY.; Vineyards Shriveled Up — People Forced to Sleep in the Open Air.

Empirical evidence does not lend much support to the notion that climate is headed precipitately toward more extreme heat and drought. The drought of 1999 covered a smaller area than the 1988 drought, when the Mississippi almost dried up. And 1988 was a temporary inconvenience as compared with repeated droughts during the 1930s “Dust Bowl” that caused an exodus from the prairies, as chronicled in Steinbeck’s Grapes of Wrath.

in the U.S. there has been little temperature change in the past 50 years, the time of rapidly increasing greenhouse gases — in fact, there was a slight cooling throughout much of the country Hansen’s transition to the dark side of climate fraud accelerated after 1999, when he started cooling the past and warming the present.

Since Hansen retired, Gavin Schmidt has taken over as chief fraudster at NASA – further cooling the past and warming the present.

Hansen also predicted that Lower Manhattan would drown between 2008 and 2018, and still believes it.

“The West Side Highway [which runs along the Hudson River] will be under water. And there will be tape across the windows across the street because of high winds. And the same birds won’t be there. The trees in the median strip will change.” Then he said, “There will be more police cars.” Why? “Well, you know what happens to crime when the heat goes up.”

When did he say this will happen?

Does he still believe these things?

Yes, he still believes everything. I talked to him a few months ago and he said he wouldn’t change anything that he said then.

It is unfortunate that current New York Times authors don’t do any research, don’t read their own paper, and simply parrot lies and idiocy from the same government funded frauds – over and over again.