Analysis: ‘Evidence Review Suggests Humans May Not Be The Primary Drivers Of CO2 Concentration Changes’

This lack of compatibility between year-to-year human emissions rate changes and year-to-year atmospheric CO2 ppm changes has existed for quite some time.  Dr. Jamal Munshi describes it as a “necessary condition” for there to be a close correlation between annual fluctuations in human emissions and atmospheric CO2 concentrations.   And yet when he statistically analyzed the Mauna Loa record (1959-present) of CO2 concentration changes, he concluded that they did not correlate with the variance in annual anthropogenic emissions. 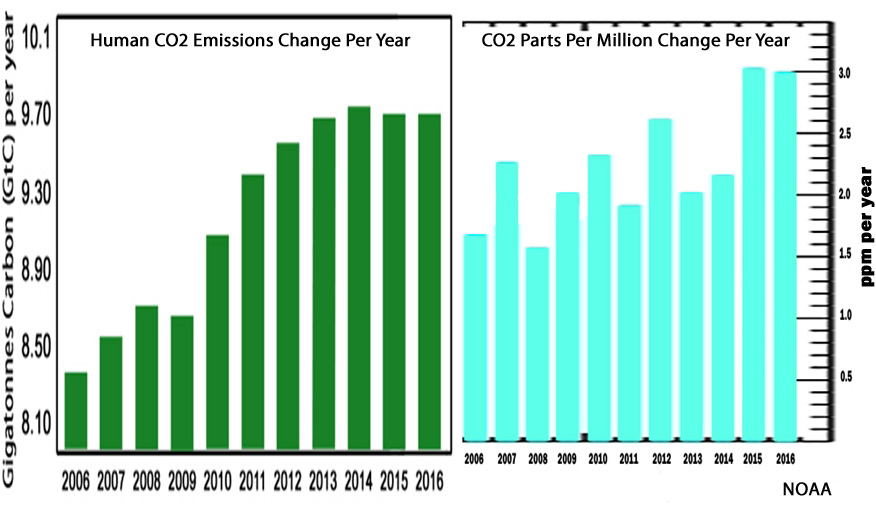 A Strong Lead-Lag Correlation Between Temperature And CO2 Changes

It has long been recognized by atmospheric scientists that temperature changes are drivers of CO2 concentration variability.  This is especially due to the physical observation that oceans – which have 50 times more dissolved CO2 than the atmosphere does – release more of their vast stores of CO2 during warm years, and they retain more CO2 during anonymously cool years.   For example, Flohn (1982) observed that the oceans contribute almost twice as much to the CO2 concentration change during warm-water years (El Niño) as they do in cool-water years (La Niña), and that the variance in atmospheric CO2 growth is “independent from” anthropogenic CO2 emissions.

“The recent increase of the CO2-content of air varies distinctly from year to year, rather independent from the irregular annual increase of global CO2-production from fossil fuel and cement, which has since 1973 decreased from about 4.5 percent to 2.25 percent per year (Rotty 1981).”

“Comparative investigations (Keeling and Bacastow 1977, Newll et al. 1978, Angell 1981) found a positive correlation between the rate of increase of atmospheric CO2 and the fluctuations of sea surface temperature (SST) in the equatorial Pacific, which are caused by rather abrupt changes between upwelling cool water and downwelling warm water (“El Niño”) in the eastern equatorial Pacific.  Indeed the cool upwelling water is not only rich in (anorganic) CO2 but also in nutrients and organisms. (algae) which consume much atmospheric CO2 in organic form, thus reducing the increase in atmospehreic CO2. Conversely the warm water of tropical oceans, with SST near 27°C, is barren, thus leading to a reduction of CO2 uptake by the ocean and greater increase of the CO2. … A crude estimate of these differences is demonstrated by the fact that during the period 1958-1974, the average CO2-increase within five selective years with prevailing cool water only 0.57 ppm/a [per year], while during five years with prevailing warm water it was 1.11 ppm/a.  Thus in a a warm water year, more than one Gt (1015 g) carbon is additionally injected into the atmosphere, in comparison to a cold water year.”

In the undergraduate-level textbook Physics of the Atmosphere and Climate, Dr. Murry Salby affirms the observation that temperature changes are a significant determinant of atmospheric CO2 changes.

“Warming of SST (by any mechanism) will increase the outgassing of CO2 while reducing its absorption. Owing to the magnitude of transfers with the ocean, even a minor increase of SST can lead to increased emission of CO2 that rivals other sources.” pg. 546

“The results for the two periods are in broad agreement. Together with the strong dependence of CO2 emission on temperature, they imply that a significant portion of the observed increase in r˙CO2 derives from a gradual increase in surface temperature.”  pg. 253

“Surface temperature depends on the atmosphere’s optical depth. The latter, in turn, depends on atmospheric composition through radiatively active species. Water vapor is produced at ocean surfaces through evaporation. Carbon dioxide is produced by decomposition of of organic matter. These and other processes that control radiatively active species are temperature dependent.” pg 249, 250