With barely a month as Secretary of State, Rex Tillerson is coming under fire for not having met with the UN climate chief Patricia Espinosa. Espinosa sent a request to Tillerson for a face-to-face meeting but the newly minted secretary has been traversing the globe and meeting with other diplomats. That’s not sitting well with worried environmentalists and the impecunious #United Nations.

Espinosa made her comments after a meeting this week in Chicago where she discussed making businesses less carbon intensive. She told reporters she’s not surprised given it was the beginnings of a new administration. She also recognized the importance of having the U.S. as a partner. Before leaving office, President Obama sent the U.N. climate green fund $1 billion.

Where in the world is Secretary of State Rex Tillerson? http://wapo.st/2matLkC

Perspective | Where in the world is Secretary of State Rex Tillerson?

A lot of foreign policy is invisible. Unfortunately, I’m not sure that explains the rarely seen secretary of state.

‘Seat at the table’

Tillerson has been a proponent of a carbon tax and said at his confirmation hearings the United States should have a “seat at the table” when asked about the Paris Climate Accord. Espinosa admitted the U.S. was an important ally and she looked forward to meeting with the administration once everything has settled down.

She also fretted the U.S. could voluntarily withdraw from the Paris agreement, which calls for keeping warming from rising over 1.5°C by reducing CO2 emissions. Espinosa said she was worried the U.S. would change its position on the accord, which is why she was looking forward to working with Tillerson. Given previous comments by Trump, she has good reason. 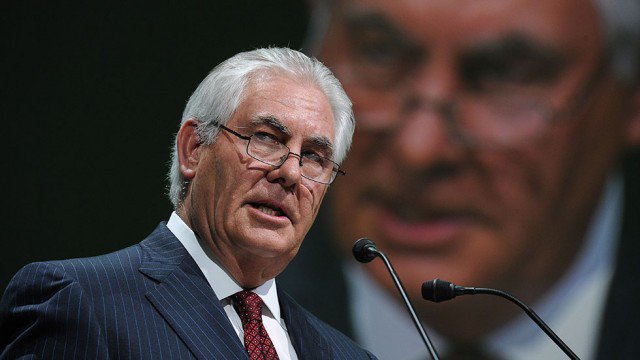 Does Rex Tillerson have the worst job in Washington? http://hill.cm/uWr4LR6

And if President Trump did ignore the non-binding agreement there’s really not much the U.N. can do; Espinosa believes there are enough companies on the road to reducing carbon dioxide (CO2) emissions so it won’t matter. She noted a number of cities, largely in California, have set aggressive agendas for meeting “sustainability” goals.