Japanese climate blogger Kirye caught my eye here at Twitter when posting a comparator chart of Arctic sea ice extent (and thickness) for 2007, 2015 and this year (2016) for September 4. In a nutshell, what is all the alarm about?

She comments that “Arctic ice is not doomed in the real world.” Clearly Arctic sea ice this summer will most likely not set a new record. There’s far more ice up there then what global warming alarmists hysterically projected earlier.

Also a recent chart of Arctic sea ice extent by the National Snow Ice and Data Center (NSIDC) shows that current sea ice extent is some half a million square kilometers over the 2012 level: 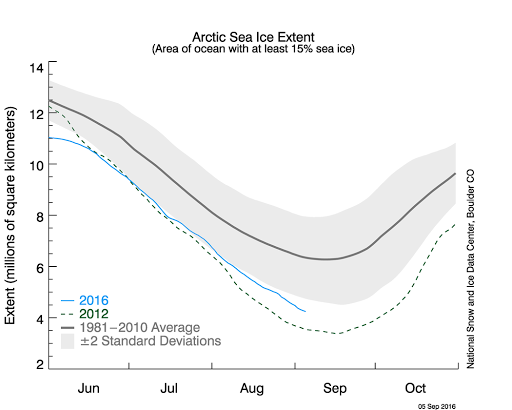 Clearly over the past years Arctic sea ice has refused to have anything to do with the often claimed “death spiral” and alarmists are always forced to go back a number of years in order to get the sharp downward overall trend they want to see.

Lately, however, it has not been downward at all.

No downward trend over past decade No melt in 10 years! Chart: Woodfortrees

Clearly the Arctic is nowhere near a death spiral, and the polar ice has in fact defied the models and the many earlier predictions that it would disappear by 2015 altogether. With all that ice still up there, it’s time for the sea ice and global warming modelers to discard their equations – and to start over again from scratch.

With millions of square kilometers of ice still up there reflecting summer radiation back into space, it’s time readjust the energy budget.