Bill McKibben on ‘climate crime’: Exxon murdered coral reefs by ‘firing the (global warming) gun’ – ‘We’re not going to let them get away with murder’ 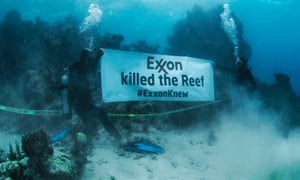 McKibben: 'The coral die-off crisis is a climate crime and Exxon fired the gun' - 'This week we’re staging protests on the ‘crime scene’ of the world’s affected reefs to send a signal that we’re not going to let fossil fuel firms get away with murder'

'When a body falls on the street, the police come to investigate. Did this person die of natural causes, or was there foul play involved? When a reef dies, we ask the scientists. And this year they’ve told us the answer in no uncertain terms. The amazingly rapid die-off of a huge percentage of the world’s coral reefs is not a sad but normal tragedy; it’s a crime. Perhaps the fastest, most widespread crime of the global warming era.' The reefs can’t be made whole again: if they recover at all it will be slowly, and in the face of ongoing warming that seems unlikely. But at the very least, the nations that sustained this damage should be compensated. Exxon and its brethren made record profits in the last decades of denial and deceit; that money should rightfully go to pay for the damage it caused, and to build the energy systems that can power our lives without destruction.

We need to remember that there’s nothing natural about this horror. It was caused, as so many crimes are, by greed. And that greed is ongoing – Exxon continues to search for more hydrocarbons, and to reject even modest changes to its policies.

Natural climate change drove coral reefs to ‘total ecosystem collapse’ when CO2 was ‘safe’ – ‘According to a paper published in Science, natural climate change 4,000 years ago drove coral reefs to ‘total ecosystem collapse lasting 2,500 years’ for ‘40% of their total history’ over past 6,000 years. The authors believe ‘an intensified ENSO regime’ was responsible, but then erroneously assume AGW will lead to a similar reef collapse, despite extensive peer-reviewed literature showing that changes in greenhouse gases have not and will not affect ENSO intensity’

UN IPCC’s Richard Tol rips study: ‘Modern coral species, of course, are 250 million years old and have made it through quite some climate change’

Claim: CO2 Pollution Could Erase Coral Reefs — Reality Check: ‘Corals evolved during the Cambrian Era, when CO2 levels were 8 to 20 times higher than today’ – ‘The great coral reefs of the Permian era formed when CO2 was as high as 3,000 ppm CO2. Obviously corals like high levels of CO2’

The Findings of 3 New Peer-Reviewed Studies: Coral Reef Damage From CO2-Warming Was Overblown Hype
The coral reef may be growing: ‘Maldives coral islands, they postulate, may be growing with the rising waters’

The Fishy ‘Science’ of Ocean Acidification

NOAAgate: how ‘ocean acidification’ could turn out to be the biggest con since Michael Mann’s Hockey Stick – Concealed Data reveals: ‘There has been NO reduction in oceanic pH levels in the last century.’

Acidification-gate?: NOAA accused of ‘pHraud’ by hiding data showing oceans have not ‘acidified’ over past century

UN IPCC’s Activist ‘Science’ Revealed: Greenpeace cited as ‘sole source’ for ‘coral reef degradation’ claims: ‘Greenpeace seems to have had a significant hand in the IPCC’

Study: ‘Rising ocean temps caused by climate change are unlikely to mean the end of coral on the Great Barrier Reef’ – ‘In results they have described as ‘surprising’ the study found while one species declined in abundance, other species could rise in number. ‘The good news is that, rather than experiencing wholesale destruction, many coral reefs will survive climate change by changing the mix of coral species as the ocean warms and becomes more acidic’