Obama in 2015: Malia’s asthma attack made climate change personal - President Obama says climate change first became a personal issue for him when his 16-year-old daughter was rushed to the hospital 12 years ago after suffering from an asthma attack. “What I can relate to is the fear a parent has, when your 4-year-old daughter comes up to you and says, ‘Daddy, I’m having trouble breathing.’ The fright you feel is terrible,” the president told ABC News in an interview broadcast Wednesday. “

RadarOnline.com reports that Malia Obama has been caught on camera smoking pot at a concert. 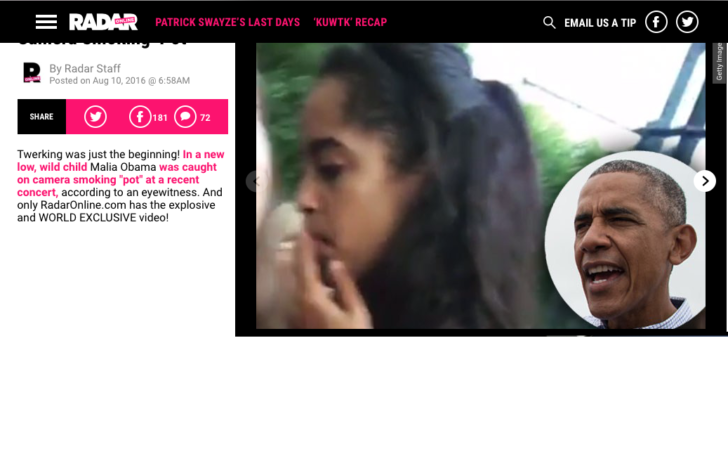 You can watch a video here.

Obama in 2015: Malia’s asthma attack made climate change personal – President Obama says climate change first became a personal issue for him when his 16-year-old daughter was rushed to the hospital 12 years ago after suffering from an asthma attack. “What I can relate to is the fear a parent has, when your 4-year-old daughter comes up to you and says, ‘Daddy, I’m having trouble breathing.’ The fright you feel is terrible,” the president told ABC News in an interview broadcast Wednesday. “And if we can make sure that our responses to the environment are reducing those incidents, that’s something that I think every parent would wish for,” Mr. Obama said. “And the good news is there are concrete steps we can take to do something about it.” The White House announced this week a series of initiatives to deal with the impact of climate change on public health, including the upcoming White House Climate Change and Health Summit, ABC News reported.

JunkScience.com readers will recall Obama’s claim that Malia was asthmatic and that his global warming rules would prevent child asthma. All this was debunked below.

As part of a public relations campaign launched in April to support EPA’s global warming rules, President Obama told the nation a whopper. He said on ABC’s Good Morning America that his push to address global warming was influenced by an asthma attack his daughter Malia experienced when she was four years old.

Skeptical, I investigated to see if there was anything to the story and, indeed, I found that Malia’s asthma attack was not the first time the Obamas exploited her experience to advance their political agenda.

In a 2012 interview given to promote an article she authored for a radical environmental group, Michelle Obama revealed that Malia’s asthma attack occurred at a circus. Then in a 2013 interview to promote a bill concerning asthma grants to states, President Obama revealed, “Malia actually has a peanut allergy.”

As peanuts are known to abound at circuses, it’s virtually certain that Malia’s asthma attack had everything to do with peanuts and nothing to do with global warming or outdoor air quality.

Yet to the unsuspecting or to the unscrupulous, President Obama’s asthma fairy tale dovetails nicely with claims that are key to EPA’s proposed regulations concerning global warming and ground-level ozone.

EPA claims its proposed global warming rules will prevent 150,000 asthma attacks in children every year by reducing power plant emissions that contribute to ozone levels. In a separate proposal to tighten standards for ozone in outdoor air, the EPA claims its rules will prevent up to 960,000 asthma attacks in children annually.

Like the President’s bid to blame Malia’s asthma attack on power plant emissions, the EPA’s claim that ozone triggers asthma in kids runs afoul of reality, and EPA knows it.

First, EPA discloses deep in documents that few people have ever read that its asthma estimates rely largely on a single study titled “Acute respiratory health effects of air pollution on children with asthma in US inner cities,” published in 2008 in the Journal of Allergy and Clinical Immunology.

Contrary to EPA’s claims, however, the study fails to correlate outdoor ozone levels with asthma symptoms in the inner-city asthmatic kids. Whether the EPA-funded researchers looked at ozone alone or in combination with other substances in the air, it could find no statistically significant correlation between ozone and asthma symptoms or breathing reductions in children pre-disposed to breathing problems. The researchers clearly admit these negative findings in the study.

The most damning evidence against EPA’s ozone-asthma claims, however, are the results of EPA’s own clinical experiments on human beings.

Since the 1990s, EPA has exposed thousands of human volunteers to very high levels of ozone under varying conditions. The human guinea pigs are placed in an air-tight chamber into which EPA researchers pump processed air containing ozone levels that can be five times higher than EPA allows in outdoor air.

These experiments can last as long as six hours, during which time the human guinea pigs may be made to exercise for 50 minutes of each hour. People experimented on have included teenagers, young adults, the elderly, asthmatics, people with metabolic syndrome and combinations of the afore-mentioned.

The reason EPA conducts these experiments is because, as it has admitted in litigation over them, “these studies help determine whether the mathematical associations between ambient (outdoor) levels of air pollutants and health effects seen in large-scale epidemiological studies are biologically plausible or not.”

So what have been the results? In a 2010 document obtained via the Freedom of Information Act, EPA told a University of North Carolina review board (where much of this research has occurred) that, “more than 6,000 volunteers have been studied without a single serious adverse event being observed.” And no asthma attacks or adverse events have been reported in EPA-conducted human experiments since 2010, either.

So neither EPA’s self-proclaimed key epidemiologic study nor its human experiments back up the ozone-asthma link. To claim otherwise is simply lying. Sadly, President Obama and his EPA are surfing these lies to victory on two regulations that will be the most expensive and biggest job-killing EPA rules ever.