The Good News on Global Warming: We’ve Delayed the Next Ice Age

Next deep freeze may be 100,000 years away, scientists say 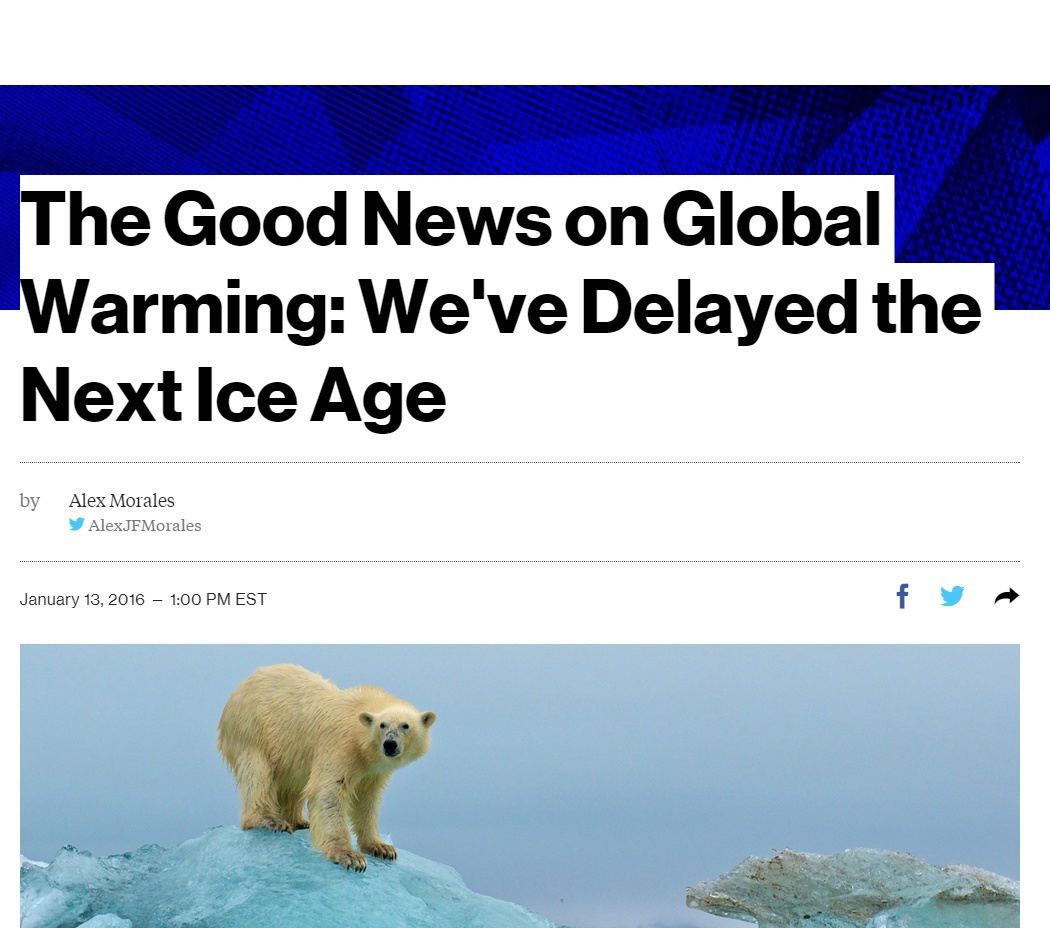 Global warming caused by fossil fuel emissions is blamed by scientists for intensifying storms, raising sea levels and prolonging droughts. Now there’s growing evidence of a positive effect: we may have delayed the next ice age by 100,000 years or more.

The conditions necessary for the onset of a new ice age were narrowly missed at the beginning of the Industrial Revolution in the 1800s, researchers at the Potsdam Institute for Climate Impact Research near Berlin wrote Wednesday in the journal Nature. Since then, rising emissions of heat-trapping CO2 from burning oil, coal and gas have made the spread of the world’s ice sheets even less likely, they said.

“This study further confirms what we’ve suspected for some time, that the carbon dioxide humans have added to the atmosphere will alter the climate of the planet for tens to hundreds of thousands of years, and has canceled the next ice age,” said Andrew Watson, a professor of Earth sciences at the University of Exeter in southwest England who wasn’t involved in the research. “Humans now effectively control the climate of the planet.”

The study reveals new findings on the relationship between insolation, a measure of the Sun’s energy reaching the planet, levels of carbon dioxide in the atmosphere, and the spread of ice sheets that characterize an ice age. The researchers in Germany were able to use computer models to replicate the last eight glacial cycles and provide predictions on when the next might occur.

The scientists found that even without further output of heat-trapping gases, the next ice age probably wouldn’t set in for another 50,000 years. That would make the current so-called inter-glacial period “unusually long,” according to the lead author, Andrey Ganopolski.

“However, our study also shows that relatively moderate additional anthropogenic CO2-emissions from burning oil, coal and gas are already sufficient to postpone the next ice age for another 50,000 years,” which would mean the next one probably won’t start for 100,000 years, he said.

“The bottom line is that we are basically skipping a whole glacial cycle, which is unprecedented.”

Flashback 1971: NASA scientists warned ‘fossil fuel-burning’ could ‘trigger an ice age’ – Before fossil fuels caused ‘global warming’ — fossil fuels caused — ‘global cooling’. “In the next 50 years,” the fine dust man constantly puts into the atmosphere by fossil fuel-burning could screen out so much sunlight that the average temperature could drop by six degrees. If sustained over “several years” — “Five to 10,” he estimated — “such a temperature decrease could be sufficient to trigger an ice age!” – Dr. S.I. Rasool of NASA – Washington Post – July 9, 1971