Dr. Richard Tol: Countries are 'sending people to [UN Summit in] Paris for no apparent reason other than to keep these people well-travelled.'

'The discussion is now about money. How much do rich countries need to pay poor countries to pretend to reduce emissions?'

'Climate policy has been about rewarding allies with rents and subsides rather than emission reduction.'

But UN Lead Author Tol was skeptical of the entire UN climate treaty process. Tol predicted that the UN climate summit will “ultimately proven to be a futile effort” and achieve nothing more than “sending people to Paris for no apparent reason other than to keep these people well-travelled.”

Tol, an economist and statistician, is the Professor of the Economics of Climate Change at the Vrije Universiteit, Amsterdam and he is ranked among the “top 50 most-cited climate scholars”. He has well over 200 publications in academic journals. 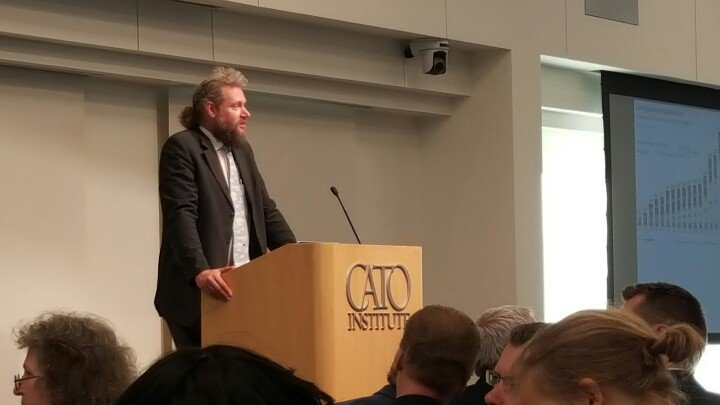 “I don’t know what will happen in Paris, and I don’t quite know what all those 50,000 people will do,” he explained. “International negotiations on binding targets and timetables have failed since 1995,” Tol said at a CATO Institute climate forum in DC today.

Tol continued:  “The discussion is now about money. How much do rich countries need to pay poor countries to pretend to reduce emissions?”

According to Tol: “Climate policy has been about rewarding allies with rents and subsides rather than emission reduction.”

“Twenty five years of climate policy has made most a little bit poorer and some a whole lot richer and it has not reduced emissions much.”

“International climate policy is shifting from a hopeless focus on binding emission targets to a more realistic pledge and review,” Tol added.

UN IPCC Lead Author Dr. Richard Tol Rips 97% consensus claim: ‘The 97% is essentially pulled from thin air, it is not based on any credible research whatsoever’

‘The Chinafication of America’: Reaction to Obama Bypassing the Senate with UN Climate Treaty: ‘Obama is taking a page from China’s government’ – New York Times: ‘U.S. seeking climate deal that would skirt Senate’: ‘Under the Constitution, a president may enter into a legally binding treaty only if it is approved by a two-thirds majority of the Senate. To sidestep that requirement, President Obama’s climate negotiators are devising what they call a “politically binding” deal that would “name and shame” countries into cutting their emissions…American negotiators are instead homing in on a hybrid agreement — a proposal to blend legally binding conditions from an existing 1992 treaty with new voluntary pledges. The mix would create a deal that would update the treaty, and thus, negotiators say, not require a new vote of ratification.’ – Marc Morano: ‘Obama is taking a page from China’s government and is seeking to bypass democracy’s ‘very detrimental’ hurdles and just impose a new UN treaty on Americans’

NYT: John Kerry ‘hopes to use his position as secretary of state to achieve a legacy on global warming that has long eluded him’

‘If you want to believe that climate researchers are incompetent, biased and secretive, Cook’s (97%) paper is an excellent case in point.’

The paper only claims that 97 percent of the scientific literature that takes a position on climate change (most does not) supports man-made global warming hypotheses. Yet supporters have used it to claim that 97 percent of scientists support global warming theories; they do not. “In fact, about three-quarters of the papers counted as endorsements had nothing to say about the subject matter,” Tol says.

UN IPCC Lead Author Dr. Richard Tol Laments: ‘Politically correct climate change orthodoxy has completely destroyed our ability to think rationally about the environment’ – Tol: ‘There is no prima facie reason to assume that any given past climate was better than the prospective one.’

UN IPCC Lead Author Dr. Richard Tol: ‘There are plenty of examples in history where everyone agreed and everyone was wrong’

Leading German Daily Paper: Climate ‘Apocalypse Will Not Take Place’…UN IPCC’s Dr. Richard Tol: ‘97% Consensus Does Not Exist’ – Germany’s print high-profile national daily the Frankfurter Allgemeine Zeitung (FAZ) which features climate economist Richard Tol titled: ‘The apocalypse won’t take place’ – ‘Tol is one of the most productive and most respected researchers in his field. He is (co)author of more than 250 papers in renowned journals and according to the Ideas-Repec databank, among the top 100 scientists worldwide.’

UN IPCC Lead Author Dr. Richard Tol: ‘The claim of a 97% consensus on global warming does not stand up’