Another Prominent Scientist Dissents: Environmental physicist Dr. Jean-Louis Pinault: ‘This is a very uneven debate, skeptics cannot enforce their arguments in scientific journals that are subject to censorship’ – Declares AGW has produced an ‘economic and political media frenzy unprecedented in the history of science’ 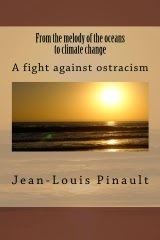 Pinault rips current peer-review process: 'I resigned myself to suspend submitting my work in peer-reviewed scientific journals, giving priority to dissemination of results.'

Dr. Pinault's research finds solar variations impact climate: He has developed a model, which he supports with extensive statistical analyses of global spatio-temporal data, whereby relatively small solar variations (relative to the large variations occurring on the lifetime of the Sun) acquire leverage on global climate via an oceanic resonance tuning that operates on the global ocean oscillations on Earth.

Writes new book: "From the melody of the oceans to climate change: a fight against ostracism", and was just released on May 10, 2014. 'Gyral wave resonance should reconcile the community of oceanographers and climatologists, skeptical or not. But subjected to the ubiquitous ostracism in 'official' scientific circles, I resigned myself to suspend submitting my work in peer-reviewed scientific journals, giving priority to dissemination of results.'

Physicist Dr. Denis Rancourt praises Pinault: 'If Pinault is correct, then it will be even more reason to conclude that modern CO2 increases don't matter and never mattered, regarding modern climate change.'

The theory of anthropogenic climate warming, i.e. resulting from the accumulation of greenhouse gases in the atmosphere, carbon dioxide in particular, has produced the economic and political media frenzy we know, unprecedented in the history of science. On the other hand, there are those who oppose who are skeptical about this hypothesis. Arguing natural climate variability observed in the past, including the recent past regarding the Little Ice Age, they refute alarmist predictions that are becoming harder to sustain as the temperature of the planet has no longer increased over the last fifteen years, while the concentration of carbon dioxide is soaring.

This confrontation between the proponents of global warming due to human activity, supported by the IPCC, and skeptics reflects a misunderstanding of the mechanisms involved in climate variability. Computers of the former allow a “bad model to be accurately wrong”, I quote William Gray, whereas the latter challenge the working methods and the scientific integrity of the IPCC members who cling tenaciously to the theory of greenhouse gases liable for global warming, which is the raison d’être of the IPCC.

But this very uneven debate, skeptics cannot enforce their arguments in scientific journals that are subject to censorship since the Copenhagen Climate Conference, should now be enriched with a phenomenon totally unknown to climatologists and oceanographers, which is the planetary wave resonance in the oceans. This discovery, which I did by chance at a time when I knew almost nothing about the oceans and climate, not only allows explaining and reproducing the warming of our planet, more precisely the middle and long-term climate variability, but also the El Niño phenomenon, the succession of wet or dry years observed in Western Europe since the 70°S, the surface currents in oceans…

This discovery gives reason to the skeptics when they observe a correlation between long-term variations in solar activity and climate. Up to now these arguments were refuted by the official theory since climate models were not able to interpret how a variation in solar activity well below the percent can impact the climate without involving the phenomenon of oceanic resonance. Then the influence of greenhouse gas emissions played the role of troubleshooter to remedy model failures.

Clearly the controversy over global warming emphasized our ignorance concerning fundamental oceanic and climatic phenomena. Gyral wave resonance should reconcile the community of oceanographers and climatologists, skeptical or not. But subjected to the ubiquitous ostracism in ‘official’ scientific circles, I resigned myself to suspend submitting my work in peer-reviewed scientific journals, giving priority to dissemination of results.

The global warming movement continues to lose scientists, many formerly with the UN IPCC.

Flashback: UN IPCC Lead Author Dr. Richard Tol admits no global warming for 17 years – Rips bias in IPCC – UN’s ‘inbuilt alarmism made me step down’ – ‘By the time the report was finished, however, it hadn’t warmed for 17 years’