Watch Now: Morano on Fox News: ‘The global warming establishment has threatened Bengtsson. They’ve bullied him. They’ve pulled his papers. They’re now going through everything they can to smear his reputation’

Aired May 16, 2014 on Fox News Special Report with Bret Baier: 'Bengtsson has been a very prolific publisher and was considered one of the top scientists in the 'mainstream' climate community,' said Marc Morano, of the website ClimateDepot.com, which is devoted to questioning global warming. 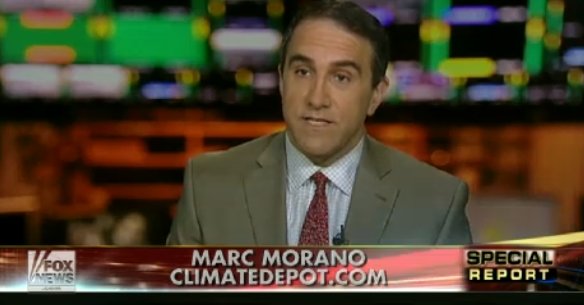 Fox News: 'Bengtsson's view helps to illustrate the cavernous divide in this debate. Climate scientists who question the consensus often say they're demonized -- unable to publish, unable to find research funding. The scientific establishment presses on -- frustrated with anyone who, in their view,would impede saving the planet. The debate raises a question about whether consensus in science is even relevant. As the novelist and global warming skeptic Michael Crichton argued,"The greatest scientists in history are great precisely because they broke with consensus." The Bengtsson allegations recall a similar controversy in 2009, dubbed “Climategate,” when hundreds of emails were leaked, several of which raised questions about whether scientists were overstating the climate change case.'