NPR Shock Report: ‘The Inconvenient Truth About Polar Bears’ — ‘There are far more polar bears alive today than there were 40 years ago’ 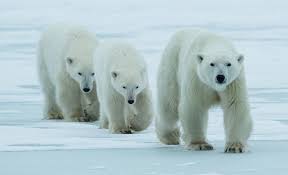 'Polar bear populations are large, and the truth is that we can't look at it as a monolithic population that is all going one way or another.'

In 2008, reports of polar bears’ inevitable march toward extinction gripped headlines. Stories of thinning Arctic ice and even polar bear cannibalism combined to make these predators into a powerful symbol in the debate about climate change.

The headlines caught Zac Unger’s attention, and he decided to write a book about the bears.

Unger made a plan to move to Churchill, Manitoba, a flat, gray place on the Hudson Bay in northern Canada accessible only by train or plane. For a few months out of the year, as the bay starts to freeze, tiny Churchill boasts as many polar bears as it does people.

Unger packed up his wife and three small kids, and set out with a big bold idea. He wanted to write the quintessential requiem of how human-caused climate change was killing off these magnificent beasts.

In the end, he came away with something totally different, Unger tells NPR’s Laura Sullivan.

On wanting to write the next great environmental tract

“My humble plan was to become a hero of the environmental movement. I was going to go up to the Canadian Arctic, I was going to write this mournful elegy for the polar bears, at which point I’d be hailed as the next coming of John Muir and borne aloft on the shoulders of my environmental compatriots …

“So when I got up there, I started realizing polar bears were not in as bad a shape as the conventional wisdom had led me to believe, which was actually very heartening, but didn’t fit well with the book I’d been planning to write.

“… There are far more polar bears alive today than there were 40 years ago. … In 1973, there was a global hunting ban. So once hunting was dramatically reduced, the population exploded. This is not to say that global warming is not real or is not a problem for the polar bears. But polar bear populations are large, and the truth is that we can’t look at it as a monolithic population that is all going one way or another.”