Faced with a deepening economic and humanitarian crisis, Sri Lanka called off an ill-conceived national experiment in organic agriculture this winter. Sri Lankan President Gotabaya Rajapaksa promised in his 2019 election campaign to transition the country’s farmers to organic agriculture over a period of 10 years. Last April, Rajapaksa’s government made good on that promise, imposing a nationwide ban on the importation and use of synthetic fertilizers and pesticides and ordering the country’s 2 million farmers to go organic.

The result was brutal and swift. Against claims that organic methods can produce comparable yields to conventional farming, domestic rice production fell 20 percent in just the first six months. Sri Lanka, long self-sufficient in rice production, has been forced to import $450 million worth of rice even as domestic prices for this staple of the national diet surged by around 50 percent. The ban also devastated the nation’s tea crop, its primary export and source of foreign exchange.

By November 2021, with tea production falling, the government partially lifted its fertilizer ban on key export crops, including tea, rubber, and coconut. Faced with angry protests, soaring inflation, and the collapse of Sri Lanka’s currency, the government finally suspended the policy for several key crops—including tea, rubber, and coconut—last month, although it continues for some others. The government is also offering $200 million to farmers as direct compensation and an additional $149 million in price subsidies to rice farmers who incurred losses. That hardly made up for the damage and suffering the ban produced. Farmers have widely criticized the payments for being massively insufficient and excluding many farmers, most notably tea producers, who offer one of the main sources of employment in rural Sri Lanka. The drop in tea production alone is estimated to result in economic losses of $425 million.

Human costs have been even greater. Prior to the pandemic’s outbreak, the country had proudly achieved upper-middle-income status. Today, half a million people have sunk back into poverty. Soaring inflation and a rapidly depreciating currency have forced Sri Lankans to cut down on food and fuel purchases as prices surge. The country’s economists have called on the government to default on its debt repayments to buy essential supplies for its people.

The farrago of magical thinking, technocratic hubris, ideological delusion, self-dealing, and sheer shortsightedness that produced the crisis in Sri Lanka implicates both the country’s political leadership and advocates of so-called sustainable agriculture: the former for seizing on the organic agriculture pledge as a shortsighted measure to slash fertilizer subsidies and imports and the latter for suggesting that such a transformation of the nation’s agricultural sector could ever possibly succeed. 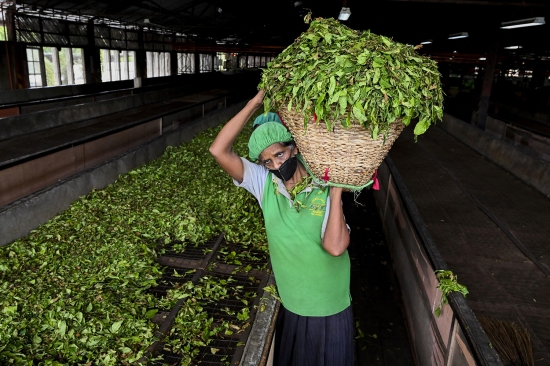 A worker carries leaves at a tea plantation in Ratnapura, Sri Lanka, on July 31, 2021. ISHARA S. KODIKARA/AFP VIA GETTY IMAGES

Sri Lanka’s journey through the organic looking glass and toward calamity began in 2016, with the formation, at Rajapaksa’s behest, of a new civil society movement called Viyathmaga. On its website, Viyathmaga describes its mission as harnessing the “nascent potential of the professionals, academics and entrepreneurs to effectively influence the moral and material developme