Progressive Democrats say they care about working people & the climate more than moderates and Republicans, but progressive policies resulted in a 30% increase in natural gas prices and rising emissions from more coal-burning. Why is that?
Why Democrats Make Energy Expensive (And Dirty)Progressives say they care more about working people and climate change than Republicans and moderate Democrats. Why, then, do they advocate policies that make energy expensive and dirty?https://michaelshellenberger.substack.com/p/why-democrats-make-energy-expensive
Progressive Democrats @BernieSanders & @PramilaJayapal, the head of the progressive caucus, sent a letter demanding the Federal Energy Regulatory Commission (FERC) investigate whether “market manipulation” is causing nat gas prices to rise 30%, an astonishing $746 per household.
But the main reason natural gas prices are rising is because progressives have restricted production. Sanders, Jayapal, and Rep. Alexandria Ocasio-Cortez (AOC) & other progressives successful fought to restrict gas production through bans on fracking & pipelines.
In 2020, Sanders celebrated efforts by progressives to cancel the Atlantic Coast pipeline. Today, New England is facing rolling blackouts and importing natural gas from Russia.
“Getting [natural] gas to [progressive Senators Ed] Markey and [Elizabeth] Warren’s Massachusetts is so difficult,” reports The Wall Street Journal, “that sometimes it comes into Boston Harbor on a tanker from Russia.”
Opinion | No Climate Warriors in Frozen FoxholesForty-one Democrats urge federal regulators to lower heating prices.https://www.wsj.com/articles/no-climate-warriors-in-frozen-foxholes-ferc-energy-prices-elizabeth-warren-ed-markey-11641515672
Democrats aren’t the only reason the United States isn’t producing enough natural gas to keep prices at the same low levels they’ve been at for the past decade. There is higher demand as the economy emerges from covid.
There is greater demand for natural gas internationally due to a bad year for wind energy in Europe. And President Joe Biden, for his part, has resisted many progressive demands to restrict oil and gas production.
German Emissions From Electricity Rose 25% In First Half Of 2021 Due To The Lack Of Wind Power, Not WillpowerIs the German renewable energy effort about overcoming guilt?https://michaelshellenberger.substack.com/p/german-emissions-from-electricity-674
But the main reason there isn’t enough natural gas production is because of successful progressive Democratic efforts to restrict natural gas production in the United States, Europe, and other parts of the world in the name of fighting climate change.
How Climate Activists Caused the Global Energy CrisisShareholder divestment campaigns caused oil and gas shortages, a return to coal, and higher emissionshttps://michaelshellenberger.substack.com/p/how-climate-activists-caused-the
Sanders and Jayapal talk about “market manipulation” and “profiteering” but to the extent there is any of either it’s because of inadequate supplies of natural gas and the pipelines to transport it.

Successful shareholder activism, known in the industry as “ESG” for environmental, social, and governance issues, resulted in less investment in oil and gas production, and more weather-dependent renewables, which result in higher prices everywhere they are deployed at scale.
Even ESG champions including Financial Times, Goldman Sachs, and Bloomberg all now acknowledge that it was climate activist shareholder efforts that restricted oil and gas investment.
Such efforts also directly led to increasing carbon emissions. Last year saw a whopping 17 percent increase in coal-fired electricity, which resulted in a six percent increase in greenhouse gas emissions. It was the first annual increase in coal use since 2014.
The reason for it was because of the scarcity and higher price of natural gas, coal’s direct replacement, not just in the U.S. but globally, since the US exports a significant quantity of natural gas.
The other reason the U.S. used more coal in 2021 is because progressive Democrats are shutting down nuclear plants. “When a nuclear plant is closed, it’s closed forever,” noted Mark Nelson of Radiant Energy Fund, an energy analytics firm.
“Coal plants can afford to operate at relatively low levels of capacity,” noted @energybants “like just 30 to 50 percent operation, and thus wait for natural gas prices, and thus demand for coal, to rise.”
Progressives claim to care more about poor people, working people, and climate change than either Republicans or moderate Democrats, who they defeat in Democratic primary elections. Why, then, do they advocate policies that make energy expensive and dirty?
A big part of the reason appears to be that they don’t know much about energy. The fact that they are demanding that FERC investigate higher prices suggests they want to keep energy prices low.

But it could also be that they rightly fear being blamed for raising energy prices.

Indeed, it would be naive to think that Sanders and other progressives didn’t realize that blocking pipelines, opposing fracking, and subsidizing renewables would make energy expensive, given that making energy expensive has been the highest goal of their main climate advisors.
Climate leader @billmckibben who subscribes to the Malthusian view that there are too many humans and we must restrict energy and development.
The Real Threat to Banks Isn’t From Climate Change. It’s From Bankers.And why nuclear saves what late capitalism destroyshttps://michaelshellenberger.substack.com/p/the-real-threat-to-banks-isnt-from
If renewables were cheap then the policies they advocate — no permitting of pipelines, restrictions on fracking, subsidies for renewables — would not be necessary. 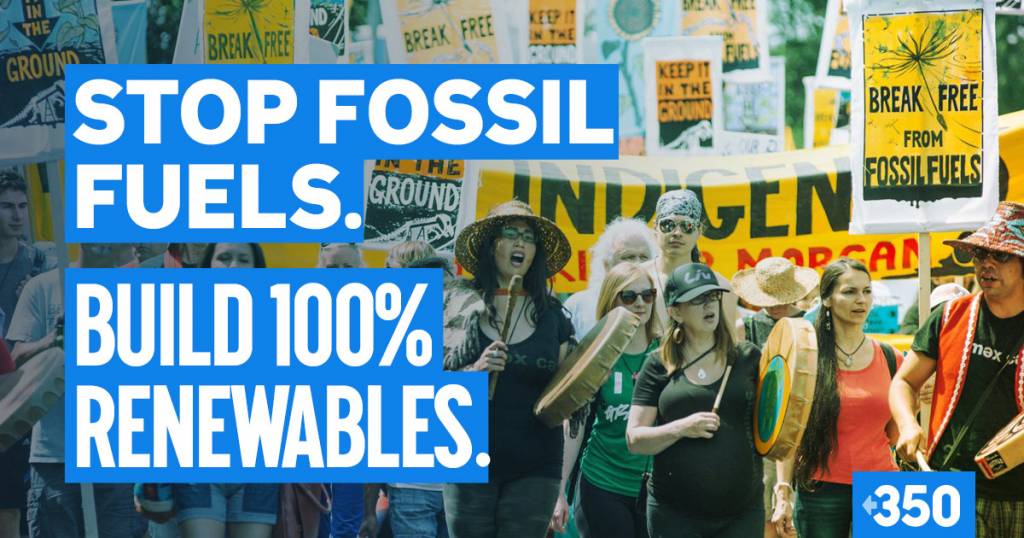 350.org: A global campaign to confront the climate crisisWe are standing up to the fossil fuel industry to stop all new coal, oil and gas projects and build clean energy future for all.https://350.org
The financial might of the climate lobby covers the wealth not only of billionaires Soros, Steyer, and Bloomberg, but also $130 trillion in investment funds, including many of the world’s largest pension funds, such as the one belonging to California public employees.
The climate lobby’s political power is equally awesome, covering the entirety of the Democratic Party and a significant portion of the Republican Party, and most center-Left parties in Europe.
But such a naked effort to transfer wealth from poor and working Americans to well-connected Democratic Party billionaires requires a powerful ideology capable of convincing journalists, investors, and policymakers. That ideology is apocalyptic environmentalism.
Today, many progressives and Democrats view climate change as the world’s number one issue. They agree with half of all people surveyed around the world that climate change could make our species extinct. Climate change serves as the apocalyptic foundation for Woke religion.
The basic narrative pushed by progressive journalists, climate activists, and their industrial sponsors for 30 years is that climate change is punishment for our sins against nature and renewables the way to redeem ourselves.
Why Wokeism Is A ReligionIntroducing the Taxonomy of Woke Religionhttps://michaelshellenberger.substack.com/p/why-wokeism-is-a-religion
Unfortunately, if Sanders is any guide, climate dogmatism has been entirely unaffected by the fact that natural disasters are declining in frequency, global emissions declined over the last decade, and climate dogmatism destroyed Biden’s agenda.
We tend to think ignorance is from the absence of information. But Sanders and other progressives show that their ignorance results from an ideology so powerful, and so reliant on supernatural beliefs, that it is better understood as a religion.
Happily, we are at the beginning of a backlash against Wokeism including efforts to “cancel” scholars, journalists, & entertainers, and to defund the police. Journalists and scholars like @bariweiss & @JohnMcWhorter are pushing back against progressive efforts to fire people.
And moderate black mayors like London Breed in San Francisco and Eric Adams in New York are seeking more balanced policies on crime.
Why Black Moderates Awoke The WokeThe backlash to progressive Wokeism, or victimology, has been brewing for years. Why did black moderates tip it over the edge?https://michaelshellenberger.substack.com/p/why-black-moderates-awoke-the-woke
Now we are seeing a political backlash within the Democratic Party against policies that make energy expensive. In Pennsylvania, a key battleground state, moderate Dem. Connor Lamb won the endorsement of labor unions, including many involved in fracking.
The endorsement gives his campaign money and momentum. “He understands that we work in the energy industry,” said the head of the Council. “We want to protect the environment but we also want to protect our jobs. And Pennsylvania has a perfect solution, natural gas.”
To the the extent Biden has not restricted oil and gas production more it’s due to moderates like Lamb and battleground states like Pennsylvania.
“Biden, from the beginning, was one of the only Democratic candidates to refuse to talk about a fracking ban of any kind,” said Lamb last fall. “It’s one of the reasons that being a puritan or an green ideologue on energy is not going to work.”
Republicans say they still intend to portray Lamb and other Pennsylvania Democrats as anti-fracking, and they may well succeed, given that they are in the same party as progressives responsible for energy shortages and fewer energy jobs in fracking than there should have been.
Whatever happens this fall, progressives will remain on the defensive for months and perhaps years to come given their role in triggering the worst global energy crisis in 50 years.
Over time, residents of New England, which remains at severe risk of energy shortages and rolling blackouts, thanks to inadequate pipelines and natural gas, will learn more about how progressives and climate activists made them vulnerable.
They will start to wonder why it is that New England has to important natural gas from Russia rather than nearby Pennsylvania.

All of this will result in a change to how people perceive the motivations of progressive demands to restrict energy.

Can progressive energy policies really be about the climate if they result in rising emissions? Are progressives really on the side of the working class if their policies result in higher energy prices? Do Soros, Bloomberg, & Steyer have the best interests of the people in mind?
As for the letter from progressives to FERC, nothing will come of it because it’s just for show. The progressives who signed it presented zero evidence of market manipulation.
As for profiteering, it is directly a result of progressive cancelations of pipelines and restrictions on fracking. And many people know the letter is nonsense. It is notable that neither Connor Lamb nor any other moderate Democrat of consequence has signed it.