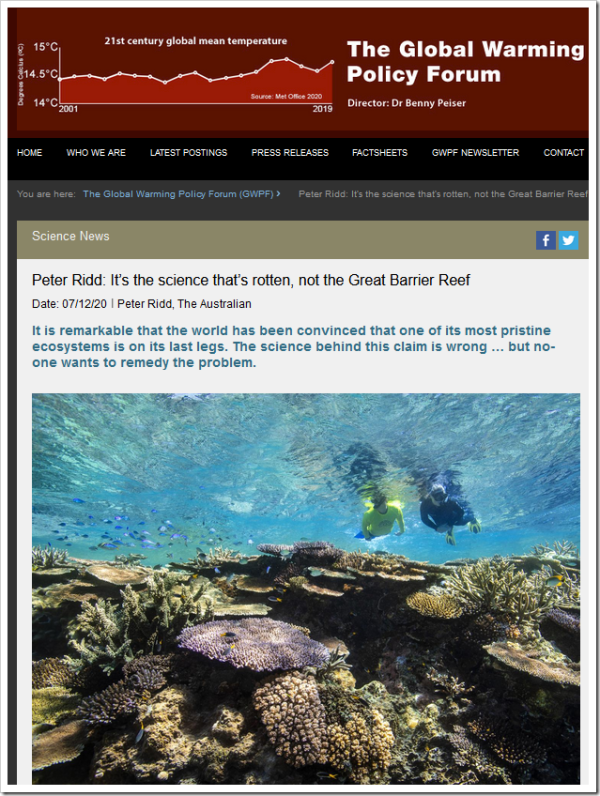 The International Union for Conservation of Nature has released its latest report on the state of the Great Barrier Reef. It has turned up the volume by one notch, claiming the threat to the reef has gone from “significant concern” to “critical”. It blames climate change, agricultural pollution, coastal development, industry, mining, shipping, overfishing, disease, problematic native species, coal dust — you name it, it is killing the reef.

But the report is just a rehash of old, mostly wrong or misleading information produced by generally untrustworthy scientific institutions with an activist agenda and no commitment to quality assurance.

It is remarkable that the world has been convinced that one of its most pristine ecosystems is on its last legs. Part of the problem is that, being underwater and a long way from the coast, very few people visit the reef. The truth is hidden. Those of us in North Queensland living adjacent to the reef, and tourists from elsewhere, can report the water is iridescent clear blue and totally unpolluted. The fish and coral are fabulous.

An aerial view of the world-famous Heart Reef in the Whitsundays. Picture: Brooke Miles/Riptide Creative

The reef occasionally conspires to give the impression it is dying. An area of coral the size of Belgium can be killed by cyclones (hurricanes), native starfish plagues or bleaching. All these events are entirely natural and are part of life on the reef. In fact, each of the 3000 individual reefs, along the entire 2000km length of the Great Barrier Reef, is a 50-100m high plateau of dead coral rubble that has built up over millennia. The live coral lives on the surface of this pile of dead ancestors.

Sixty years ago, when these cycles of death and destruction were first being discovered by scientists, it was legitimate to be concerned about whether they were unnatural. But there is now abundant evidence, almost totally ignored by the International Union for Conservation of Nature, that the reef is fine. The coral always recovers vigorously after major mortality events. Coral remains abundant on all 3000 reefs. The amount of coral, while fluctuating dramatically from year to year, is about the same today as when records began in the 1980s. The coral growth rates have not declined — if anything they have increased, as would be expected from the slight increase in temperature over the past century. Corals like it hot and grow faster in warmer water.

Ignoring evidence of the obvious good condition of the reef is not the least of the problems with this IUCN report. It also uses evidence that is patently false. For example, the report claims that coal dust blowing from ship-loading facilities is a risk to the reef, which is 100-1000km from the ports. This ridiculous claim is based on a report that was discredited by unquestioned experts on this subject, Dr Simon Apte and other scientists from the CSIRO, who showed that the results were in error by 3000 per cent. It is also highly doubtful that the original scientists were actually measuring coal dust. They were measuring poly-aromatic hydrocarbons, which are common, naturally occurring molecules not specific to coal.

It is not surprising that the IUCN report made the error of using this discredited coal dust report. Other major Australian reports on the reef also quote it. It is notable that when Apte tried to get the scientific journal and the Australian Institute of Marine science, which was responsible for the coal dust data, to correct the mistake, they refused to do anything. The science institutions have become untrustworthy.

The IUCN makes other equally scandalous mistakes. It claims that agricultural pollution is a problem despite all the measurements showing concentrations of pesticides so low they are generally undetectable with the most sensitive scientific equipment. The effect of mud washed from farms is equally negligible.

Until genuine quality assurance measures can be put in place at the reef science institutions, the problem of untrustworthy scientific evidence, reported and repeated ad nauseam, will continue. The only good news is that the next IUCN report on the reef in 2023 will not be worse than “critical” because this seems to be the worst category they have.