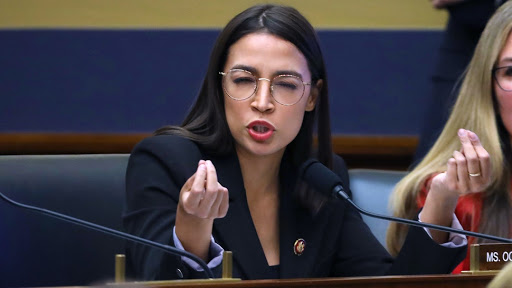 Democrat presidential candidate Joe Biden confirmed on Tuesday night that democratic socialist Rep. Alexandria Ocasio-Cortez (D-NY) was working with his campaign to promote her radical $93 trillion “Green New Deal,” which gives the government far more control over the economy and imposes a complete takeover of some private industries. The move comes after Ocasio-Cortez cheeredAmerican job losses last month that happened in the energy industry as a result of the coronavirus pandemic.

“Ocasio-Cortez will co-chair a task force for Joe Biden’s campaign on climate change, a source with direct knowledge of the planning tells CNN, a move that adds progressive credentials to the former vice president’s effort to unify the party ahead of the general election,” CNN reported. “The group is one of several task forces being formed to bridge the divide between the polices of Biden and Vermont Sen. Bernie Sanders, who ended his White House bid last month.”

An aide for Ocasio-Cortez said that she made the decision in conjunction with far-left climate change activists.

Biden later confirmed the news during an interview with News8 in Las Vegas, during which he also appeared to falsely suggest that the coronavirus pandemic was only impacting Democrats.

“Well, the good news is that Bernie has robustly endorsed me, we’ve set up joint committees together to deal with how we would deal with everything from, from the virus all the way down to education, the criminal justice system, the New Green Deal, etc,” Biden said. “And we’ve got overwhelming support. I mean we’re more united today than almost every, every single person who competed in the primary is now wholeheartedly endorsed me, campaigned around the country for me using their digital media to promote our campaign, and I’m working with Bernie and with his people.”

Looking down at his notes, Biden continued, “And so we’ve made some changes, we’ve listened to Bernie supporters and, you know, for example, we have, uh, you know, uh, congresswoman Ocasio-Cortez, she is on one of the panels as well and so I think we’re going to have a very united party and my message to all, and what they’re finding out now that the nomination process is de facto over, they’re finding out the positions I had on an awful lot of things were not accurately characterized and, uh, they’re feeling more comfortable with it. But I’m listening, I’m here, I need them and I hope they all will join us.”

Joe Biden says he set up a joint committee with Bernie Sanders to discuss the “New Green Deal” and that Democrat Rep. Alexandria Ocasio-Cortez @AOC is on one of his policy panels.

Make no mistake. Joe Biden is the bannerman for socialism. pic.twitter.com/NTHGGz9fg7

Biden has shown a great affinity for far-left members of his party during the course of his presidential campaign, including toward failed presidential and Senate candidate Beto O’Rourke, who went on to back other Democratic candidates who failed to win their elections.

If you don’t comply, there will be “consequences” and you’ll get a “visit” from law enforcement.

Biden has also called for effectively banning nearly all firearms and has said that it is “totally irrational” to let church-goers arm themselves so they can protect themselves and others from potential harm.

Joe wants to take away Americans’ guns just as badly as Beto!