‘Would Be Criminal Not To Produce Oil’: Energy Execs Rail Against Anti-Fracking Dems Ahead Of Super Tuesday

Eliminating the fossil fuel industry would result in catastrophe and human misery, according to an open letter written by 54 executives. The letter was published in the printed section of The NYT and targets Warren and Sanders, though former Vice President Joe Biden also receives scorn.

“It would be criminal not to produce the reliable, affordable energy that keeps people warm in the winter, cool in the summer …” the executives note in the letter, which appears less than two weeks before Super Tuesday, when nearly 14 states will vote on the Democratic candidates.

The ad includes a caption that reads: “Sen. Bernie Sanders calls oil and natural gas executives criminals. Vice President Joe Biden wants us in jail. Sen Elizabeth Warren calls us corrupt.” It adds: “We, the undersigned executives, would be criminal not to produce oil and gas.” 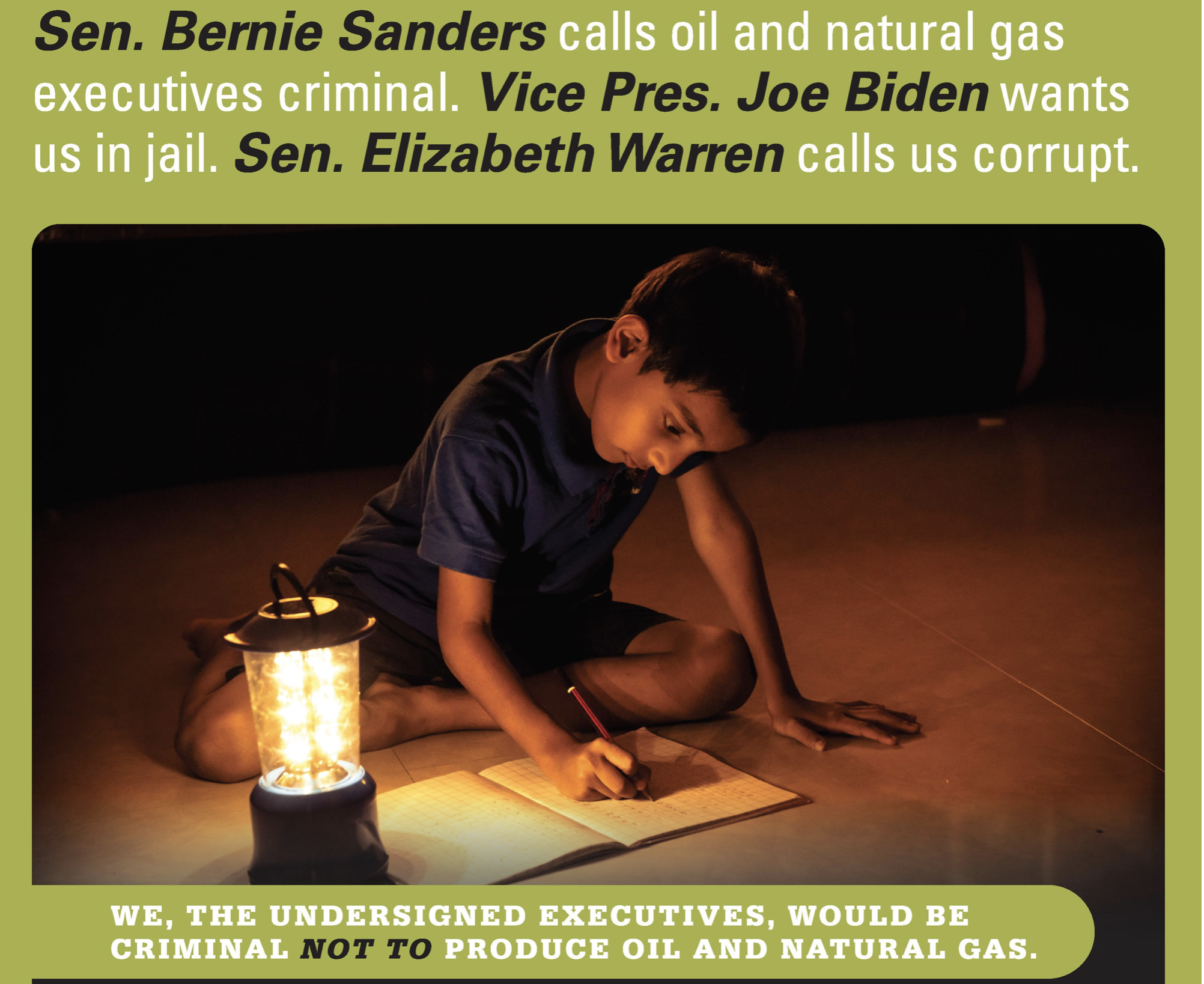 Sanders is known to deliver red meat for his anti-oil constituents. During a presidential debate in September, for instance, he suggested one of the best ways to save the Earth from global warming is to prosecute oil executives.

“What we have to do is tell the fossil fuel industry that their short-term profits are not more important than the future of this planet,” the Vermont senator said in response to a back and forth with billionaire Tom Steyer.

Sanders added: “The fossil fuel industry is probably criminally liable, because they have lied and lied and lied when they had the evidence that their carbon products were destroying the planet.” Warren, a Massachusetts Democrat, shares similar positions.

Americans must focus on pushing the envelope further than what supporters of the Green New Deal are willing to do, Warren said at a Feb. 21 CNN town hall event. She has expressed support for the legislation in the past, which seeks to phase out fossil fuels over the course of a decade.

Meanwhile, data show natural gas is slowly but surely weaning the U.S. off foreign sources of oil and gas.

Imports from the Organization of the Petroleum Exporting Countries, for example, fell to 1.5 million barrels per day in March 2019, which is the lowest level since March 1986, the Energy Information Administration reported in June.

The U.S. also became the world’s largest producer of fracked natural gas in 2012, surpassing Russia despite former President Barack Obama’s decision in 2015 to place a moratorium on such production on public lands. It also passed coal as the country’s leading source of electricity in July 2017.