by K. Walker And Jeff Dunetz

The super-rich owner of Amazon just learned that you can never, ever do enough for green activists. Jeff Bezos donated ten billion smackaroos and the climate change crazies want more.

Nothing will satisfy these people until the population has been halved, and those lucky enough to be alive are surviving in conditions similar to the dark ages, sterilized, naked, and eating bugs.

We are paradoxically told that we must spend billions of dollars to fight the inevitable “climate catastrophe,” or we’re all going to die in the next… what is it now, 11 months? Whatever.

The climate crazies shouting that both governments and individuals need to do something right now because, in  11 years, the world is going to end (I did something got a 15-year balloon mortgage). These climate activists who protest-dancing, super-glue themselves to roads, set up a blockade in front of the wrong business, or celebrate Jane Fonda getting arrested in front of the Capitol Building, aren’t so happy with Amazon’s Jeff Bezos pledging to give billions of dollars to their cause. Some are calling it a “greenwash” and slamming him as a hypocrite because his business has a massive carbon footprint.

Critics were quick to point out that Amazon has a carbon footprint that is greater than some small countries and gets tax breaks, which they find offensive. They also question where the funding will go and how exactly it will help in fighting climate change.

Amazon said it emitted 44.4million metric tons of carbon dioxide in 2018, which is more than some small countries.

Furthermore, critics questioned how the initiative would operate, it being privately funded, Bezos will be have full control and its activities will not necessarily be transparent.

In outlining his project Bezos only provided rudimentary details saying it ‘will fund scientists, activists, NGOs.’

Bezos posted the announcement that he was starting Bezos Earth Fund on Instagram writing:

“Today, I’m thrilled to announce I am launching the Bezos Earth Fund.⁣⁣⁣
⁣⁣⁣
Climate change is the biggest threat to our planet. I want to work alongside others both to amplify known ways and to explore new ways of fighting the devastating impact of climate change on this planet we all share. This global initiative will fund scientists, activists, NGOs — any effort that offers a real possibility to help preserve and protect the natural world. We can save Earth. It’s going to take collective action from big companies, small companies, nation states, global organizations, and individuals. ⁣⁣⁣
⁣⁣⁣
I’m committing $10 billion to start and will begin issuing grants this summer. Earth is the one thing we all have in common — let’s protect it, together.⁣⁣⁣”

Ten Billion is a lot of cash!  Well…except for Democratic Party politicians.

But it was quickly noted that Amazon’s business model relies on fossil fuel and has made deals with oil and gas companies.

Others drew attention to the plight of Bezos’ workers around the world who have endured savage working conditions to meet cost-cutting retail demands.

Many commented on the hypocrisy from a man whose company makes its billions from packaging items with papers and plastics and delivers them by burning fossil fuels.

But it is all those deals that help Amazon to make money so Bezos can donate to the climate change hypothesis.

However, the lefty blue-check eco-activists grabbed their smartphones and tweeted their outrage because Bezos is really a capitalist villain, you see. The answer is to move to socialism and take their money.  Wait! According to estimates from Forbes, the 77-year-Bernie Sanders, their socialist hero, is worth about $2.5 million. Are they going to take away Bernie’s money too?

Yesterday Jeff Bezos announced he would commit $10B into a new venture called the Bezos Earth Fund. All that money could help fund a Green New Deal if Amazon paid its taxes. We stand in solidarity with the workers at Amazon organizing to make this happen. https://350.org/press-release/bezos-climate-pledge/ …

46 people are talking about this

Jeff Bezos is the richest man on

64 people are talking about this

NEW REPORT: @Amazon CEO @JeffBezos just spent a stunning $165 MILLION for his Beverly Hills mansion. With that sum, he could cover ALL 2019 TAXES his company plans to pay with $3 MILLION left. Meanwhile @Amazon workers struggle just to get by. Shameful.https://www.marketwatch.com/story/jeff-bezos-spent-more-on-his-new-home-in-beverly-hills-than-amazon-has-paid-so-far-in-us-federal-income-tax-for-2019-2020-02-15 …

23 people are talking about this

As Shakespeare wrote in Macbeth, “The attempt and not the deed confounds us.”

Others say it’s a way for him to “greenwash” his company’s carbon footprint.

To be quite honest, #JeffBezos the biggest threat to our planet is tax avoidance. Throwing 10 billion at the Climate Emergency isn’t about saving the planet but you white washing your company’s culpability in it.

42 people are talking about this

Instead of a small donation to greenwash his company’s devastating climate record, Jeff Bezos should try paying his taxes. http://dlvr.it/RMx3Vv

Instead of a small donation to greenwash his company’s devastating climate record, Jeff Bezos should try paying his taxes.

2,415 people are talking about this

Wow. Reich sounds a bit envious of Bezos’s success. After all, Reich is just a millionaire. According to The Richest, Reich’s net worth is in the neighborhood of $4 million.

Jeff Bezos’ Beverly Hills mansion has: —3 saunas —2 guesthouses —A nine-hole golf course —A tennis court —A “motor court” with gas pumps Let’s not confuse that for his DC mansion, which has: —2 elevators —25 bathrooms —1,006 light fixtures —A full movie theater Tax the rich.

7,874 people are talking about this

HOLY COW! Bezos doesn’t have cable TV or internet access?  In the Tempest, Shakespeare, the Boid of Avon wrote: “Some are born great, some achieve greatness, and some have greatness thrust upon them.”  But one would imagine all three categories would have cable and internet.

4,058 people are talking about this

This guy must have spoken to AOC, “Kill the job makers!”

Commentator Ana Navarro-Cárdenas weighed in, and like many others were slamming Amazon for not paying its “fair share” in taxes.

Not of a fan of vilifying billionaire donors. All Americans should pay fair share of taxes. @Amazon, @JeffBezos, I’m talking you you. But whether you grew-up a trust-fund baby or a latch-key kid, whether you’re rich or deep in debt, in America we all have same political rights.

769 people are talking about this

Of course, she is a fan of vilifying billionaires, she is a liberal who works for CNN.

Taxes, which Amazon avoids paying, are better than charity. The Green New Deal is also a lot better than a Bezos Earth Fund, which @JeffBezos has only provided “rudimentary details” about. https://twitter.com/nytimes/status/1229484492018065408 …

Jeff Bezos, Amazon’s chief executive and the world’s richest man, said that he was committing $10 billion to address the climate crisis https://nyti.ms/2HyNL9M

65 people are talking about this

Ben, are you upset that the Bezos donation won’t bring the world economy back to the stone age like the green new deal? 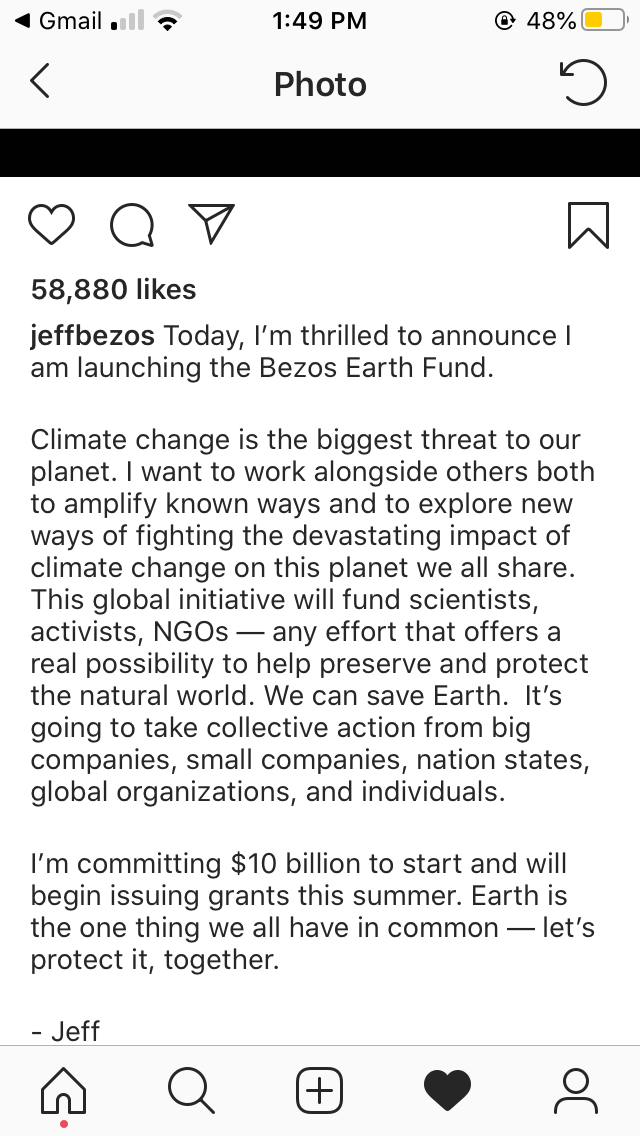 165 people are talking about this

Or even prove whether or not the climate change hypothesis is real or not.

53 people are talking about this

Please define what you mean by “fair share.”  How much money would that be? And explain how that will solve the world’s problems. Other than contracting the job market.

Jonah Blank says that the $10 billion that Bezos has pledged is not really from him, but the money that was “stolen” from taxpayers.

Yes, #JeffBezos is the world’s richest man largely because #Amazon pays no taxes. So, yes, this $10 billion is largely money that comes from you and me (that is: The taxpayers of every country where Amazon operates). BUT he’s using it to fight #ClimateChange. So:

Jeff Bezos, Amazon’s chief executive and the world’s richest man, said that he was committing $10 billion to address the climate crisis https://nyti.ms/2HyNL9M

Jonah that’s my money? How much came from me? Should I call the cops? Can I at least get an extra discount when I buy from Amazon?

Sure, Amazon has problems with surplus packaging, treatment of employees, and avoiding taxes by exploiting loopholes — and none of that is something that can be ignored — but the man just pledged the GDP of a small country to the left’s cause célèbre. Where’s the gratitude? Where is the applause? Oh “Lord, what fools these mortals be! ”   (from Shakespeare’s A Midsummer Night’s Dream

Hollywood celebs are fêted when the jet all over the place to speak at climate action events.

Oh, wait. I forgot. They’re not mustache-twirling capitalists like Bezos.