AOC claims: 'Fracking is destroying our land and our water.'

Rep. Alexandria Ocasio-Cortez introduced a nationwide fracking ban Wednesday as Democratic presidential candidates work to paint themselves as moderates ahead of the 2020 election.

The Democratic New York congresswoman’s bill is a companion to Vermont Sen. Bernie Sanders’s legislation seeking to ban fracking across the country by 2025. If passed, the laws would prohibit natural gas production within 2,500 feet of homes and schools by 2021 and help transition energy workers away from the industry.

“Fracking is destroying our land and our water,” Ocasio-Cortez wrote Wednesday on Twitter. “It is wreaking havoc on our communities’ health. We must do our job to protect our future from the harms caused by the fracking industry.” Sanders announced his bill in February.

Fracking is destroying our land and our water. It is wreaking havoc on our communities’ health. We must do our job to protect our future from the harms caused by the fracking industry. That is why I am proud to introduce the Fracking Ban Act with @RepDarrenSoto today. 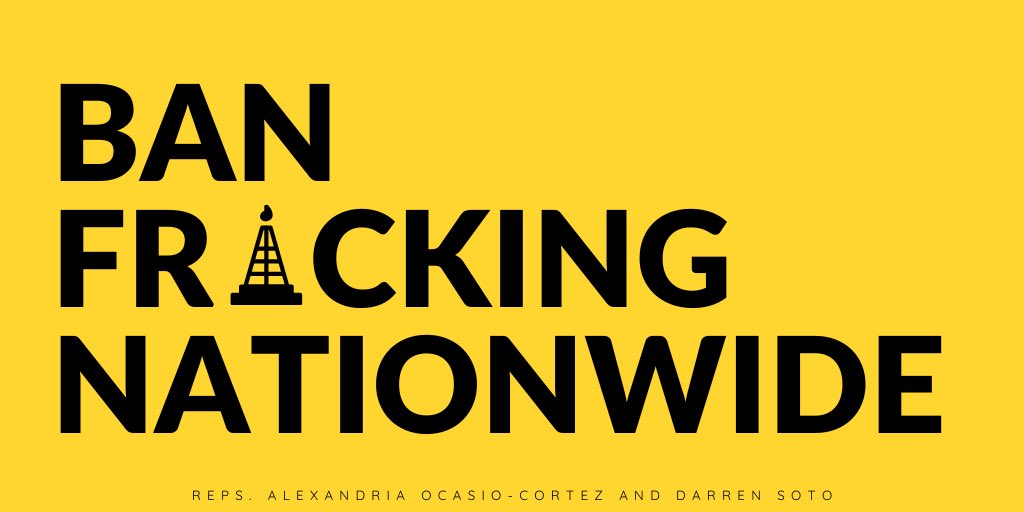 1,496 people are talking about this

Democratic Rep. Darren Soto of Florida is co-sponsoring the bill. (RELATED: Here Are The Democratic Lawmakers Who Are Trying To Distance Themselves From Ocasio-Cortez’s Green New Deal)

“If we want to transition from fossil fuel emissions as we work towards building a 100 percent clean economy, pulling back from fracking is a critical first step,” he said in a statement. “Failure to act will only make the crisis at hand even more detrimental for future generations of Americans.”

Ocasio-Cortez and Soto’s bill comes less than a year after Ocasio-Cortez introduced the so-called Green New Deal, which, among other things, calls for “10-year national mobilizations” toward addressing climate change.

The Green New Deal would reportedly phase out fossil fuels within 12 years, but could cost trillions of dollars, reports show. Americans could be forced to pay up to $93 trillion to implement the proposal over 10 years, conservative-leaning American Action Forum (AAF) noted in a study in February 2019.

Democratic Sens. Elizabeth Warren signed on as Senate co-sponsors of the proposal before it met its demise in the Senate in March 2019. She is running for president and is one of the progressive candidates who is demanding radical change on energy production.