The Media Claims It’s T-Shirt Weather In Antarctica! ‘One day’s weather is climate!’ – – Reality check: ‘Temperatures have barely changed at all since the 1970s’

Not mentioned by #FakeNews CNN:

The 'record' was caused by a regional ‘foehn’ event over the area — a rapid warming of air coming down a slope or mountain.

When one day’s weather is climate!

Argentine scientists on the Esperanza base who confirmed the reading said that wasn’t the only record broken this week. The nation’s Marambio site registered the highest temperature for the month of February since 1971. Thermometers there hit 14.1 Celsius, above the previous February 2013 reading of 13.8 Celsius.

The reports are shocking, but not surprising, said Frida Bengtsson, who is leading a expedition to the Antarctic for the environmental group Greenpeace.

“We’ve been in the Antarctic for the last month, documenting the dramatic changes this part of the world is undergoing as our planet warms,” she said in an email. “In the last month, we’ve seen penguin colonies sharply declining under the impacts of climate change in this supposedly pristine environment.”

Antarctica is among the fastest-warming regions in the planet, with the Antarctic Peninsula, where the Argentine bases are located, warming particularly quickly, according to the World Meteorological Organization. Average temperatures on the continent have risen almost 3 degree Celsius over the past 50 years, and during that time glaciers along the west coast of the Antarctic Peninsula have retreated.

WMO experts will now investigate whether the warm event recorded by Argentine scientists is a weather phenomenon known as foehn. That is a common event in Alpine regions that often involves high winds at altitude and the rapid warming of air as it heads down slopes or peaks, driven by significant air pressure differences, the WMO said in a statement.

The WMO will also determine whether the temperature extreme is a new record for the entire Antarctic landmass. The Signy island in the Antarctic region, which includes everywhere south of 60 degrees latitude, recorded an all-time high temperature of 19.8 Celsius in January 1982. The average annual temperature ranges from about -10 Celsius on the Antarctic coast to -60 Celsius at the highest points of the interior.

So does this mean the Antarctic is going into meltdown?

For a start, Bloomberg are incorrect in stating that the previous record was five years ago. In fact, the previous highest temperature was 18.0C set as long ago as 13th March 1979: 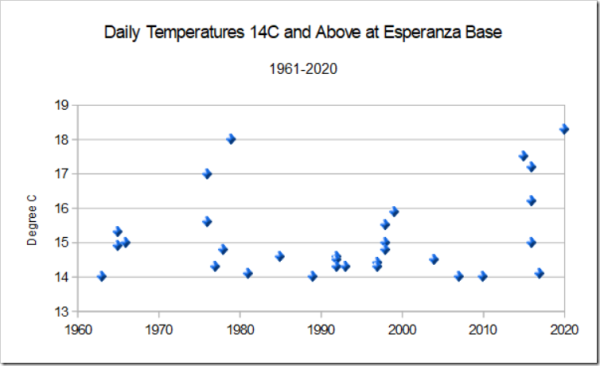 A increase from 18.0C to 18.3C over a period of 41 years is hardly cause for panic, particularly when foehn winds can make such a big difference. And as the graph shows, occasional warmish days at Esperanza are not unheard of.

Longer climate trends at Esperanza show a rise in temperatures until around 1980, since when there has been little change:

More significantly though, summer temperatures have actually been steadily declining there since 2002: 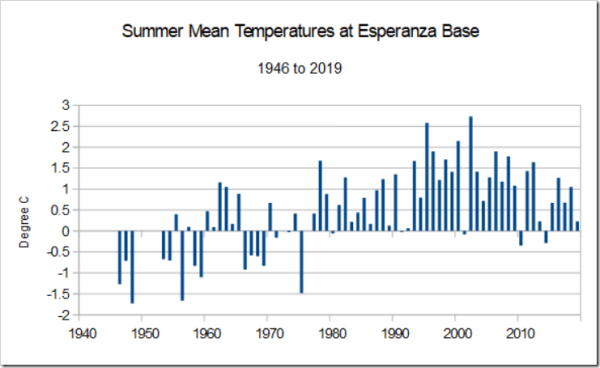 Which brings us to this ludicrous claim:

Antarctica is among the fastest-warming regions in the planet, with the Antarctic Peninsula, where the Argentine bases are located, warming particularly quickly, according to the World Meteorological Organization

As we are increasingly finding out, it appears that most places in the world are “warming faster than everywhere else ”!

Unsurprisingly, when we check the actual data though, we find nothing of the sort. Temperatures have in fact barely changed at all since the 1970s:

But apparently a “scientist” from Greenpeace, who has been there just a month, can see the dramatic changes this part of the world is undergoing as our planet warms.