Empirical evidence is the bane of all climate change ‘doomers’ since it contradicts what they’ve been told as being true.

In a nutshell, the doomer contention is that a civilization doomsday will happen within the next 12 years because of climate change.

However, fortunately for the world and its inhabitants, there is absolutely zero empirical evidence supporting the claimed soon-to-be “doomsday” from growing CO2 emissions.

And the pale orange line with red circles is the plot of HadCrut global temperature changes over the preceding 12 months, all periods (red circles) ending in November.

From a visual interpretation of the chart, there appears to be a cause and effect relationship between past human CO2 emissions and the subsequent change in levels of atmospheric CO2. The r2 for said relationship is +0.49, which suggests there is statistical evidence that at least a portion of the higher atmospheric CO2 levels is due to the many years of human fossil fuel emissions. 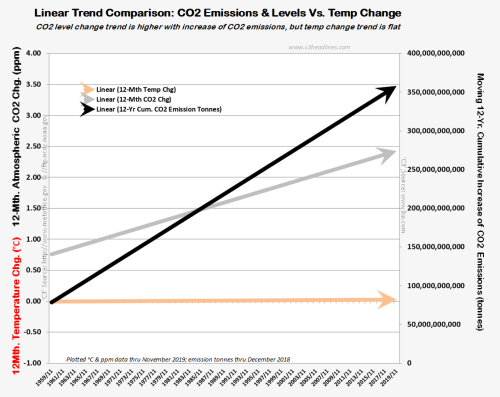 This second chart shows the trend lines of the plotted datasets from the prior chart.

The trend line for temperature change is essentially flat, while the trend lines for both CO2 emission tonnes and atmospheric CO2 levels are significantly upward sloping.

Conclusion: It would be reasonable to assume from the available evidence that as human CO2 emissions increase, the atmospheric CO2 levels will likely follow suit.

But the empirical evidence for the claim that growing CO2 emissions will cause huge warming changes is non-existent, even after decades of gigantic output of human CO2 emissions.

The doomers’ fear that increasing human CO2 emissions will result in rapid changes in global warming and thus a climate doomsday is not only unlikely, it is scientifically illiterate without any empirical merit.

Note: Each of the 3 dataset plots contain 61 datapoints since the first full year (1959) of CO2 data collection from the Mauna Loa, Hawaii measurement station. Excel was used to calculate all 12-month changes and to calculation moving 12-year total of CO2 emissions; Excel also used for charts of datapoints and their respective linear trends and r2. Source of HadCrut 4.6 global temperature anomalies; source of CO2 atmospheric CO2 levels (ppm); source of CO2 emissions in metric tonnes. And the relationship between the 12-month temperature changes and the the 12-month changes in atmospheric CO2 levels (ppm) has a r2 of +0.01 – might as well be zero. Those stubborn facts can be so hurtful…for doomers and alarmists.