Climate Kid Greta Thunberg Testifies to Congress: ‘I want you to unite behind the science…I want you to take action’

The House Committee on Foreign Affairs and Select Committee on the Climate Crisis are holding a joint hearing on Wednesday billed as “Voices Leading the Next Generation on the Global Climate Crisis” and will feature the testimony of Greta Thunberg, the 16-year-old Swede who starting a global school walkout movement, Fridays for Future.

Thunberg, who has said her struggle with Asperger’s syndrome inspired her activism, traveled to the U.S. last month on a racing yacht to prevent making a “carbon footprint” by flying here from Europe.

Also parting ways with traditionally prepared testimony submitted to Congress ahead of hearings, Thunberg instead gave the committee the United Nation’s IPCC Special Report on Global Warming released in October of 2018. 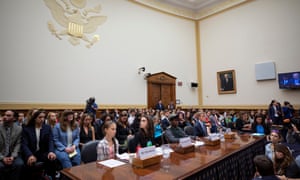 “And then I want you to take action,” Thunberg wrote.

Other young people who will be testifying include Jamie Margolin, co-founder of This is Zero Hour; Vic Barrett, a fellow at the Alliance for Climate Education; and Benji Backer, a conservative activist and president of the American Conservation Coalition.

.@GretaThunberg to Congress: “I know you are trying but just not hard enough.” She’s right. https://t.co/25s6epaXrq

American youth activist Jamie Margolin has come steaming in with her prepared opening statement. She is suing her state, Washington, over climate change.

“People who say we have a great future ahead are lying to my face,” she told the congressional hearing.

She points out that the destruction already seen in the world from the climate crisis “will get worse” and her generation is being left a terrible legacy.

“The government cannot even begin to imagine the size of the political shift that needs to happen to act on the climate crisis, she says. “The youth are calling for a new era altogether…we only have a few months left to transfer to a renewable energy economy. People call my generation Generation Z as if we are the last generation, but we are not, we are the GND Generation – the green new deal generation,” she said.