"The scientific evidence simply doesn’t support any link between drought and climate change. The IPCC was right to express low confidence in any global-scale observed trend."

Weather extremes are a commonly cited line of evidence for human-caused climate change. Despite the UN’s IPCC (Intergovernmental Panel on Climate Change) having found little to no evidence that global warming triggers extreme weather, the mainstream media and more than a few climate scientists don’t hesitate to trumpet their beliefs to the contrary at every opportunity.

In this and subsequent blog posts, I’ll show how the quasi-religious belief linking extreme weather events to climate change is badly mistaken and at odds with the actual scientific record. We’ll start with drought.

Droughts have been a continuing feature of the earth’s climate for millennia. Although generally caused by a severe fall-off in precipitation, droughts can be aggravated by other factors such as elevated temperatures, soil erosion and overuse of available groundwater. The consequences of drought, which can be catastrophic for human and animal life, include crop failure, starvation and mass migration. A major exodus of early humans out of Africa about 135,000 years ago is thought to have been driven by drought.

Getting a good handle on drought has only been possible since the end of the 19th century, when the instrumentation needed to measure extreme weather accurately was first developed. The most widely used gauge of dry conditions is the Palmer Drought Index that measures both dryness and wetness and classifies them as “moderate”, “severe” or “extreme.” The figure below depicts the Palmer Index for the U.S. during the past century or so, for all three drought or wetness classifications combined. 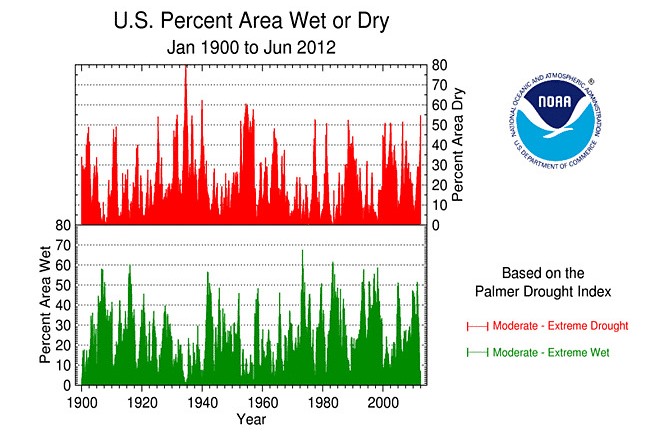 What jumps out immediately is the lack of any long-term trend in either dryness or wetness in the U.S. With the exception of the 1930s Dust Bowl years, the pattern of drought (upper graph) looks boringly similar over the entire 112-year period, as does the pattern of excessive rain (lower graph).

Much the same is true for the rest of the world. The next figure illustrates two different drought indices during the period 1910-2010 for India, a country subject to parching summer heat followed by drenching monsoonal rains; negative values denote drought and positive values wetness. The two indices are a version of the Palmer Index (sc-PDSI, top graph), and the Standardized Precipitation Index (SPI, bottom graph). The SPI, which relies on rainfall data only, is easier to calculate than the PDSI, which depends on both rainfall and temperature. While both indices are useful, the SPI is better suited to making comparisons between different regions.

You’ll see that the SPI in India shows no particular tendency over the 100-year period toward either dryness or wetness, though there are 20-year intervals exhibiting one of the two conditions; the apparent trend of the PDSI toward drought since 1990 is an artifact of the index. Similar records for other countries around the globe all show the same thing – no drying of the planet as a whole over more than 100 years.

Recently, the mainstream media created false alarm over drought by mindlessly broadcasting the results of a new study, purporting to demonstrate that global warming will soon result in “unprecedented drying.” By combining computer models with long-term observations, the study authors claim to have definitively connected global warming to drought.

But this claim doesn’t hold up, even in the study’s results. Although the authors were able to match warming to drought conditions during the first half of the 20th century, their efforts were a dismal failure after that. From 1950 to 1980, the “fingerprint” of human-caused global warming completely disappeared, in spite of ever-rising CO2 in the atmosphere. And from 1981 onward, the fingerprint was so faint that it couldn’t be distinguished from background noise. So the assertion by the authors that global warming causes drought is nothing but wishful thinking.

As further evidence that climate change isn’t exacerbating drought, the final figure below shows the Palmer Index for the U.S. since 1996. Just like the record for the period from 1900 up to 2012 illustrated in the first figure above, there is no discernible trend in either dryness or wetness. While the West and Southwest have both experienced lengthy spells of drought during this period, extreme dry conditions now appear to have abated in both Texas and California. 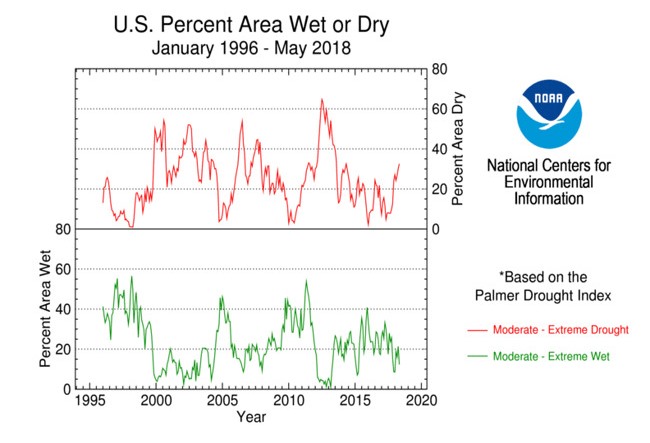 In summary, the scientific evidence simply doesn’t support any link between drought and climate change. The IPCC was right to express low confidence in any global-scale observed trend.

Next: No Evidence That Climate Change Causes Weather Extremes: (2) Floods