The number of ‘green collar’ jobs is set to triple by the end of the next decade under Government plans to boost the offshore wind industry.

Ministers are expected later this week to announce a major partnership between Government and the burgeoning industry to build on the success of the mega-turbines dotting Britain’s coastline.

The ‘sector deal’ is the tenth to be undertaken by ministers as part of the UK’s industrial renaissance and could spur the number of highly-skilled jobs within the green energy sector from 7,200 today to 27,000 jobs by 2030.

In addition, ministers believe the proportion of women working in wind could more than double from around 16pc today to 33pc by 2030, before ultimately rising to 40pc.

Claire Perry, the energy and clean growth minister, described the green economy as “the greatest economic opportunities of our time”, and said she wants to ensure that women and young people “benefit from this sea-change”.

The long-awaited deal, first reported in the Sunday Telegraph, is expected to grant the industry fresh Government funds in return for industry pledges that can help share the financial benefit across the wider economy.

The industry has proposed working with education institutions to help develop the skilled graduates which will take up a rising number of apprenticeships in the industry.

I wonder what happened to all those 400,000 green jobs, which Ed Miliband and Peter Mandelson promised us in 2009, gullibly echoed by Geoffrey Lean? 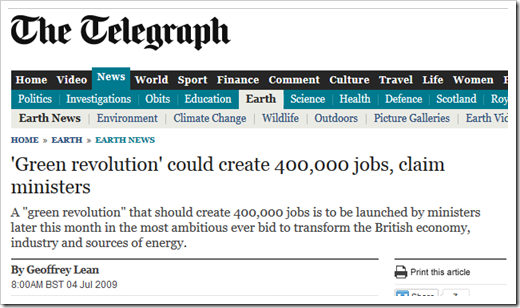 Detailed plans for expanding renewable energy tenfold and cutting emissions of carbon dioxide and other greenhouse gasses that heat up the planet – all in little more than a decade – will be announced.

The plans will be spelt out in three documents due to be published in about ten days time.

Ed Miliband, the Energy and Climate Change Secretary, will unveil a White Paper that will spell out how emissions will be cut by at least 34 per cent on 1990 levels by 2020 and a ‘Renewable Energy Strategy’ to increase its use to 15 per cent of Britain’s total energy supplies by the same date.

Lord Mandelson, the Business Secretary, will launch a ‘Low Carbon Industrial Strategy’ which the Government hopes will create 400,000 new jobs in environmental industries over eight years and “transform our whole economy and change our industrial landscape, our supply chain and the way in which we all work and consume”.

Ministers expect the expansion of renewables alone to create 160,000 new green jobs, and even more are expected to result from measures to save energy, such as through better insulation of buildings.

Additional investments of around £40 billion are expected in renewable electricity generation projects up to 2020, following updated contract terms and strike prices published today and wider reforms to the electricity market…..

Increasing the amount of home-grown renewable energy will boost energy security, reduce reliance on imported fossil fuels, and support up to 200,000 jobs by 2020.

We wait to hear how many more millions of taxpayers’ money Claire Perry intends to pour into the offshore sector!