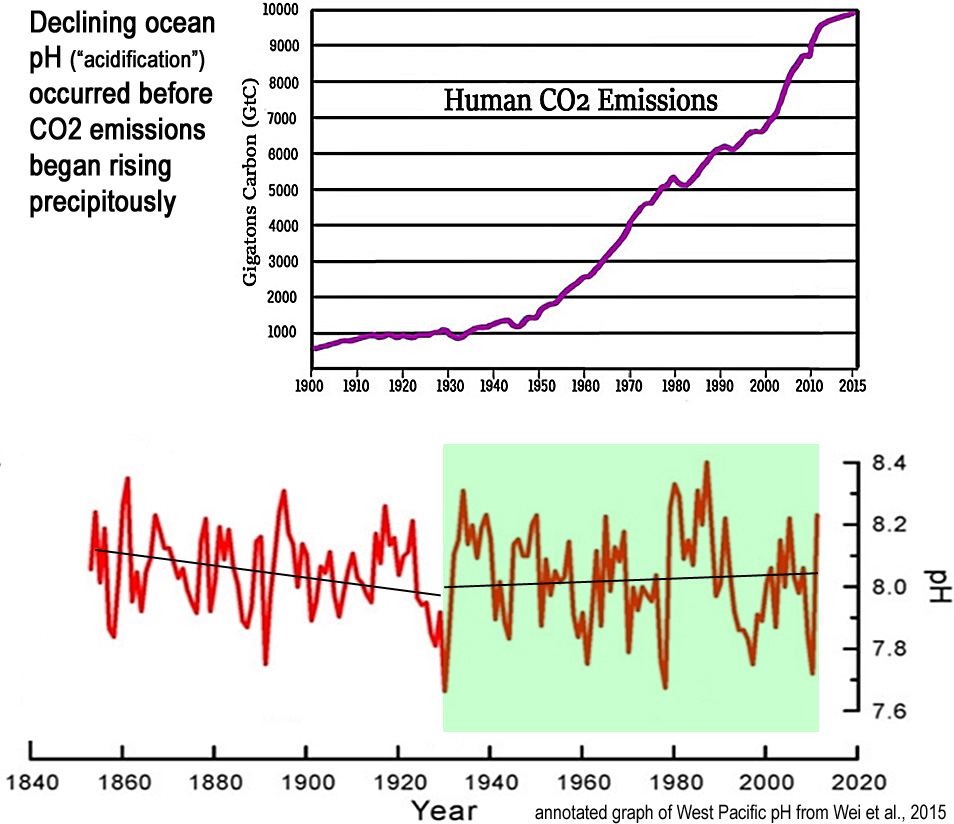 Is “acidification” occurring too rapidly for species to adapt?

It is commonly claimed that this long-term decline in pH, or “acidification”, is occurring far too rapidly for the oceanic biosphere to adapt. Consequently, there are alarmist claims that the pH changes in the last few hundred years are so extreme they will lead to a mass extinction event. 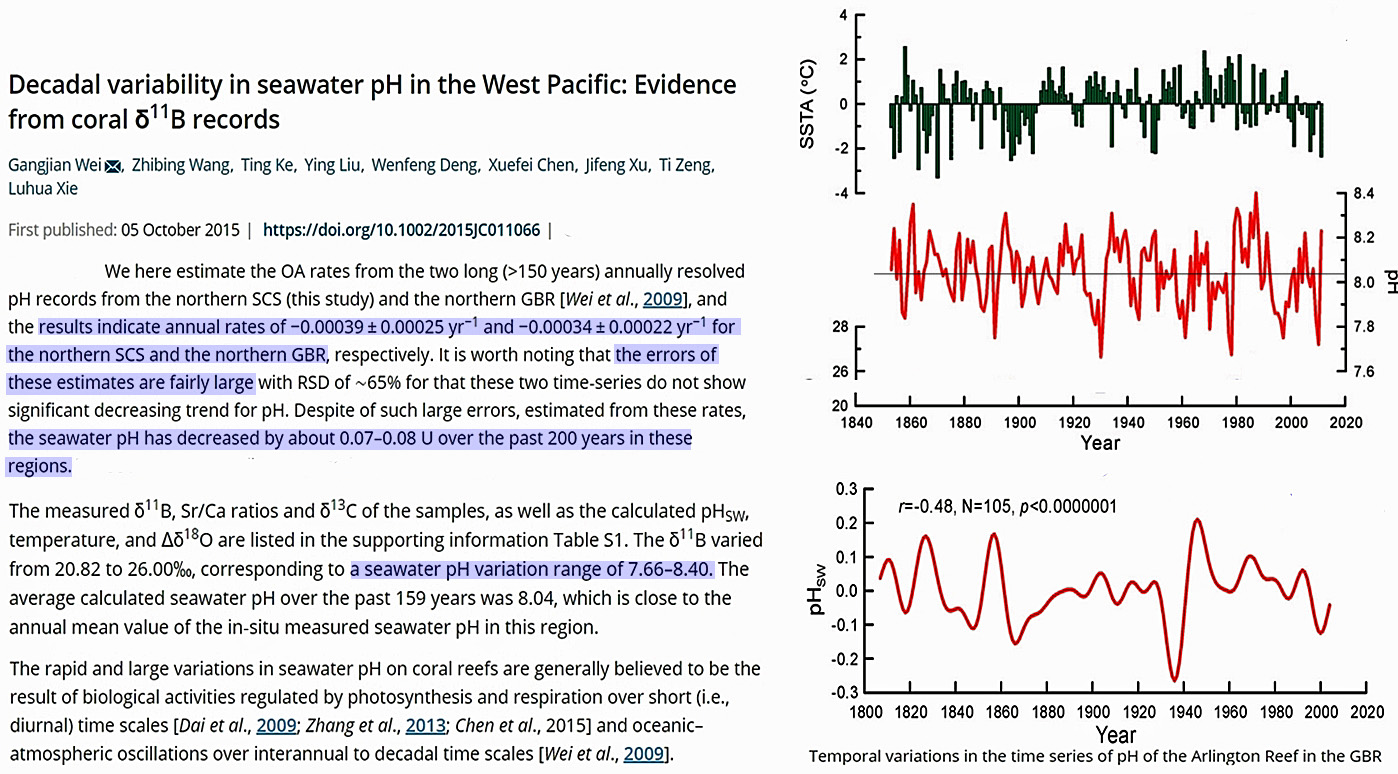 By way of comparison, from one season to the next, or over the course of less than 6 months, pH levels naturally change by ±0.15 pH units, or twice the overall rate of the last 200 years.

On a per-decade scale, the changes are even more pronounced. Oceanic pH values naturally fluctuate up and down by up to 0.6 U within a span of a decade, with an overall range between 7.66 and 8.40. This is decadal rate of pH change is larger than the overall 200-year trend (0.07-0.08) by a factor of 8. 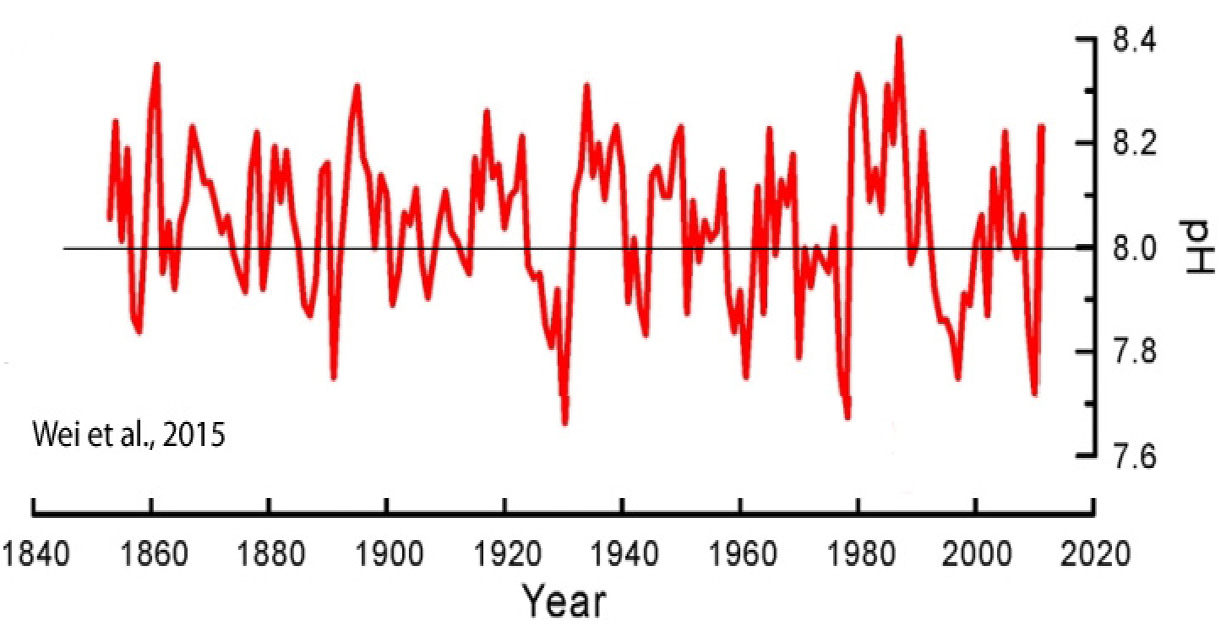 If the oceanic biosphere was incapable of adapting to the modern rate of long-term change (-0.07-0.08/200 years), or to the frequently-realized seawater “acidic” values of 7.7 or 7.8, one would think this vulnerability would have been observed at some point in the last 200 years.

Many of the highly cited pH trend studies choose a starting point from the recent decades rather than from a long-term record. Dore et al. (2009), for example, chose 1988. 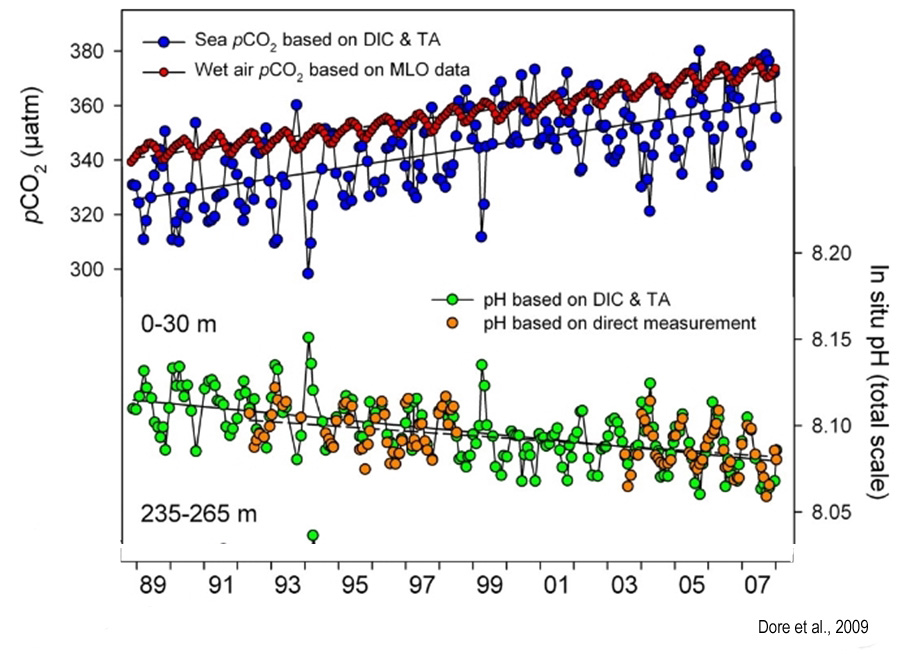 Using recent decades has the effect of illustrating that rapid pH decline, or “acidification”, coincides with dramatically rising CO2 emissions. This is the intended representation, of course, because it is assumed that we humans are responsible for “acidifying” the oceans. 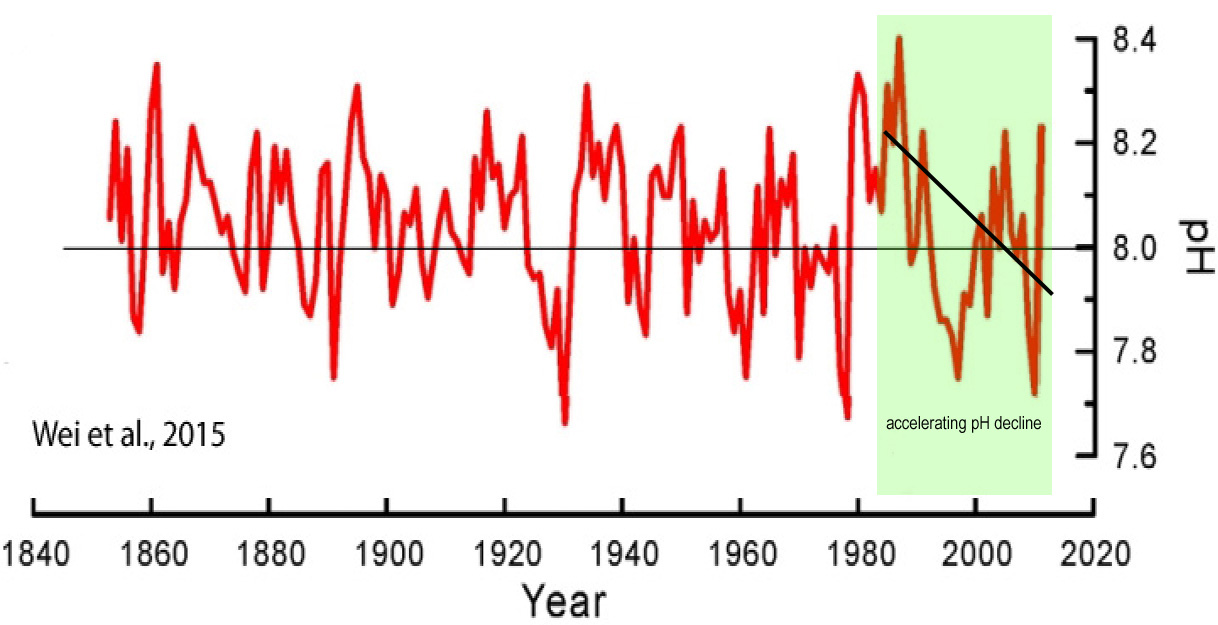 What if we choose 1930 as the “acidification” starting point?

If CO2 emissions predominantly drive trends in oceanic pH, the correlation between pH decline and an explosive rise in emissions could presumably be established beginning around the 1930s, or when CO2 emissions began to rise dramatically.

Interestingly, an entirely different pattern emerges if we use 1930 rather than more recent decades as the starting point for pH trend detection.

Namely, the long-term decline in pH can mostly be found in the decades prior to the 1930s, or when steep increases in CO2 emissions were notoccurring.

The post-1930s period even suggests a slightly rising pH trend.

In other words, after CO2 emissions began rising precipitously in the 1930s, the oceans have become less “acidic”.

This determination would appear to undermine the claim that human activity, and not natural variation, is what drives the long-term declining trend (0.07 to 0.08) in oceanic pH. 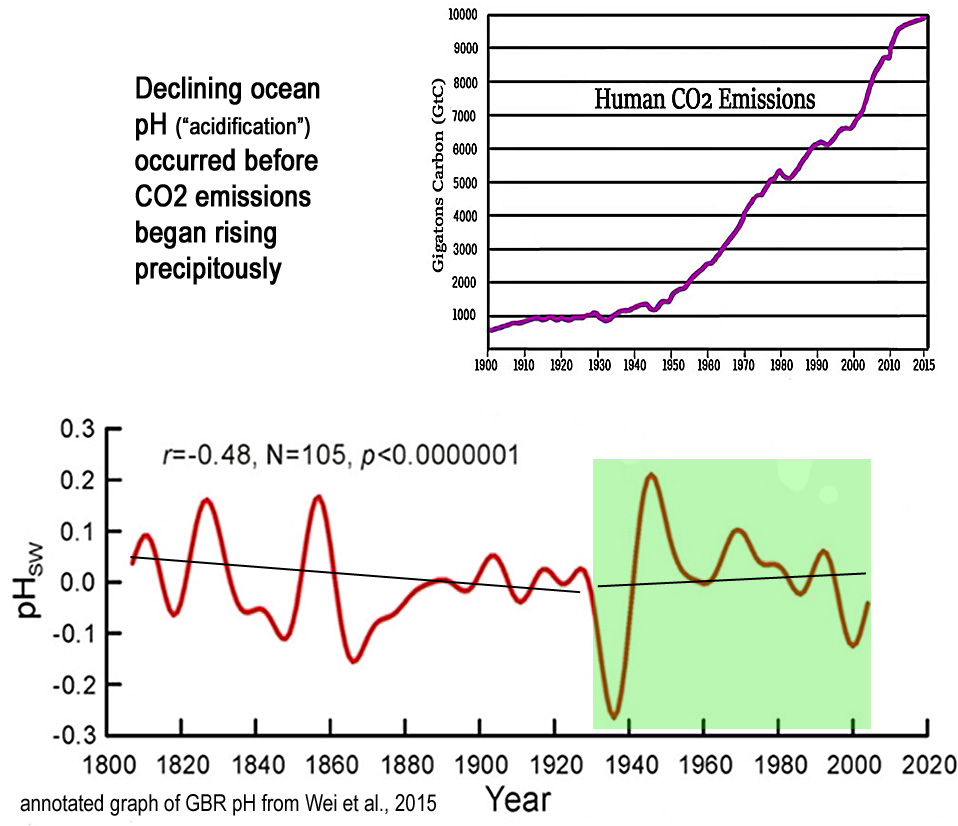 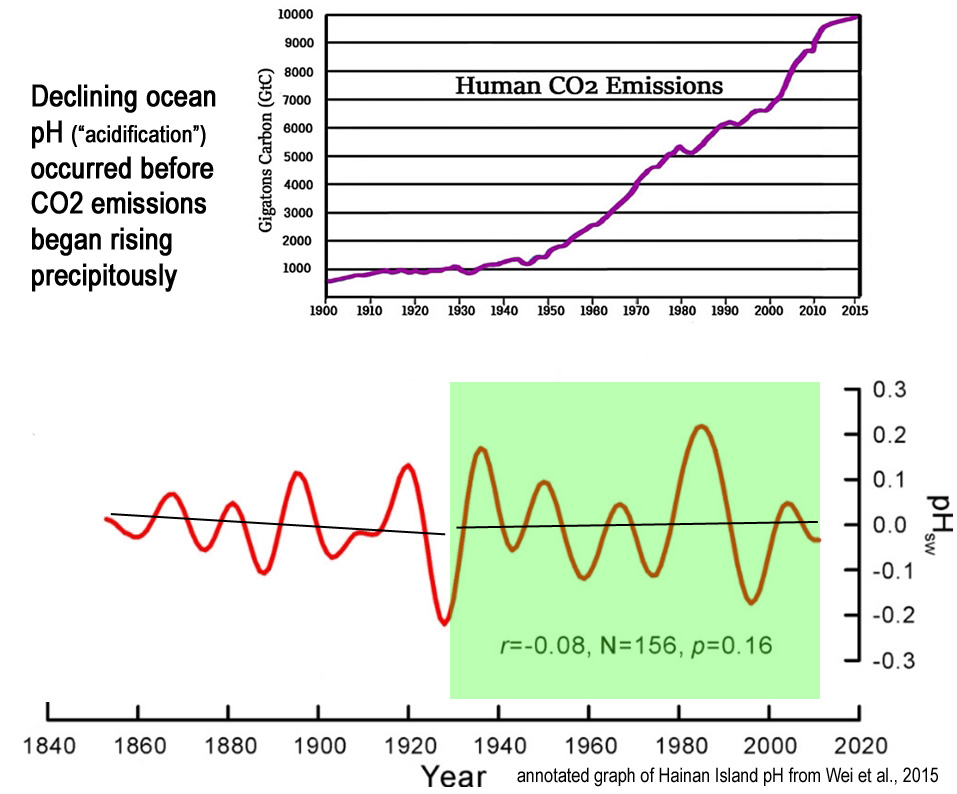