Last week, the Washington Post picked up on the likelihood that 2018 would be the first year on record without a violent (EF-4 and EF-5) tornado in the US. (There has apparently been one EF-4 in Manitoba).

I have been waiting for the year to actually finish, and can confirm that provisional NOAA data shows that this is true:

In the whirlwind that is 2018, there has been a notable lack of high-end twisters.

We’re now days away from this becoming the first year in the modern record with no violent tornadoes touching down in the United States. Violent tornadoes are the strongest on a 0 to 5 scale, or those ranked EF4 or EF5.

While we still have several days to go in 2018, and some severe weather is likely across the South to close it out, odds favor the country making it the rest of the way without a violent tornado.

If and when that happens, it will be the first time since the modern record began in 1950. As we can see from the graph, this is not a one off event last year. There has been a definite trend to declining numbers of violent tornadoes. It is also significant that we have now completed five years without an EF-5 tornado. The longest such spell on record was seven years, between 2000 and 2006, but on average there are 0.8 EF-5s a year.

It also looks as if the number of EF-3 tornadoes will be a record low as well, with a provisional total of ten. The previous low was twelve in 1987.

Roger Pielke Jr has also updated his 2013 paper on tornado damage, to include data up to 2017:

His data mirrors the trends in violent tornadoes.

Final confirmation of total tornado numbers usually comes out in March, but preliminary data suggests that 2018 will be well below the 2005-15 average. 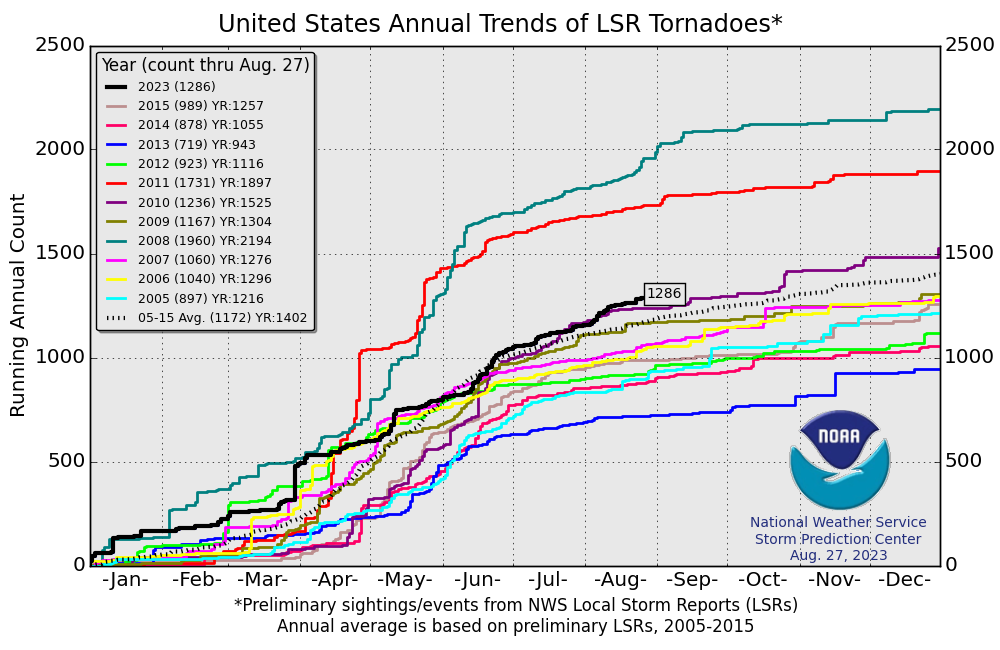