New Science: A Main Tenet Of Anthropogenic Global Warming Has Been Falsified By Observations – ‘No detectable global-scale human influence on the Earth’s hydrological cycle’

New Science: A Main Tenet Of Anthropogenic Global Warming Has Been Falsified By Observations

New Science: A Main Tenet Of Anthropogenic Global Warming Has Been Falsified By Observations

Climate models postulate that increasing CO2 concentrations will intensify the Earth’s water cycle. This intensification is believed to eventually result in dangerous (3°C and up) global warming. Observational evidence has thus far falsified these IPCC-endorsed claims.

According to climate models, water vapor and precipitation trends were supposed to have been enhanced as a consequence of rising anthropogenic CO2 emissions.

And yet after compiling decades of observational and evidence, it has been determined there has been no detectable global-scale human influence on the Earth’s hydrological cycle. 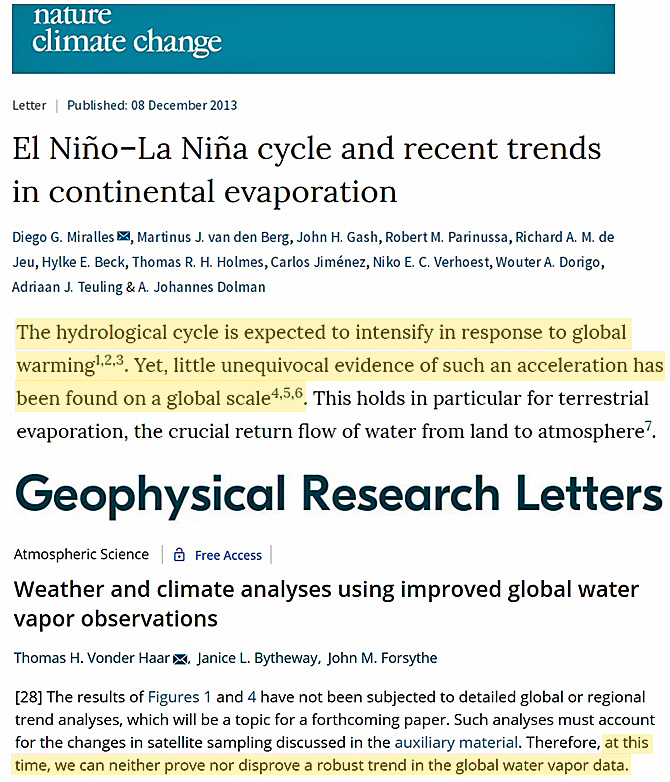 There have been many new scientific papers published that document the observed lack of any detectable global trends in the Earth’s hydrological cycle during the last century, or since anthropogenic CO2 emissions began rising dramatically.

Without water vapor-induced temperature amplification, the model-based consequence of doubling CO2 concentrations to 560 ppm (from the pre-industrial 280 ppm value) is a warming of just over 1°C. This temperature change is neither dangerous or even concerning.

Simply put, the lack of supporting evidence for an anthropogenic intensification of the hydrological cycle effectively decimates a cornerstone of the dangerous anthropogenic global warming narrative.

“Little dispute surrounds the observed global temperature changes over the past decades. As a result, there is widespread agreement that a corresponding response in the global hydrologic cycle must exist. However, exactly how such a response manifests remains unsettled. Here we use a unique recently developed long-term satellite-based record to assess changes in precipitation across spatial scales. … Our results show opposing trends at different scales, highlighting the importance of spatial scale in trend analysis. Furthermore, while the increasing global temperature trend is apparent in observations, the same cannot be said for the global precipitation trend according to the high-resolution dataset, PERSIANN-CDR, used in this study.”

“Figure 2 shows the changes in precipitation volume over oceans and continents during the past 3 decades. As shown in Figs. 2b and 2c, fluctuations are present in the total amount of precipitation that has fallen over land and ocean; however, no significant long-term volumetric change is observed for either case.”

“The take-home message from our study using the new 33+ years [1983-2015] of high-resolution global precipitation dataset is that there seems not to be any detectable and significant positive trends in the amount of global precipitation due to the now well-established increasing global temperature. While there are regional trends, there is no evidence of increase in precipitation at the global scale in response to the observed global warrming.” 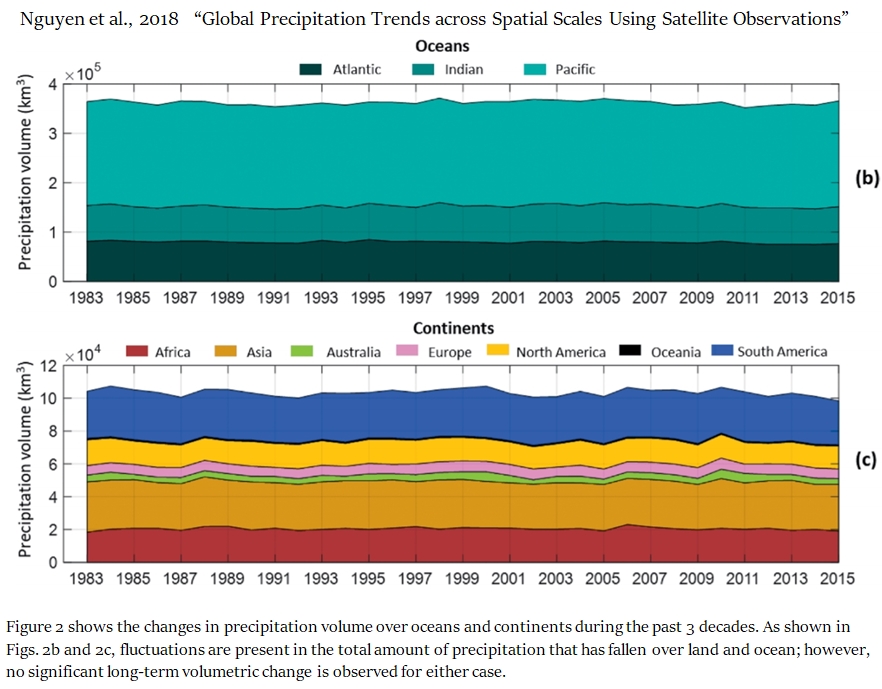 “[C]limate change results are highly model dependent so that even opposite climate change signals may be achieved from different types of climate models. This is mainly due to the fact that climate models with different resolutions and physics provide different representations of surface heterogeneities and mesoscale climatological structures. … We consider a climate change signal to be robust where at least 70% of the models agree on the direction of change. … In contrast to the projected increase in extreme precipitation, there is no robust change in precipitation totals on the global scale.”

“Here, we average four tree-ring width chronologies from the southeastern Tibetan Plateau (TP) over their common intervals and reconstruct the variability in regional relative humidity (RH) from the previous May to the current March over 1751–2005. In contrast to the summer drying associated with centennial-scale warming and the weakening of the Asian summer monsoon, our RH [relative humidity]reconstruction shows no significant centennial trend from the 1820s through the 2000s.”

“The confidence for drought changes over large sections of the world remains low [Field et al., 2012, p. 171]. Greve et al. [2014] and Sheffield et al., [2012] confirmed and further reinforced such low confidence, showing that over much of the global continents, robust dryness tendencies failed to be detected. Thus, the AR5 projections [Stocker et al., 2013, p. 20] that “the contrast in precipitation between wet and dry regions and between wet and dry seasons will increase” (summarized as a “dry gets drier” pattern) does not emerge as a robust feature in observational records, especially after adjusting the definition of dry and wet areas [Greve and Seneviratne, 2015].”

“[T]he attribution of rainfall trends to human influence on local and regional scales is not yet possible (Sarojini et al., 2016).” 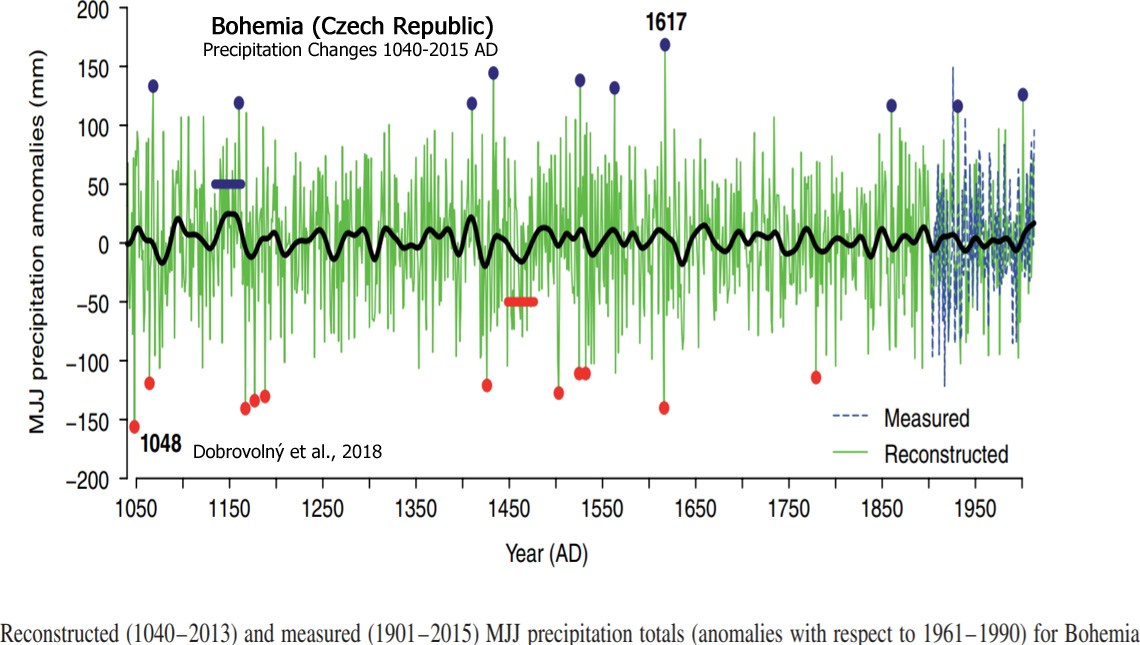 “Also not significant are the trends in extreme precipitation (beyond 1.75 in. and beyond 3.5 in.) with significant inter-annual and interdecadal variability.” 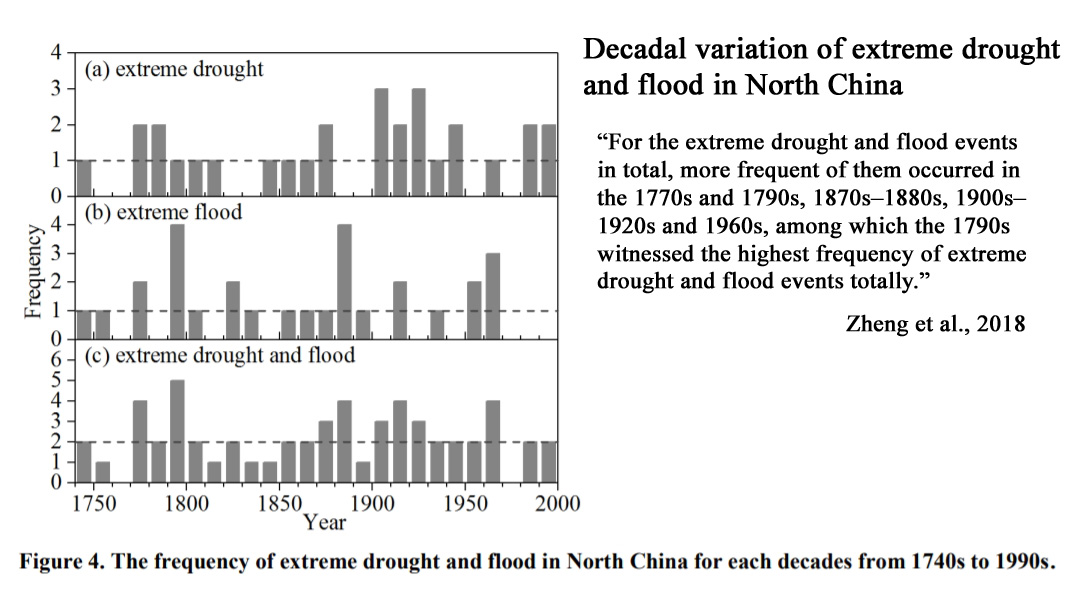 “Flood events on the U.S. East Coast are not more severe or frequent than in the past.” 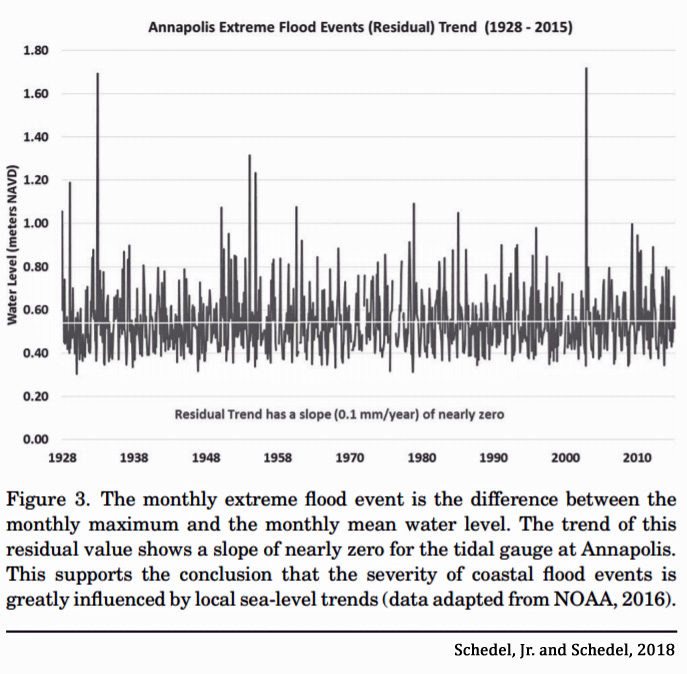 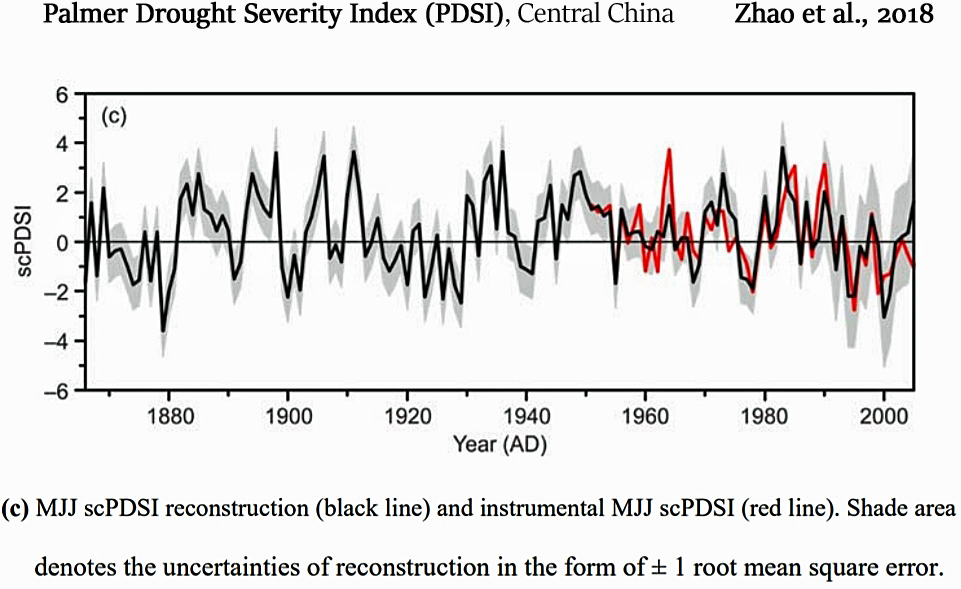 “Overall, the inter-annual and inter-decadal variability of rainfall and runoff observed in the modern record (Coefficient of Variation (CV) of 22% for rainfall, 42% for runoff) is similar to the variability experienced over the last 500 years (CV of 21% for rainfall and 36% for runoff). However, the modern period is wetter on average than the pre-instrumental (13% higher for rainfall and 23% higher for runoff). Figure 9 also shows that the reconstructions contain a number of individual years (both wet and dry) of greater magnitude than what has been recorded in the instrumental record.” 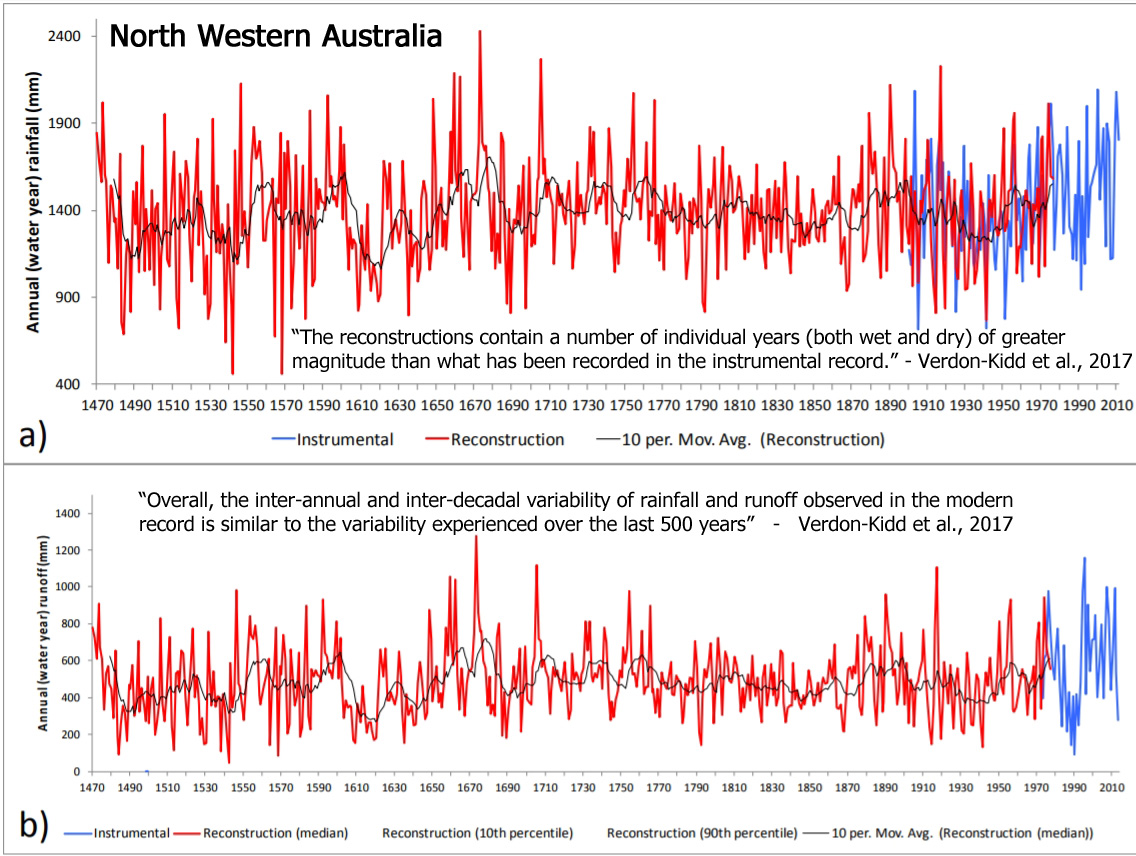 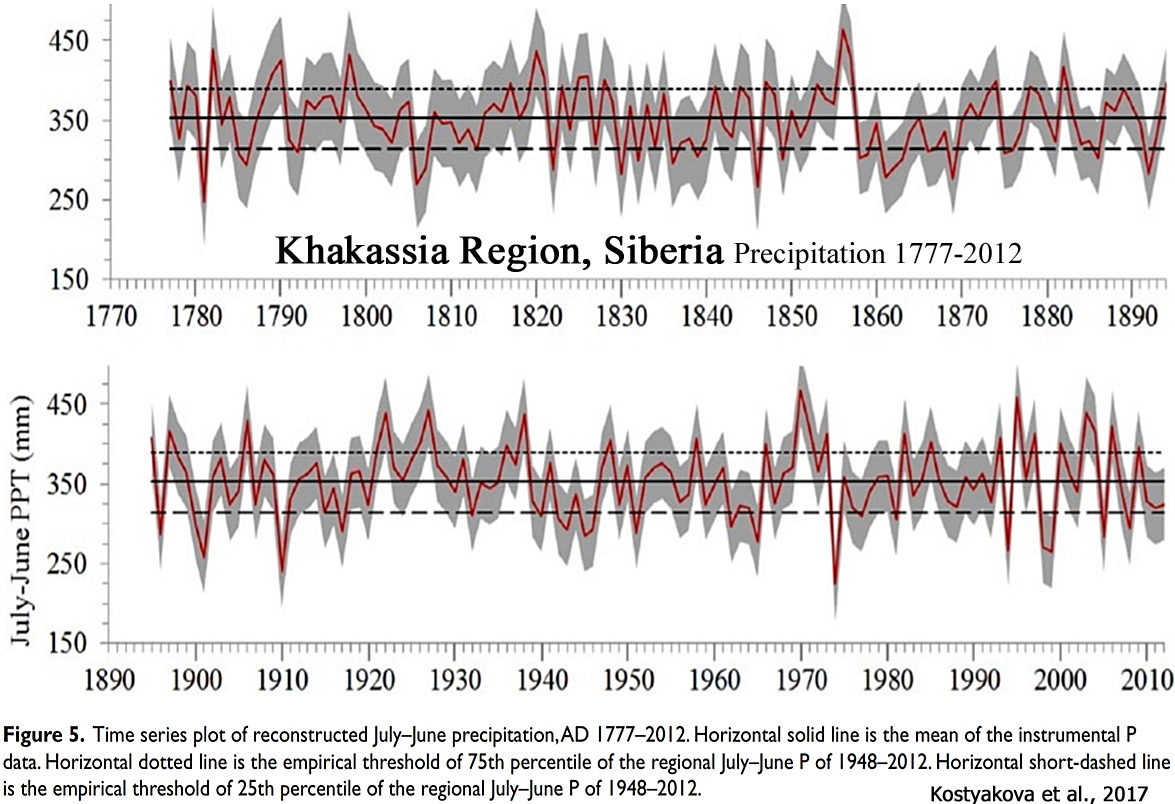 “20th century precipitation variability in southern Tibet falls within the range of natural variability in the last 4100 yr, and does not show a clear trend of increasing precipitation as projected by models. Instead, it appears that poorly understood multidecadal to centennial internal modes of monsoon variability remained influential throughout the last 4100 yr. … Until we have a predictive understanding of multidecade to multi-century variability in the Asian monsoon system, it would be wise to consider the risk of prolonged periods of anomalously dry and wet monsoon conditions to be substantial (Ault et al., 2014). Such variability may also explain why the predicted anthropogenic increase in Asian monsoon precipitation is not widely observed.” 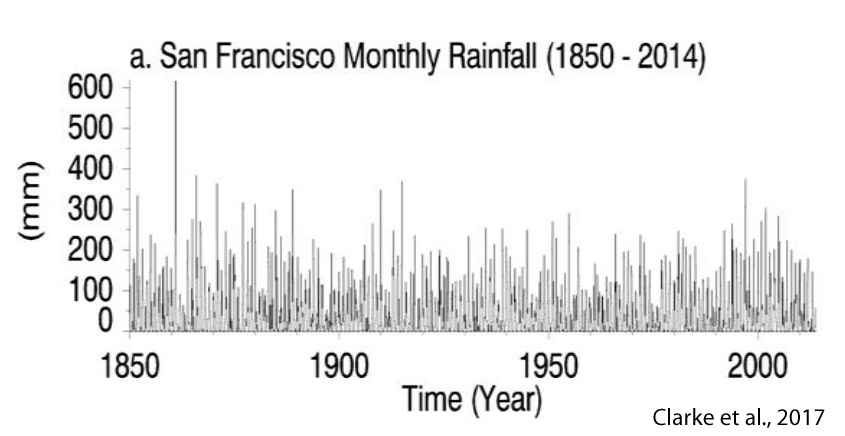