Released During the UN Climate Summit in Katowice Poland (COP 24)

“One Word: Plastics.” Yes, just 51  years after the 1967 film “The Graduate”, “plastics” just may be the future of environmental scares, eclipsing the man-made climate scare. But this “plastics crisis” attempts to make people “feel guilty and worried about a ‘crisis’ which isn’t actually real,” according to a blockbuster new report by a team of international scientists.

There is evidence that some climate activists are seeking to elevate the plastic ‘crisis’ above the climate ‘crisis.’ Former Vice President Al Gore’s producer of his 2006 film “An Inconvenient Truth,”  — Hollywood eco-activist Laurie David — has been test-marketing the plastic eco-scare.

David has touted the plastic crisis over man-made climate fears. “Plastic waste is in some ways more alarming for us humans than global warming,” David wrote in 2009.

“The rapid rise in global plastic production is leading to a rise in plastic pollution and its devastating effects on our oceans and our lives.,” Laurie David wrote.

“This insidious invasion of the biosphere by our plastic waste is in some ways more alarming for us humans than global warming. Our bodies have evolved to handle carbon dioxide, the nemesis of global warming, indeed, we exhale it with every breath. Plastic, though present in the biosphere from the nano scale on up, is too stable a molecule for any organism to fully assimilate or biodegrade. So we have a situation in which a vector for a suite of devastating chemicals, chemicals implicated in many modern diseases, is now invading the ocean, our bodies and indeed, the entire biosphere. The prognosis for improvement in this situation is grim.”

In recent years, the plastic ‘crisis’ reached a new level of hysteria, reaching a crescendo in 2018.

But Greenpeace founding member and Ecologist Dr. Patrick Moore — who has turned against the organization —  responds to the plastics scare:

“What I don’t get is why it is assumed that a bit of plastic in your digestive tract is probably ‘harmful.’ This is the same plastic nearly all our food is packaged, transported, stored, and often served in. It is essentially inert and with the main exception of PVC, which contains chlorine, is made of 100% carbon and hydrogen. And because it is so inert it goes right through us like a small pebble or the cellulose in a kernel of corn.

Now the ‘sea of plastic garbage’ is the ‘size of Alaska.’  Last month it was ‘the size of Texas’ yet no satellite photo has been presented because the sea of plastic is a fiction. The ultimate in Fake News.” 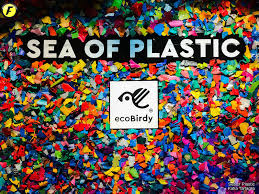 The new report finds that “Greenpeace is deliberately misleading the public by fabricating a fictional ‘crisis.’ and “the infamous ‘oceanic garbage patches’ are not nearly as dramatic as people think.”

“It is making people feel guilty and worried about a ‘crisis’ which isn’t actually real,” the new report notes.

The report finds: “The Greenpeace narrative is largely fabricated, and is based on cherry-picked distortions of the scientific literature.”

“Some scientists are genuinely concerned about the fact that concentrations of ‘microplastics’ in some parts of the oceans are relatively high. However, the concentrations that they are talking about are relatively modest, e.g., a few hundred fragments per square mile in the worst regions,” the report concludes. “Also, the average sizes of these plastic fragments are very small, e.g., less than 1/16 inches in diameter…Despite this, Greenpeace has been actively misleading the public to create the perception that there are massive floating ‘islands’ filled with plastic bottles, plastic bags and other plastic debris,” the report notes. “They are deliberately misleading the public by fabricating a fictional ‘crisis’ and trying to turn it into an excuse to abandon ‘single-use plastics.”

Greenpeace has been hyping the alleged plastic “crisis” and are using it as “an excellent excuse to blame the western world for their ‘overconsumption,’” according to the new report. “They decided to start campaigning for ‘Zero Waste’ and insisting that we needed to completely stop using ‘single-use plastics’ to protect the oceans.”

“Where exactly the plastic is coming from. Greenpeace and others are implying that the developed world is to blame (particularly Europe and North America), but several studies have now confirmed that the problem lies almost entirely with certain developing nations – chiefly in Asia.”

Greenpeace, some media channels, and other environmental activist groups (and to be fair, some scientists too) have used these alarming-sounding names to ridiculously exaggerate the phenomenon, and create the completely false impression that there are these horrendous floating “islands” of our plastic waste somewhere “out there”…

Greenpeace’s latest campaign on “the plastics crisis” is having the following effects:

It is making people feel guilty and worried about a “crisis” which isn’t actually real.

It is prompting people, governments and businesses to implement radical reforms without thinking through the consequences.

It is hampering efforts to evaluate and deal with the genuine “ocean plastic pollution” concern.

In addition, “despite Greenpeace’s repeated claims, we now know that the ingestion of plastic particles by seabirds doesn’t seem to be having any ill effects on the birds,” the report notes.

This new report examines whether or not the Earth is experiencing a plastic “crisis” and the scientific finding is a resounding ‘No’.

(Also see: Blockbuster report about Greenpeace’s operations released by team of scientists – ‘Greenpeace wants a piece of your green’)

Steve Milloy of JunkScience.com: “Plastic is fantastic. It helps the environment by reducing demand for scarcer, harder to produce, more energy intensive resources.”