COP 24: CFACT with the gilets jaune

COP 24: CFACT with the gilets jaune

Hundreds of French people in yellow vests advanced along the Marseilles waterfront.

As CFACT covered the march, two armored cars approached from the opposite direction.

A lone woman ran forward and situated herself in between, waving a yellow kerchief which smartly coordinated with her yellow vest. The Berliet VXB-170 twelve ton behemoths continued their advance.

The woman stood her ground. With the approaching force just feet away, she threw wide her arms and defied them. For a moment, one brave héroïne slowed the power of the state to a crawl. The next, a police officer in full riot gear swept her aside, and a platoon of police marched onto the scene.

Undaunted, the protestors continued until the police gave way.

The picture and video Adam Houser took of this modern day “Marianne” having a courageous “Tiananmen Square” moment are CFACT exclusives.

it. We are uniquely effective. Without our friends all this would stop. Will you make a gift right now and keep us in the fight?

CFACT used the weekend break at COP 24, the UN climate conference in Poland, to head to France to do some research. After interviewing many gilets jaunes (yellow vests), and observing their demonstrations, CFACT can report that the streets belong not to the government, nor to the police, but to the men, women and children in the yellow vests. Moreover, contrary to what you may have seen in the media, in their hearts, the police are with the protestors.

The demonstrators are in fact the friends, neighbors and families of the police arrayed against them. Except in extreme cases, the police are standing aside and leaving the gilet jaunes in charge. 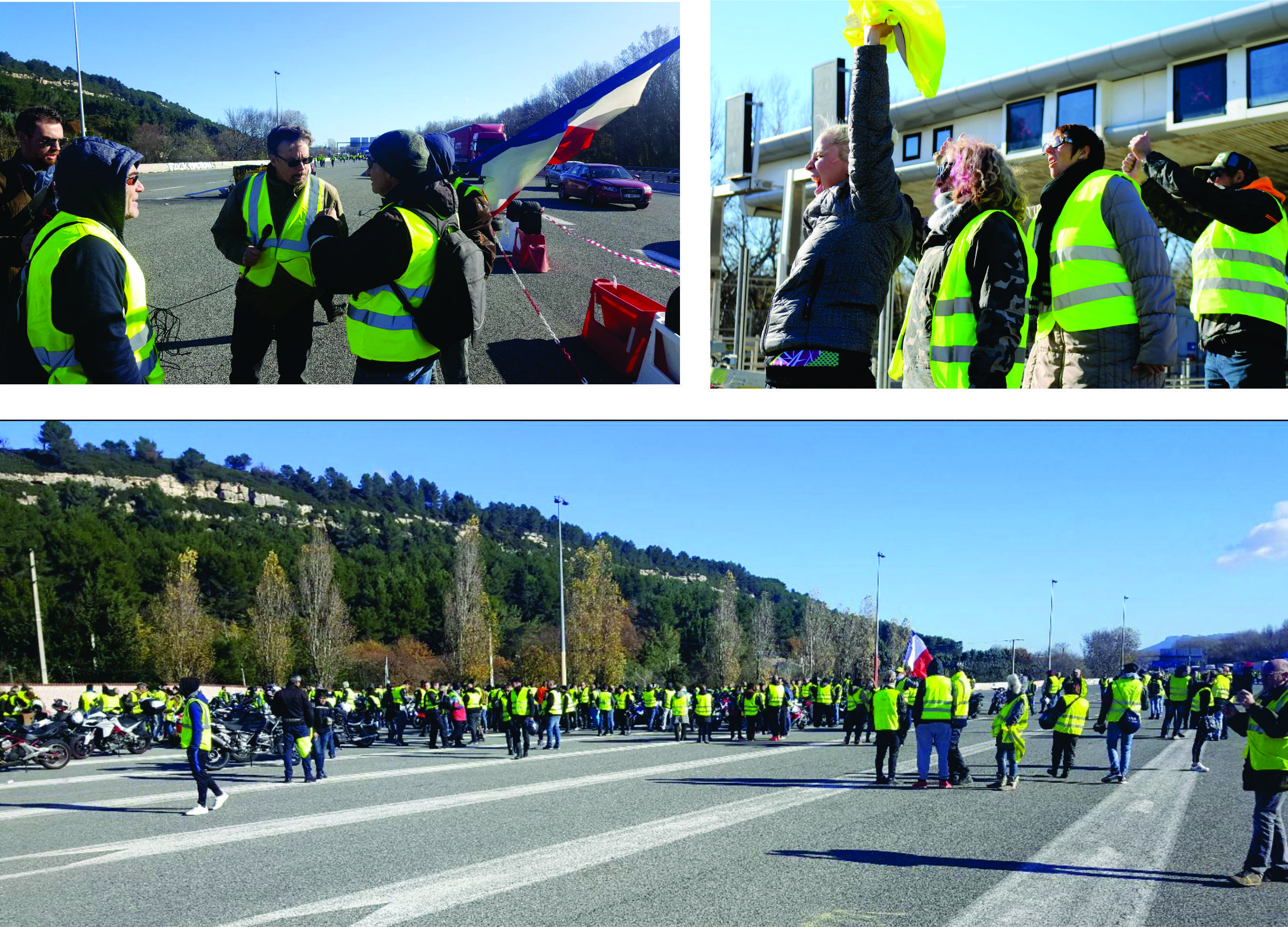 There’s a lot of misinformation out there. We’ve all seen images from Paris and other cities of masked hooligans in yellow vests smashing windows and setting fires. Nearly all of this violence has come from radical leftists who never miss a chance to riot. CFACT encountered these same thugs three years ago in Paris during UN COP 21, well before anyone thought to don a yellow vest. The real gilets jaunes are upset that their president and the media are using the violent thugs to smear them. The average French observer knows the protesters. They get it. Will the French government succeed in smearing the earnest, nonviolent people in the yellow vests elsewhere around the world?Moreover, just about everyone with an agenda is trying to horn in. This includes climate campaigners who are trying to claim the gilets jaunes as their own. They’ve posed in yellow vests for the media during carefully staged climate events. Don’t buy it for a second. We spoke with a wide assortment of protesters and asked them point blank. (Video to follow). Climate taxes? “They are BULL SHIT” is among the more genteel exclamations that question engenders.

Here are the straight facts:

The gilets jaunes represent a broad cross section of the French working and middle classes. They are butchers, bakers and automobile makers. They are the folks who drive the trucks, farm the food, build the buildings and fix what breaks. They are France. They have had enough.

The gilets jaunes took over a large toll station on the road to Marseilles. CFACT was there. They narrowed the lanes, but allowed traffic to pass. Toll collectors and police left them completely in charge. The protestors did not allow motorists to pay the toll. They are prepared to starve leviathan.

France, like many European nations, has gone much further down the UN climate road than Americans have. They are already feeling the pain that Californians and so many others have in store. Climate taxes on fuel to pay for inefficient, variable wind and solar power and other climate fantasies are a waste, and the folks in the yellow vests know it. They refuse to redistribute more of what they earn in the name of global warming. They realize that climate taxes are regressive, and resent the elites with the means to take confiscatory taxes in stride. President Macron has vowed to suppress and outlast the protestors. He has no idea. He also has no friends among them.President Macron declared, “We have to tax fossil fuels more in order to fund our investments in renewable.” Then, when faced with mass protests, he suspended the most hated climate tax for six months. The protesters see right through this. Saturday their battle cry was, “we stay on our course.”

Over 120,000 nice, normal, fed up French citizens took to the streets in every corner of their country

Saturday. President Macron deployed 89,000 police and 80 of those armored cars to stop them. He failed.

Thank you to everyone who chipped in to make our work possible. We can’t wait to share with the UN what we learned in France! We keep finding so much more to do. Will you give right now and help us do it?

The yellow vest protestors are right on the merits. Their movement has already spread to Belgium and the Netherlands. Who will be next?