KATOWICE, POLAND (December 6, 2018) – The Heartland Institute and representatives of Solidarity, the historic labor union founded by Nobel Peace Prize winner Lech Walesa that helped bring down the Iron Curtain, signed a joint statement on Wednesday calling on the United Nations at COP24 to ensure the “restoration of the Scientific Method and the dismissal of ideological dogma at the United Nations.” 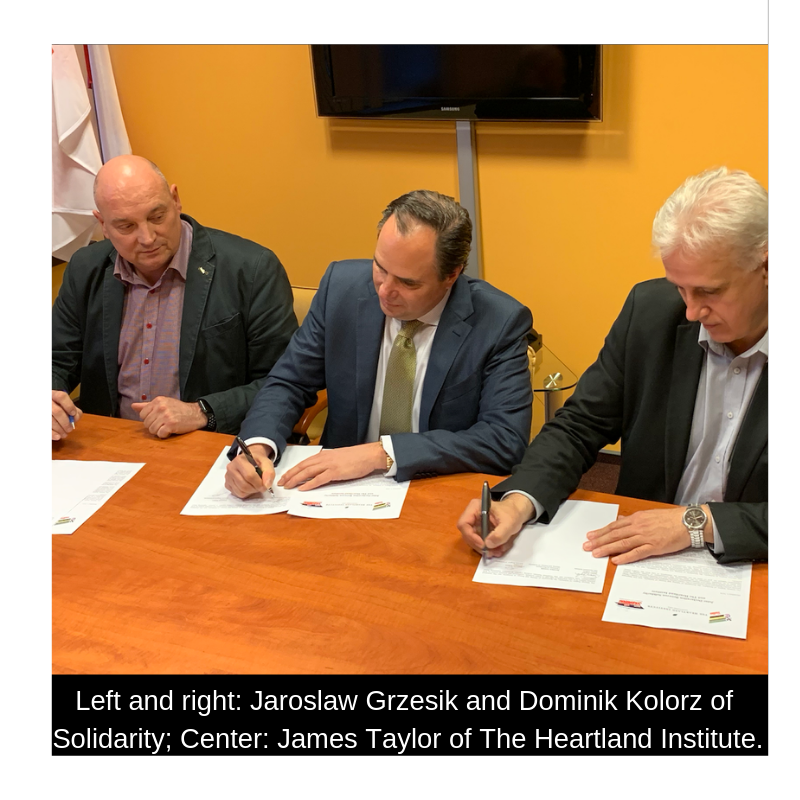 The joint statement, created at Solidarity’s prompting and written cooperatively between the two organizations on December 5, was submitted to the UN Conference of the Parties climate conference in Katowice today.

“The Silesian Region of Solidarity, the Secretariat of Mining and Energy of Solidarity, and The Heartland Institute express skepticism of the assertions of the United Nations Intergovernmental Panel on Climate Change that the world stands at the edge of a climate catastrophe,” said the statement. “Solidarity and The Heartland Institute together stress that there is no scientific consensus on the main causes and consequences of climate change.”

The joint statement was signed by Jaroslaw Grzesik, Chairman of Secretariat, Mining and Energy of Solidarity; Dominik Kolorz, president of the Silesian Region of Solidarity; and Heartland Institute Senior Fellow for Environment and Energy Policy James Taylor, who represented the organization.

Solidarity took the initiative in 2014 to translate from English to Polish Climate Change Reconsidered II: Physical Science – part of a series of scientific reports by the Nongovernmental Interntional Panel on Climate Change (NIPCC) – and invited Heartland to its office in Katowice on December 5 to give presentations on the latest climate science and the failure of green energy plans in neighboring Germany. The latter presentation was delivered by Wolfgang Müller, general secretary of the European Institute for Climate and Energy (EIKE).

The communique states that Solidarity’s Katowice representatives were “very satisfied by the new science and policy presentations from Heartland during their COP24 meeting,” adding that “the presentations assured Solidarity that their doubts about current, alarmist climate policy are correct.”

“We, speaking as one, believe in the restoration of the Scientific Method and the dismissal of ideological dogma at the United Nations,” the joint statement said. “That means a healthy skepticism of data interpretation and policy conclusions and an end to the war on science and scientists by powerful state-backed forces.”

· Global leaders should focus their efforts on energy affordability and availability that raise living standards around the world.

· The negative impacts of expensive energy on human health and welfare are manifest and devastating.

· Affordable energy is absolutely necessary to lift people out of poverty and secure a brighter future for the people of the world.

· The most important joint task will be educating the public and policy makers on climate policy, “especially the world’s youth” – who have been indoctrinated by climate alarmist dogma for generations.

“Solidarity has proven time and again that it will stand up the common man against the ruling elites,” Taylor said. “Solidarity, like the Heartland Institute, does not shy away from pointing out flaws in the United Nations’ asserted climate crisis. Sound science is on our side and we are honored to work closely, now and in the future, with Solidarity.”