Scientists have increasingly determined that today’s Arctic sea ice concentrations are still much higher than they have been most of the last several thousand years, undermining claims that modern era Arctic sea ice changes are remarkable, unusual, or unprecedented. 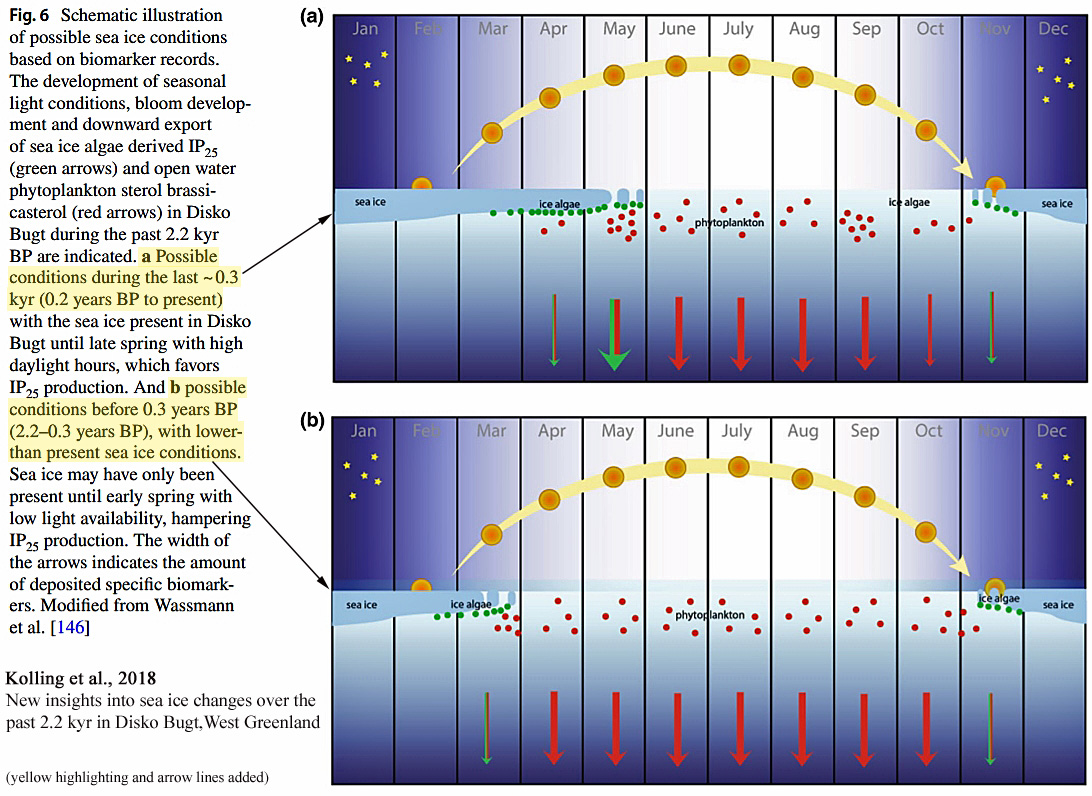 In the graphical illustration of Late Holocene West Greenland sea ice changes shown above, Kolling and colleagues (2018) indicate that both present-day and Little Ice Age era (~1300s to 1800s AD) sea ice does not melt until May, or late spring (Fig. 6a).

During most of the last 2,200 years — especially during the Medieval Warm Period (MWP) and Roman Warm Period (RWP) — spring sea ice melted in March, two months earlier than today (Fig. 6b).

The authors attribute the lower-than-today sea ice concentrations and warmer temperatures during the MWP and RWP to a “self-amplifiying system” involving variations in solar activity and the AMO. Atmospheric CO2 concentrations are not mentioned in the paper as a factor influencing sea ice changes.

“The period between 2.2 and 1.2 kyr BP, with lower than modern sea ice conditions in Disko Bugt (Fig. 6b), coincides with generally warm conditions over the Greenland Ice Sheet.” 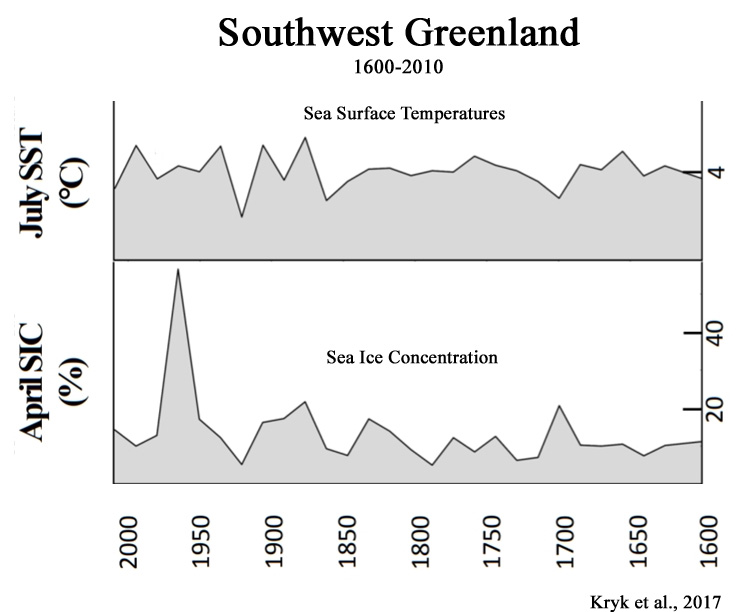 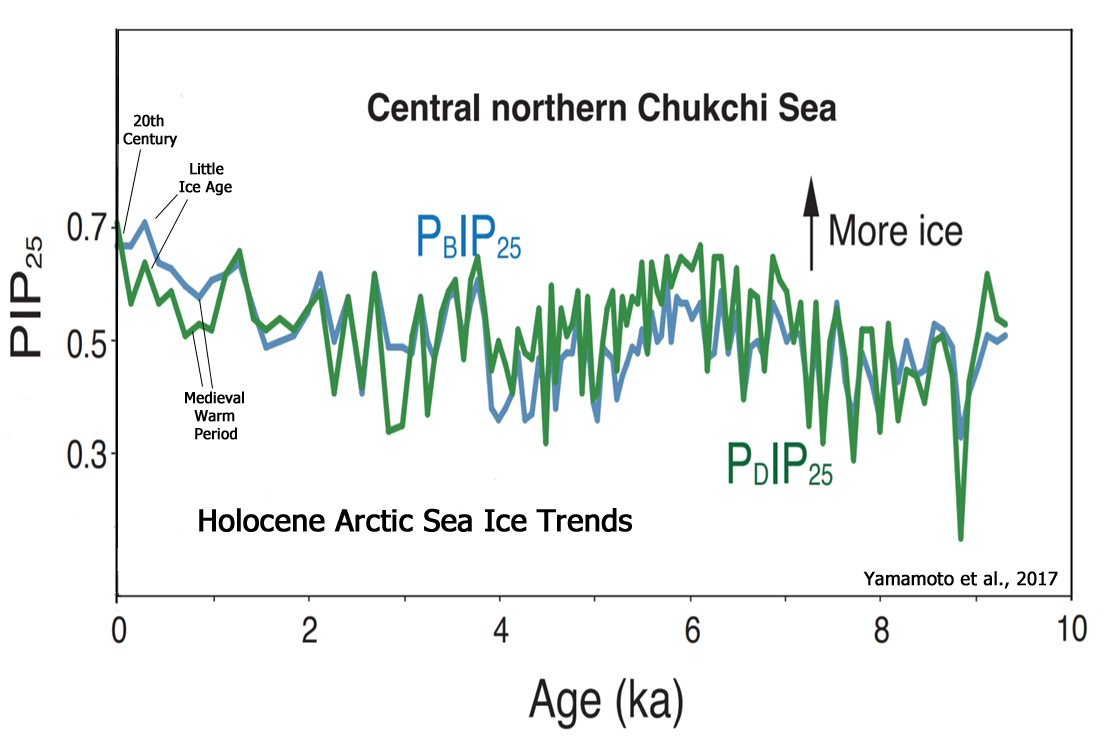 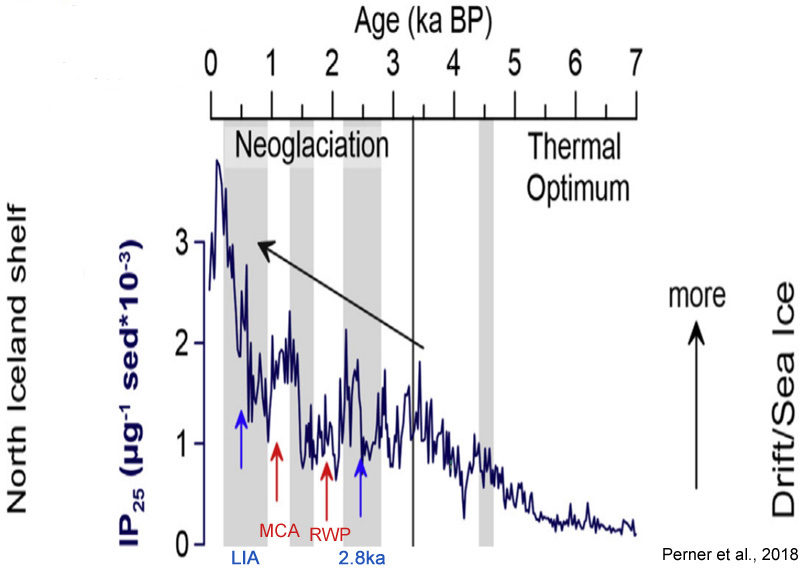 The lack of any unusual or remarkable change in sea ice conditions during the modern era relative to the past suggests there is a lack of conspicuous connection between rising anthropogenic CO2 emissions and the Arctic climate.

New insights into sea ice changes over the
past 2.2 kyr in Disko Bugt, West Greenland

“Our biomarker record indicates that Disko Bugt [West Greenland] experienced a gradual expansion of seasonal sea ice during the last 2.2 kyr. Maximum sea ice extent was reached during the Little Ice Age around 0.2 kyr BP. Superimposed on this longer term trend, we find short-term oscillations in open water primary production and terrigenous input, which may be related to the Atlantic Multidecadal Oscillation and solar activity changes as potential climatic trigger mechanisms.

“The period between 2.2 and 1.2 kyr BP, with lower than modern sea ice conditions in Disko Bugt (Fig. 6b), coincides with generally warm conditions over the Greenland Ice Sheet.”

“During the last 0.1 kyr, all biomarker concentrations showed an increase, brassicasterol and HBI III reach maximum values in the uppermost sample(80 µg/gTOC and 1.8 µg/gTOC, respectively; Fig. 3b, d).” 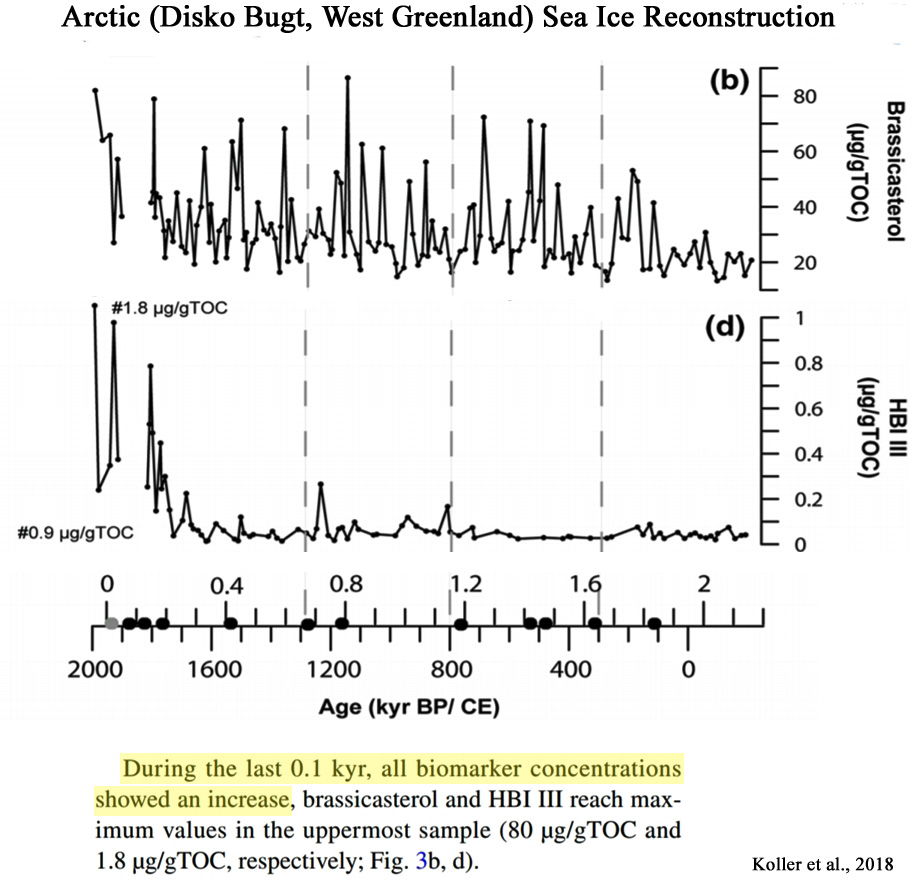 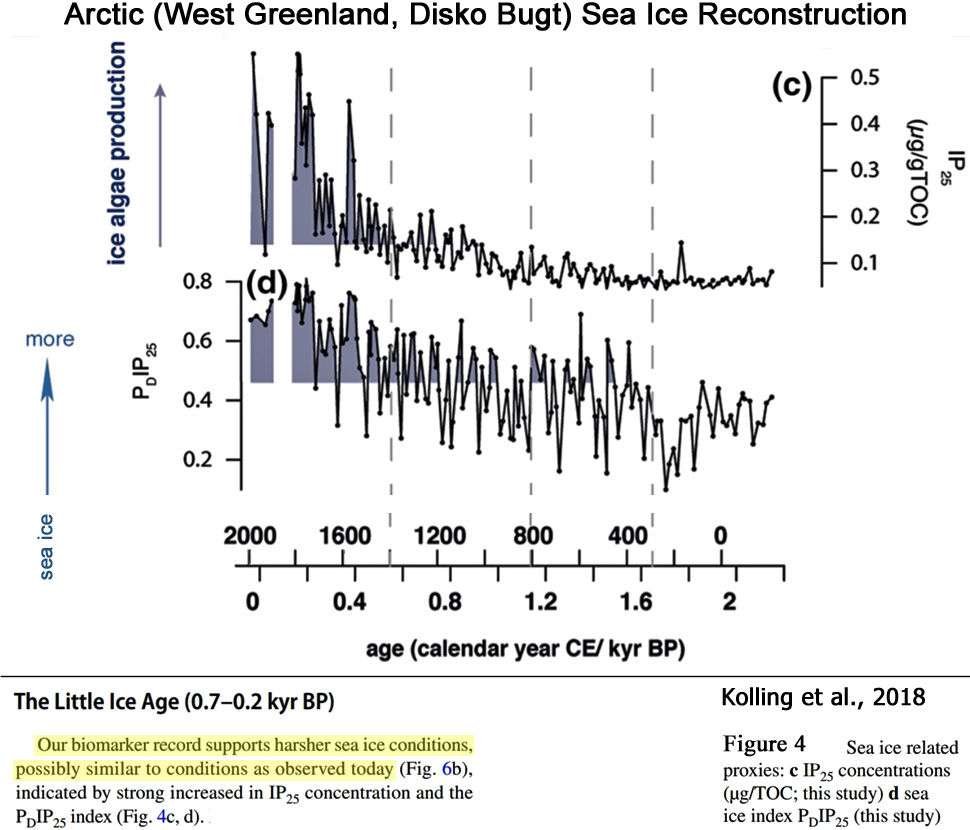 “We find that the Disko Bugt area was influenced by seasonal sea ice over the last 2.2 kyr BP. The overall sea ice trend indicates a development from a reduced sea ice cover during early spring, with sea ice algae productivity hampered by light availability to a gradual extend of the sea ice season from 1.2 kyr BP onwards. This change in sea ice extend is parallel to decreasing Northern Hemisphere atmospheric temperatures and culminates in the Little Ice Age around 0.2 kyr. We assume that modern conditions, with sea ice present until late spring and the presence of a stable ice edge at Disko Bugt, established around that time [~200 years ago].”