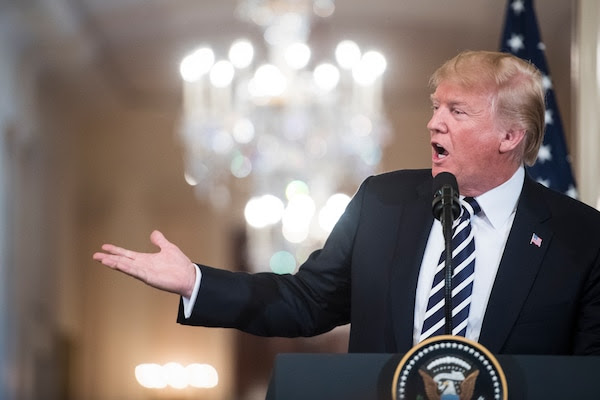 President Trump intends to nominate Kelvin Droegemeier, an expert in extreme weather from the University of Oklahoma, as his top science and technology adviser at the White House, according to an administration official.

Droegemeier’s selection, if approved by the Senate, could soon end a roughly 19-month vacancy at the top of the Office of Science and Technology Policy — a critical arm of the White House that guides the president on such issues as self-driving cars, artificial intelligence, emerging medical research and climate change.

Droegemeier is a meteorologist by trade who has also served in government, including as Oklahoma’s secretary of science and technology, and he aided the federal National Science Board under former presidents George W. Bush and Barack Obama. The Washington Post first reported him as a front-runner for the post in March.

His selection drew early praise from the scientific community Tuesday. “I think he’s a very solid choice,” said John Holdren, the former director of the Office of Science and Technology Policy under Obama. “He’s been a serious climate scientist, and he’s been a serious science adviser to people in positions of influence.”

Yet Droegemeier still may have to overcome a tough Senate confirmation process, given that Democrats and Republicans have regularly locked horns over many of Trump’s nominees. This time, some Democrats could turn Droegemeier’s selection into a moment to fight the president on his energy and climate policies, more than a year after Trump announced plans to withdraw the United States from a major international carbon-reduction treaty.

Marcia McNutt, the president of the National Academy of Sciences, said Tuesday in an interview that she was “not sure what his personal views” are on climate science. But she praised Droegemeier’s character and pedigree. “As an atmospheric scientist, he will understand these weather-related problems are connected to the climate system as well, and weather and climate are intricately connected.”

“He will have to walk a very careful line given the president’s very strong views on this, but we hope he still can be a measured influence with the administration,” McNutt said.

Since Trump has taken office, the White House’s science-and-tech arm, known as the OSTP, has focused much of its work on enabling emerging technologies. Last year, for example, it helped launch a federal program that now allows cities and states to partner with dronemakers to test more autonomous craft, including those that deliver packages, in select locations across the country. In March, the OSTP also helped convene top executives from Amazon, Facebook, Google, Intel and 34 other major U.S. companies as it sought to identify policy proposals that could pave the way for more powerful robots, algorithms and the broader field of artificial intelligence. (Amazon founder Jeffrey P. Bezos owns The Washington Post.)

Since 2017, however, the OSTP has lacked a full-time, Senate-confirmed leader. Its top-ranking official has been Michael Kratsios, who serves as the administration’s deputy chief technology officer. Kratsios joined the White House after working for Peter Thiel, a well-known Silicon Valley venture capitalist who supported the president’s election. The office has also employed fewer staffers than it did under Obama, prompting some Democrats on Capitol Hill last year to criticize the president.