UC Berkeley is just a short drive away, about three hours.

We are often told by the “holier than thou” types who lecture us on the evils of modern energy consumption that we should travel less, reduce our use of fossil fuels, have less children or no children, and suggesting we even kill ourselves for the betterment of the planet.

However, these same people don’t seem to practice what they preach. First, let’s set the stage. For example Eric Holthaus, who is meteorologist and staff writer for Grist (formerly Slate) wailed that he will have a vasectomy to prevent population growth.

Then he said, kids are OK while telling the world how “fucked up it is”, and announces his first child with this tweet:

He’s now reportedly got two children and is in the process of divorce (according to his Twitter feed – his choice to make such details public).

Then there was the flying debacle: 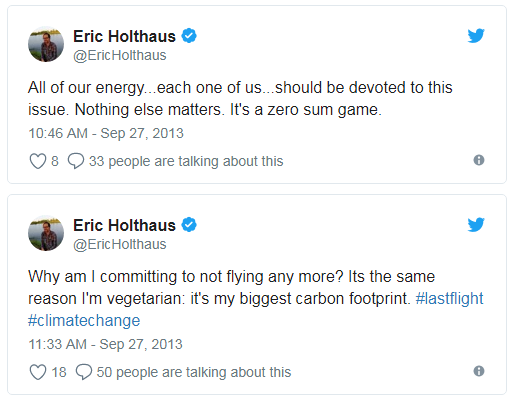 Then a year later, suddenly, flying is OK again.

But he talks about a bus trip that fossil fueled trip is somehow better for the climate than flying as opposed to just staying home. The destination was the American Meteorological Society’s 2014 annual meeting in Atlanta:

Over the past year, I’ve had to make a few small sacrifices, sure. (My 28-hour bus ride from Wisconsin to Atlanta wasn’t the most relaxing travel experience I’ve ever taken. I’d have much preferred one of these.) But an amazing thing has also happened since I’ve embraced slow travel: My world has shrunk and become richer. (It’s also easier to escape those awkward family reunions.)

This article ISN’T about Eric Holthaus, but I used his claims and self-rationalizations as a very epic and public example of climate hypocrisy. Having set the stage, read on.

Yesterday and the day before there was, in Berkeley CA, a large international climate change conference officially titled the “Tenth International Conference on Climate Change: Impacts & Responses”  — here’s its website: http://on-climate.com/

And here’s a PDF of all the seminars presented at the conference:

There were some real gems there, like this one:

However, my finding has little to do with the content of the conference, but with the mind-boggling hypocrisy of its participants.

Although the conference itself (look at the program below) is essentially little more than a gigantic condemnation of humankind’s carbon footprint, the vast majority of the participants took long-distance commercial airplane flights to reach the conference (and return home afterwards); because they’re special and the rules don’t apply to them.

Basically it’s a life-lesson posing as a conference about why people shouldn’t ride on carbon-spewing airplanes – attended exclusively by people who rode on carbon dioxide-spewing airplanes to get there. Of course, they could do this conference entirely over the Internet via via conferencing, slide sharing, and online publication, but what fun would that be? Plus you don’t get to leave your country on a “vacation” to the United States, all expenses paid.

Since we at WUWT find great entertainment in pointing out the outrageous hypocrisy of people like Leonardo DiCaprio and Al Gore who lead extremely high-carbon lifestyles as they jet around the world lecturing everyone about how they shouldn’t lead high-carbon lifestyles, it might be sobering to note that Leonardo DiCaprio and Al Gore are not unusual in the climate change community: the truth is that MOST climate change researchers are equally hypocritical and spend the year constantly jetting around to an endless series of pointless conferences, often in resort destinations.

I got my hands on a copy of the otherwise “secret program” for the conference (which is NOT posted online), which reveals the identities of all the participants and (most importantly) where they came from to reach the conference – which turns out to be from nations all over the world.

I compiled this list of nations from which the participants traveled to Berkeley, California to attend this conference about the need for “low-carbon lifestyles”: I also completed the map below which highlights not only the countries, but the locations from within countries where participants traveled from. Due to pin density issues, not all locations are visible in some places like the Eastern USA. And, some pins may not be exactly accurate in location but approximate, but that doesn’t detract from the story it tells.